Hi guys, it's been a long time since I've posted here. Hope you're all doing well.

Hoping for some advice from more knowledgeable people

I've got a custom shop Penguin that I'd probably had for close to eight years now, maybe more. Bought it in the USA and it lives in Australia now.

I was restringing it tonight and I noticed the mother of pearl inlay had cracked. Another one has looked to have cracked a bit as well, but it's not as severe as this one.

So I've got a few questions: What causes this? Is it possible/worth fixing? Will it cause further problems down the track?

Last time I tried to do a warranty claim on a Gretsch here in Aus they pulled out the "not bought in Australia, not our problem" card so I can't really go the warranty claim route. I've basically gotta decide if I want to spend the money myself to get it fixed. 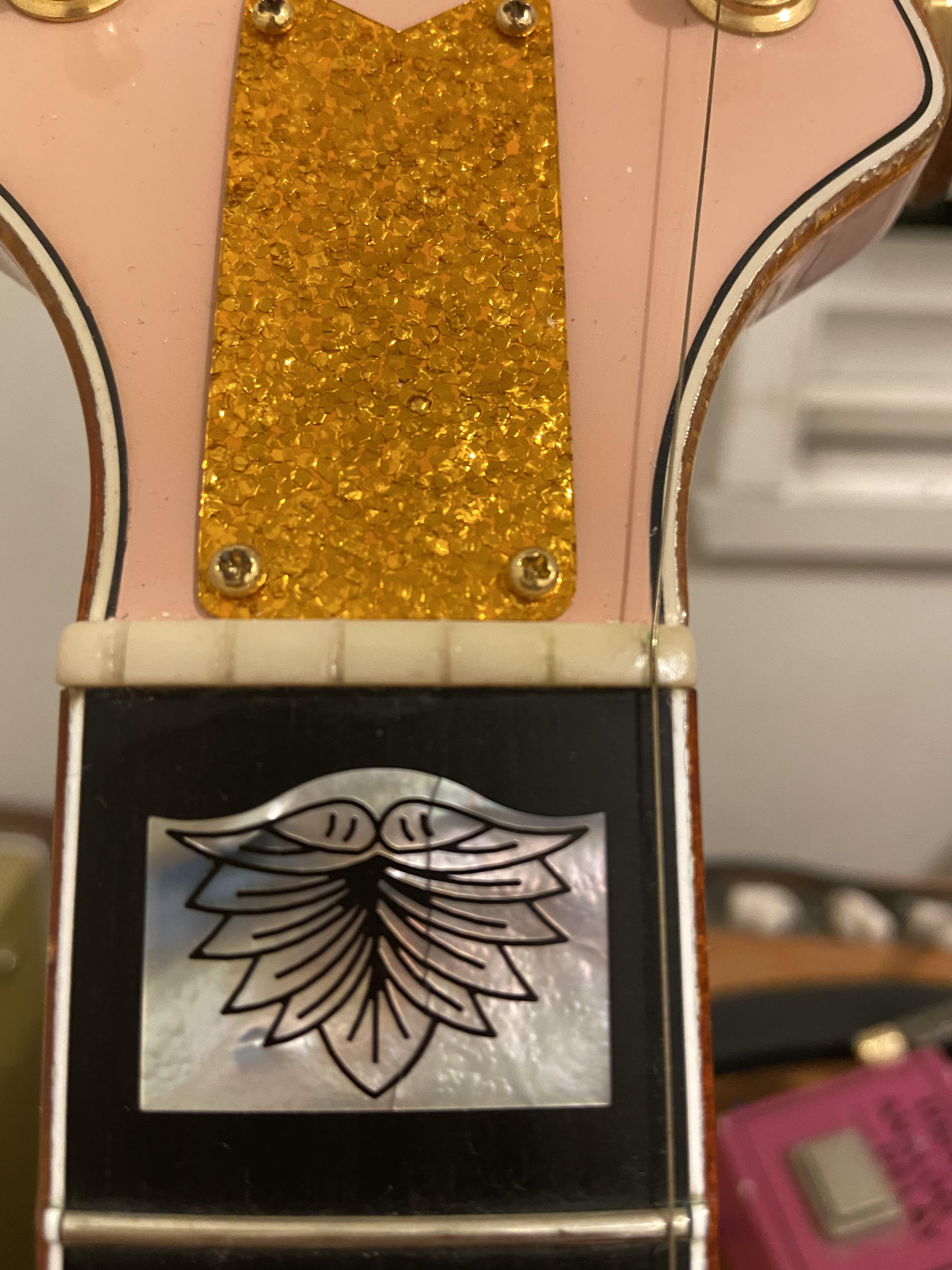 My Bacon Belmont had one inlay that was broken off.The broke edge was sharp and cut my finger. I would see what Curt says.

My Bacon Belmont had one inlay that was broken off.The broke edge was sharp and cut my finger. I would see what Curt says.

You fixed with duct tape, right?

Wow. Never seen anything like that before, even with vintage Gretsches. Clearly, nothing hit it. I'd contact Joe Carducci at Gretsch, especially since this is a Custom Shop Penguin.

You fixed with duct tape, right?

Close. They sell these fake mop stick ons and I put one on temporarily until I could get it to Curt. It worked so well I forgot about.

Never seen that before either. It doesn't seem like something likely to get worse, as long as it's glued in there properly. I'd be tempted to just let it go, but if that's not your inclination, I would say contacting Joe would be a good first step. Maybe these inlays are standardized to the point that they could just send a couple of replacements with confidence that they would fit well enough.

A small dab of superglue, maybe? Just a guess.

Not much of an expert on the MoP, but I would certainly be letting Joe know about the attitude problem that seems to exist in the Australian distributor's mind.

Customer service is paramount. When it falls off, expectations start to lower and the long slippery slope to mediocrity begins..

Not much of an expert on the MoP, but I would certainly be letting Joe know about the attitude problem that seems to exist in the Australian distributor's mind.

Customer service is paramount. When it falls off, expectations start to lower and the long slippery slope to mediocrity begins..

Replacing the markers would be the "right' fix, but I don't think I'd bother. As long as the edges of the crack aren't pulling away from the fretboard, it should be very easy to fill it in. There are many options -- epoxy, white glue, super glue, polyester resin -- any of which, to varying degrees, could be used as a vehicle for matching black and opalescent pigment. Getting said pigment in the right place would be the tricky part.

I would use gloss acrylic medium myself. It's waterproof, doesn't shrink, has a long open time, and there are tons of color options available. It would be really easy to remove later if need be.

I would also be very, very tempted to use nail polish.

Cheers for the answers everyone

I believe Gretsch, like most guitar companies don't offer worldwide warranties so that's that

I might just take it to a luthier and see what they can do. Maybe I should just treat this as an excuse to give me guitar the Merle Travis treatment

I understand your point of view Jose; but, this is a CUSTOM SHOP PENGUIN. You deserve at least to have an answer that offers you the option of purchasing replacement markers. I just cannot fathom that Joe or Stephen Stern would want you just to suck it up and forget it. Good Luck.

Agreed. It sounds to me much like the way the Canadian distributor used to be, until there was an intervention.

Time for another one, Joe?

They get peeved by parallel importing. So the standard response is that if it didn't come through the "official channels" then they have no responsibility for it. I can't say what is right or wrong because i don't know enough about it. But it truly crazy how much cheaper a guitar can be if you import it yourself. Not always, but sometimes.

If the guitar was mine I doubt I would have even noticed that the inlay had cracked. Can you feel the crack? I'd probably just put it down to patina. If it doesn't affect the playability or feel or anything it wouldn't bother me.

Cheers Olivia, Kevin and Jimmy. Sounds like it might be worth trying again, or at the very least trying to get it repaired.

I can feel the crack, but I only noticed it when I was restringing the guitar the other night.

Maybe I will start sending off some emails, or perhaps I might just start with a local warranty repairer and go from there

I would be tempted to put in a warranty claim and only ask for the inlay piece itself. I'd leave well enough alone until such time that the crack became bothersome to play over or became very unsightly. At that point, I'd use the new inlay pieces and fix it myself, or bring it to a trusted tech if you prefer.

Gotta say thanks again to JimmyR. I emailed Gretsch, got put through to Fender Aus and now they're arranging to get the replacement inlays sent over so they can get it fixed. Will probably take a while given the state the world's in but it's good to know that Fender'll stand by their instruments.

Ha! That's great! I bet that annoys the mob at Fender Australia! So pleased it worked out for you. I think you're right when you say it might take a while though. The mail from the US is taking an eternity at the moment. Completely understandable but frustrating too. I ordered some PCBs from the States almost 3 months ago and they still haven't arrived, and they normally turn up in 2 weeks.

That's great. I would be extremely surprised if a company did not stand behind a guitar like this. These top of the line instruments are the final line of defence for their reputation. I'm sure when you pull that out of the case EVERYONE swarms to see it. "Yeah that inlay cracked and FMIC Australia didn't even try to help me get it fixed" is not a good look. I'm surprised they did that to you last time you had an issue (if I understand your original post). Glad you're getting the issue resolved, that's a sweet F'n guitar man.

So it took a while before I could get the guitar picked up; but I got it back today; they even set up the guitar and gave it a nice clean.

I have to say I'm very pleased with the result; you'll notice the repair if you really look for it; but it was probably either that or get a whole new neck. 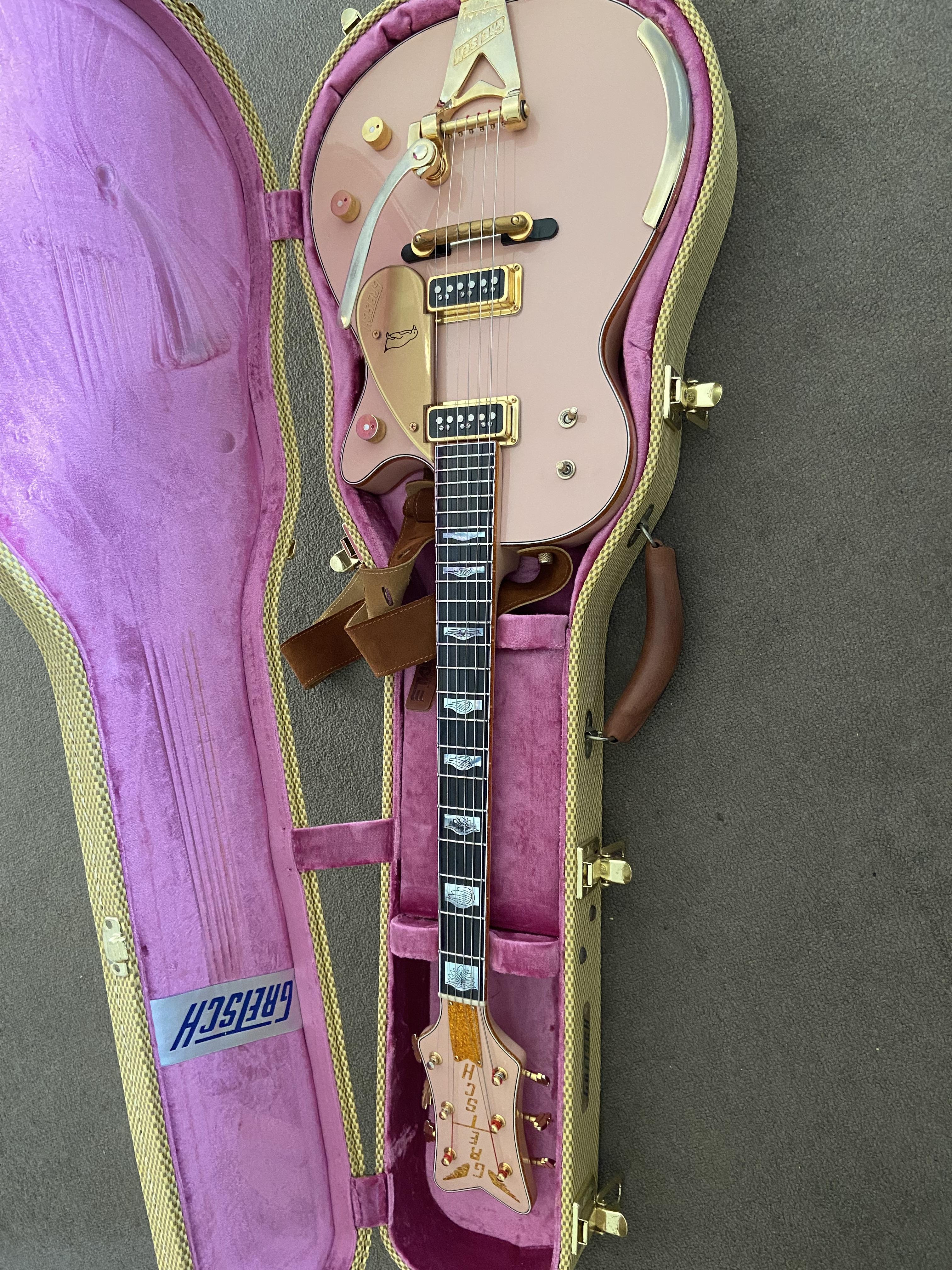 Woof! She's a looker. Bet she's a sweet player too.

When I ordered it I just gave some vague instructions "Make it as chambered as you think is reasonable and make the neck fatter than normal, but stick with what you thinks workable" or something like that. The custom shop got what I was wanting spot on even though I wasn't very precise with what I asked for

From my experience of furniture restoration, this kind of cracking is caused by the wood behind the MOP expanding and contracting at a different rate to the MOP. Filling the crack with epoxy or superglue, nail polish or any hard setting substance should make the MOP solid so that when expansion/contraction of the wood next occurs the crack will simply move somewhere else. You need to use something that is flexible like wax or rubber based glue if you are desperate to fill the crack. Alternatively completely remove the MOP and refix it using flexible glue and with the crack healed up as best you can manage. A better idea may be to leave it, and accept it as part of the character of the guitar.
I would be interested to hear what you did, as this is an old post, and what resulted?