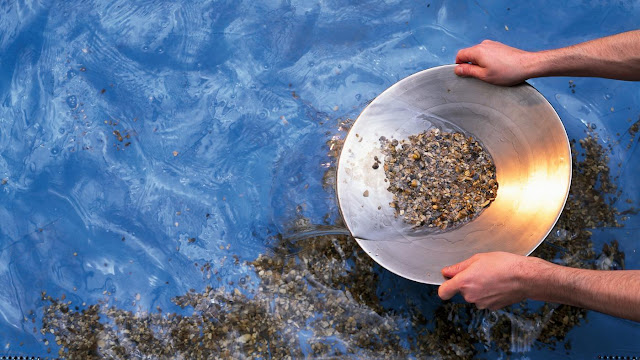 With the exclamation of the single word, "Eureka!", the gold rush was on in California and the history of our great state was transformed almost overnight. And, in the same manner, we have all let out a collective exclamation of "Eureka" as our own version of the California Gold Rush has gotten under way.

Most of us arrived in the mid to late afternoon yesterday. Camp Lodestar is set amid a lovely forest of pines and oaks with comfortable accommodations for all. The first couple of hours were spent renewing old friendships and then schlepping the gear into the main dining hall, where most Roundup activities will occur. By the time that we had the PA set up, pedal boards were in place, and everyone had pulled out their guitars and put them on display, it was time for a great pasta dinner.

And speaking of guitars on display, what an oppulent display of guitar beauty was there to be seen. As members of the GDP, we are so fortunate to have able to acquire such incredible instruments. The walls of the dining hall are lined with everyone's guitars, most of which (as one might expect at a Gretsch event) are Gretsch guitars. There is an occasional Tele or Strat (and even a Jaguar) to be found, but mostly you see 6120s, Country Clubs, Jets, a Power Tenny, and even a couple of Falcons. Every guitar is nicer than the last with some just about making your eyes fall out of your head. I would be hard pressed to identify another guitar manufacturer whose products are so elegant in some instances, and over the top sumptuous in other cases, as we have with Gretsch guitars.

One guitar deserves special mention. Rhythmisking, who resides in San Francisco and who brought his young adult son, Henry, along with him, packed along a great guitar. It is a vintage Supro guitar from the early Sixties. It has a bit of an art deco vibe to it and Rhythmisking tells me that it has wonderful tone. I think that he is going to have to plug it in and give us a demonstration.

After dinner, we started to get serious with some music making. And our guest who traveled the longest distance to get here was the first to kick things off. We are so happy to have Lee Erickson at our Roundup this year. He fits right in with this crazy Gretsch bunch very well and he was the first out of his after-dinner chair to start things off with a blues tune. The great thing about blues songs, in a setting like this where people don't know each other musically very well, is that they provide a common denominator and an easy way to get people up playing. They also lend themselves well to passing solos around between the various players. After a while, we jumped into vocal songs and the harmonies began to flow.

Special kudos to our main Gretsch man, Joe Carducci, who was willing to get on the drum set and hold down the rhythm section for us. For some reason, we didn't have a drummer last night (more on that in a moment) and Joe was willing to fill the void for us. Talk about a trooper!

Another highlight was that Powdog, whose amp building efforts we have followed here on the GDP as he built some great looking Gretsch-style amplifiers, brought along a number of his amplifiers to allow us to play through them. The response thus far has been overwhelmingly enthusiastic. Powdog tells me that the majority of the amps are built off the same Supro schematic, but that he tweaked some differences into them either in the tubes or in the speakers.

The music continued on for hours more, although I noticed that every time I turned around, someone appeared to have headed off to bed. The accommodations here are apparently up to the snuff as everyone seems to have slept well and was sufficiently warm. Showers have hot water (do you really need much more than that for a good shower?) and all of the other amenities are as advertised and comfortable. The dining hall is air conditioned (although there hasn't really been oppressive temperatures yet), so most activities occur there.

As the crowd thinned out and Joe C. went to bed, we were without a drummer. At that point, Powdog admitted that he had been sandbagging (my word, not his) and that he was, in fact, a former gigging drummer. I think that, never having been to a Roundup before, he was waiting on the sidelines to see how things would progress before sticking his toe in the water. However, he has been informed that no more such sandbagging will be allowed and that he is now one of the Roundup's official drummers!

Some names of other attendees who will be familiar to most: DrGretsch, Parabar, LA_Manny and his lovely bride Myra, Joe "afm_380" Rust and his son, Scott, Tom "Powertronman" Moore (who brought a bandmate, Mark Youngs, that has been invaluable in playing bass), my pal from my little mountain town, Johnnie "Uncle Twang" and his wife, Druann. Today, we are expecting a couple more arrivals -- Taffy and Mel Waldorf.

Morning arrived early for some and breakfast was on at 8:30 a.m. After a couple of brief announcements, the music was up and running once again. As I sit in my room, I can hear Parabar leading the group both vocally and through his keyboard playing. It is always nice to have a band glue guy like him at Roundup events.

So, day 2 is well under way from California's Motherlode region and hopefully more will be posted periodically throughout the day (although posting can get in the way of other fun things at a Roundup!). We wish you were all here with us.

(Once we get the photo posting issue here on the GDP sorted out, perhaps some of us can start posting up some photos of the event).

Well I left late, got here late last night, got up late, just going for breakfast late so I'll be there a little late this morning haha

Here is where a few might seek to beat the afternoon heat at Camp Lodestar.

CarolCat and I are really missing all of you! Play some surf music for me!

Surf music has already been played, FritzTheCat. But, there is always room for more, I'm sure.

You two are missed. Next year, no one is allowed to get married on Roundup weekend!

We are wishing you were here too, Don!

Seeing as how Taffy (Paul) is going to be 'fashionably' late, don't let him off the stage till he's played everything he knows!!

Yeah, I wish I was there, too.

Sounds great and I bet you'll all be saying it was over too quick....but at least then you might get time to post more pics and maybe some video? Would love to see powdogs amps in action

Yes, it was over way too quickly...

One of the happy WINNERS from the "Drop-Your-Pick-In-The-Soundhole" game...

I hope lots more photos get posted! I'm so bummed to have missed this Roundup. Sometimes life just gets in the way. I'm sure lots of great music happened and good times were had.

Generous donation! Congrats to the winner.

And look at Frank back there just grinning like, well, you know ....

I don't have many photos but I believe that others do. Unfortunately, you can't upload photos to the site at the moment.

What a great time at the Roundup! As always, it's a pleasure to catch up with old friends and make new ones. I enjoy nerding out on all of the great Gretsch gear - it's like being a kid in a candy shop checking out all the Clubs, 6120s, Jets, etc. I try to spend as much time as possible watching other players - there's a whole mess of talent and I hope eventually some soaks in by proximity.

For facebook types, here's a video of me branding my G5210: Branding!

I did my best to photo-bomb that shot. Just because the amp is going to live at my house doesn't mean it's mine. It's still under discussion.

Much as I would have liked to win the 2655T Streamliner, I had a blast being in the "house band" during the raffle with Johnnie, Mark, and Ethan, getting to add punchlines to the straight lines Ric12String kept unintentionally serving up, and making up event-specific lyrics on the spot. There's no shtick like Roundup shtick.

Sadly, for a good chunk of the festivities, we had to do without the presence of our fearless leader, Ric12String, who was unavoidably detained by that 4-letter word, "work." This concerned Proteus so much that he sent a drone to surveil our behavior. But luckily, one of us shot it down and we were able to recover this photo from it:

OK, I'm just kidding about the drone thing, that was taken from the deck outside the dining hall, here's a closer-up version:

There are lots more pictures, but they're in my wife's phone and I fell asleep last night before I could copy them and it's gonna have to wait until tonight.

I second what Frank and Mel said. Bob has done a fantastic job reinvigorating the get together in a perfect setting. I don't know how he finds the time for it, but I'm sure glad he does! I invited the guitarist in my rock band to attend this year. Mark Youngs fit right in! He played bass the whole time and won a guitar on his first visit. I have a perfect track record now. I got my high school buddy Paul going a couple of years ago. (Rhythmisking) Paul wins a guitar every year. He even won a ukulele too this year! That's two for two. I can't wait to invite my bass player and lead vocalist next year. The whole band will have new guitars if the trend holds...

BTW, if anyone is having trouble posting pictures because of the issue with uploading them to the GDP, you're welcome to host them on my site and link to or embed them. Just PM me and I'll set it up. Or you can Dropbox the pictures to me and I'll upload them for you.

Here's a shot of Mel branding his 'test mule' guitar!