Have chance of buying g226t STREAMLINER but don't want bigsby. Can I remove?? Just the arm...Is this sacrilidge?

It swings back, out of the way.

I guessed that but really.. I D like it out of the way... Is it poss without removing whole system?

If you only want to remove the arm and not the entire unit, why would you want to take off just the arm? And yes, around here it can be thought of by some as sacrilege, given that folks are more likely to add a Bigsby to a vintage Gretsch such as an Annie, than remove one.

And as NJ points out, unless it's a vintage fixed arm - valuable and somewhat rare - it rotates out of your way, which you need to do anyway to close the case lid.

Yes, loosen the strings (The hardest part of taking the arm off is explaining what all the parts are called) Basically all you need to do is remove the nut that holds the arm on and then ensure the large spring is seated properly then re-tune. But as Bob says it's just as easy to let the arm stay on and move it out of play or learn to love the Bigsby like a lot of us do. We are the folks to help.

The arm acts like a stop. Without it, the bar that the strings attach to is free to move side to side, not good. You would be better off removing the Bigsby and putting on a regular tailpiece. Many people here should have one or two extras laying around.

Thanks I'll just swing around then

Thanks I'll just swing around then & possibly take off. Now I know how thanks

Remove the handle from the arm, as in Mr Stubbs illustration, and remove the big spring too. The bar will stay put, it’ll bottom out on the pocket. Then string it up and you’ll be just as stable as a stop tail piece. And easily returned to full Bigsby later, when you regain your senses!

Print out Mr Tubbs pic, and put everything, including the pic, into a ziplock baggy . File it in s safe place. 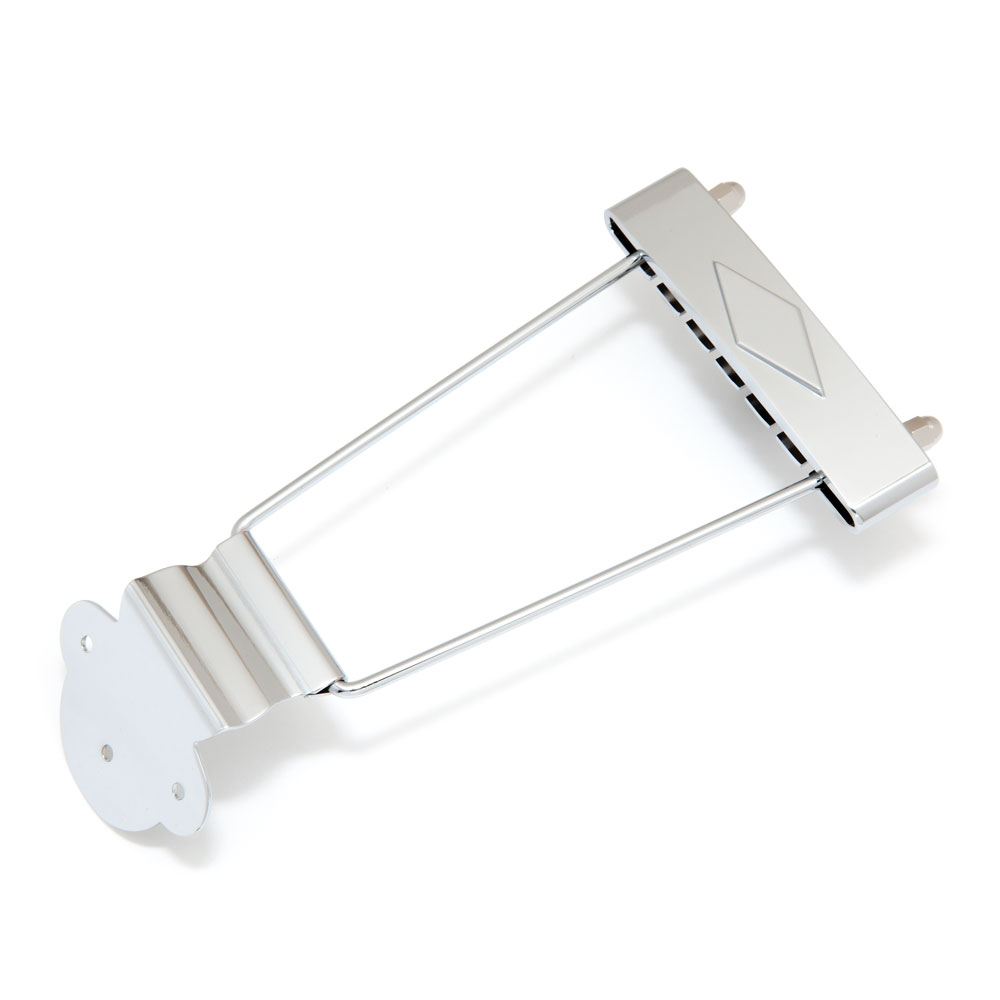 not that i condone the removal of any bigsby... ever!! haha

The second pic has always looked like a cheap POS to me. Something I'd expect to see on an old Harmony, Kay or Silvertone department store [excuse for a] guitar. They never came on a decent Gretsch guitar.

It ain’t a Gretsch without a Bigsby, well unless its a Cadillac tailpiece, but that’s another discussion.

Swing it the other way around. Done.

"The arm acts like a stop. Without it, the bar that the strings attach to is free to move side to side..."

That's only true of the fixed-arm Bigsby.

Feel free to remove the arm or swap out for a stop tailpiece.

There's nothing holy about a Streamliner which makes its Bigsby sacrosanct. (Or any other Gretsch, for that matter, provided the swap can be done without permanent visible violence to the guitar.)

If you like the guitar sans Bigsby, you can probably sell the Bigs for twice or more what you pay for the stop tailpiece.

The second pic has always looked like a cheap POS to me. Something I'd expect to see on an old Harmony, Kay or Silvertone department store [excuse for a] guitar. They never came on a decent Gretsch guitar.

Geez Dave, POS? That might be a little hard on a design Gibson and Epiphone (and many other makes) have used for decades. It works well and, in its minimalist design, has the inherent elegance of form which follows function...

I personally love the look of the Bigsby on any guitar. I do have to admit that maybe Gretsch carries it off better than most other models. That being said, if I were to have a problem with the only the arm, I would take a second look at the diagram above.

Well to me Tim, it's minimalist design looks cheap as hell. As in how to make a tailpiece with the least amount of material which equals little class or elegance. As you know, I'm also not into the bling of the Falcons but really, this look is no look at all. Just because early Gibson, Epiphone et al used this design doesn't make it classy to me. It looks cheap on those guitars too.

Of the fixed tailpieces, I like the chromatic/harp, G-cutout and Cadillac G. Sorry to fans of these, this one looks to me as if it should be on the cheapest guitar they make.

When opting for the lovely G-cutout, make sure you choose the right length for your guitar as there's a short and a long version.

When opting for the lovely G-cutout, make sure you choose the right length for your guitar as there's a short and a long version.