I've decided to bring my '99 Silverjet back to life. It needs a new output jack so I ordered one, now waiting for it to arrive. The guitar was very dirty, it was my favourite for a couple of years of gigging but never got to clean it. I took the strings off to clean the crud of the fretboard, man that was pretty gross. One thing leads to another and I figured it would be a good idea to do some fret levelling. I also noticed the nut which apears to be cut with a triangular file without rounding off the bottom where the strings sit. I'm gonna try to improve that or make a new bone nut.

Now I need to adjust the trussrod but I don't have a fitting hex key, at least can't seem to find one. I'll need to order online since I'm living in metric-system land. 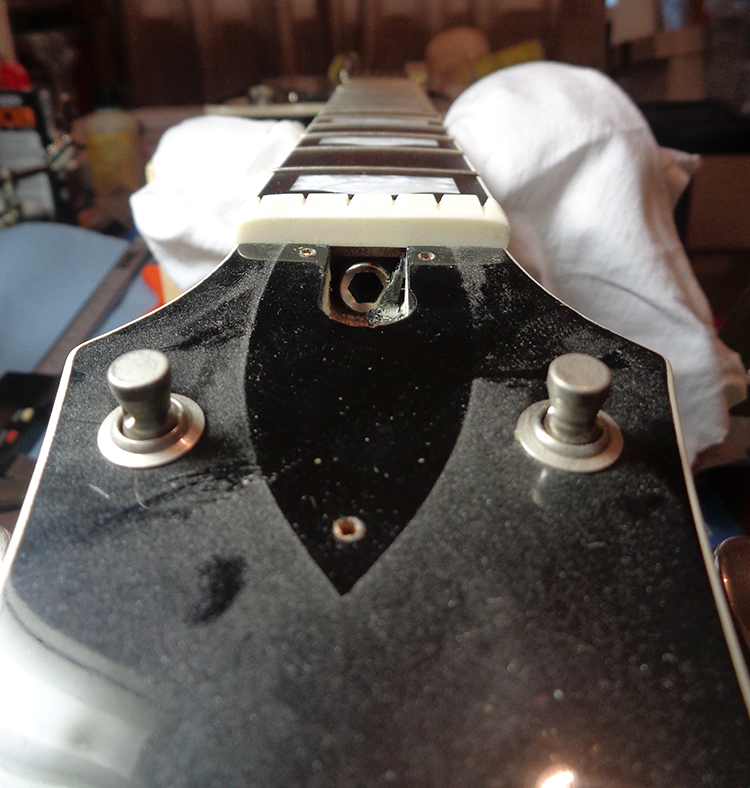 Hi Mike. I wonder you don't find the right one since I thought Japan has the metric system too. Don't you have a 6120-60? Is it pre-FMIC? What trussrod key does that need?

Hey Sascha, thanks I didn't think of that. Though I went through all my guitar cases and tool drawers and all I could find were different kind of trussrod keys. 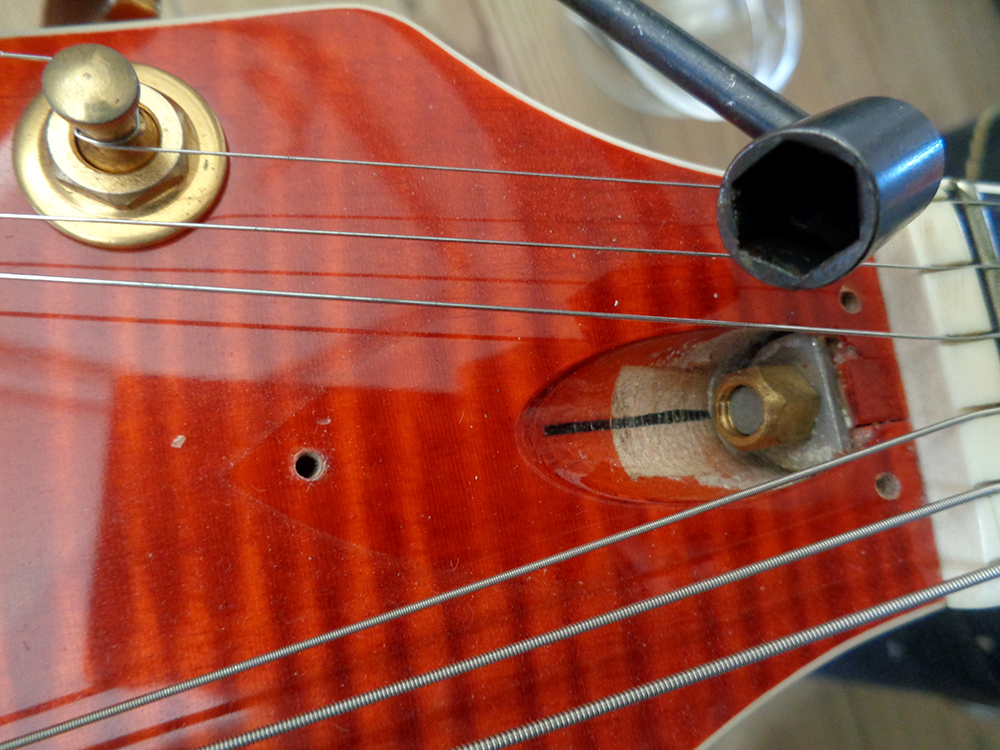 I did find one loose hex key which seemed it might fit, but I had too cut a piece off to get it in the trussrod. This one is 5mm and it wiggles so it needs to be a bit bigger than that.

That's weird. I just measured the key I use for my Fenders (incl. a MIJ) and it's 5mm.

Strange! I think I need either a 5,5mm maybe even 6mm OR 7/32inch. Difficult to tell, there's not enough room for any of my measuring devices.

Typical, the one guitar I have my mind set on fixing up is different than the rest.

You'll end up making one that fits perfectly (from a larger key probably) anyway as I know you.

You'll end up making one that fits perfectly (from a larger key probably) anyway as I know you.

Haha, I should have read that before I drove off to the hardware store... That indeed sounds like something I would do. Oh well, I found some hex keys in the local hardware store which should fit. Although I'll have to cut a piece off to get it into the trussrod cavity. 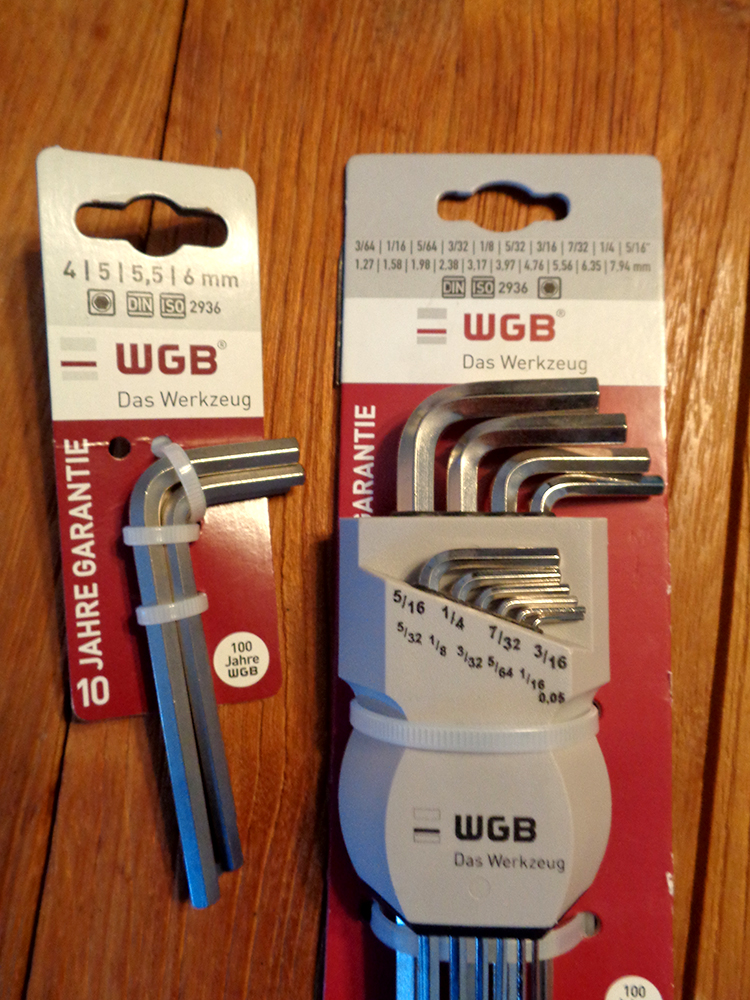 One of these will have to work, if not I'll take the files out!

Okay... That didn't work... I tried the 5,5mm key and it was too big which automatically means that the 7/32inch (5.5563mm) would also not fit. So I took out my needle files and and made the 5,5mm a bit smaller. Which now is very close to 5mm, that figures. So the trussrod is probably a 5mm. My original 5mm hex key measures 4,95mm which make it a very loose fit in the rod. Lost an entire day with these shenanigans. Oh well, my modded key is a tighter fit and now I'm able to adjust the trussrod. On with the project! 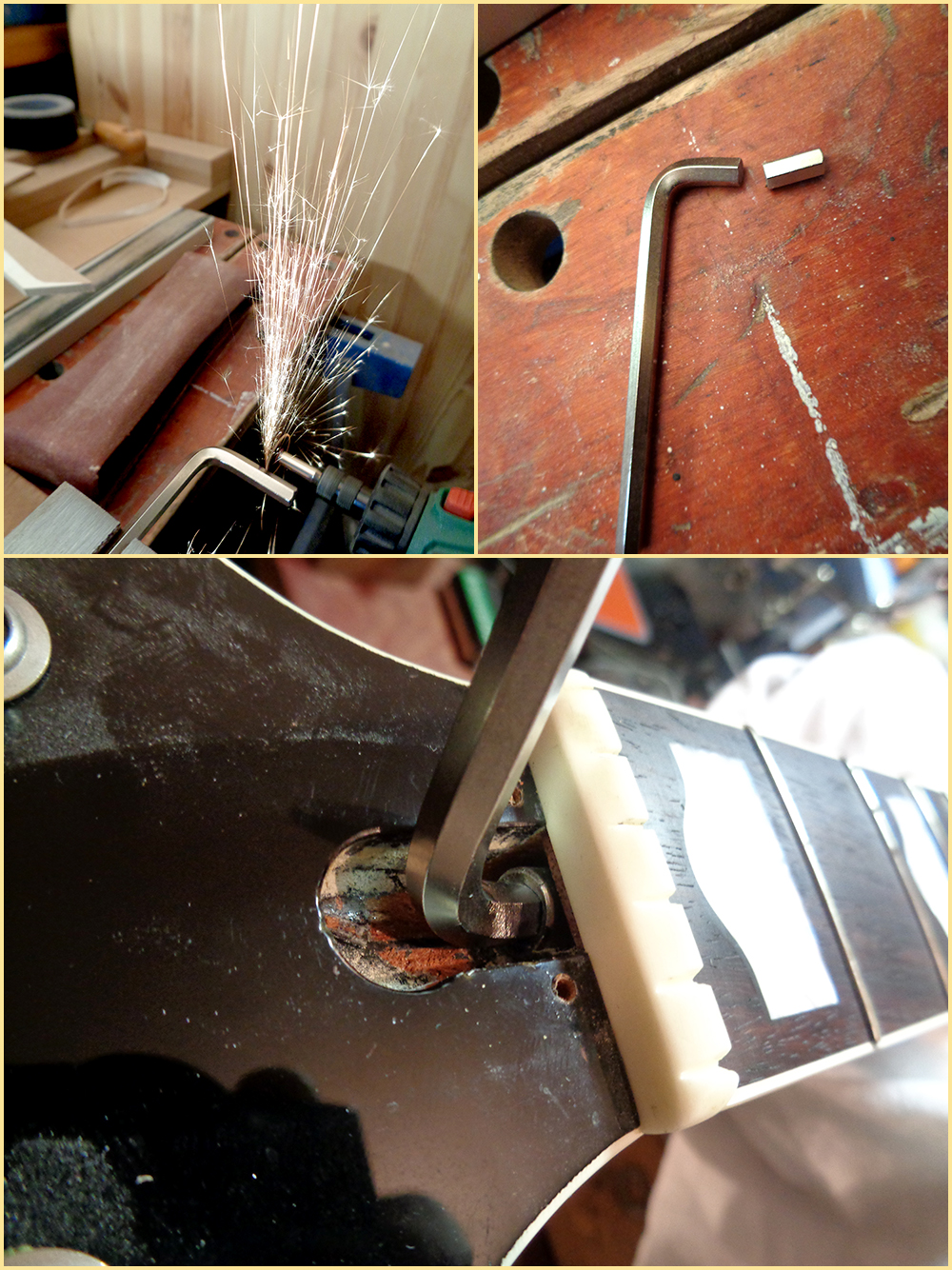 I might as well post pictures of the entire project here so I added - The Resurrection - to the thread title. My modded trussrod key works like a charm and after getting the neck straight I started to level, crown and polish the frets. Since I played this guitar a lot there were some divots in the frets that needed to be taken care of: 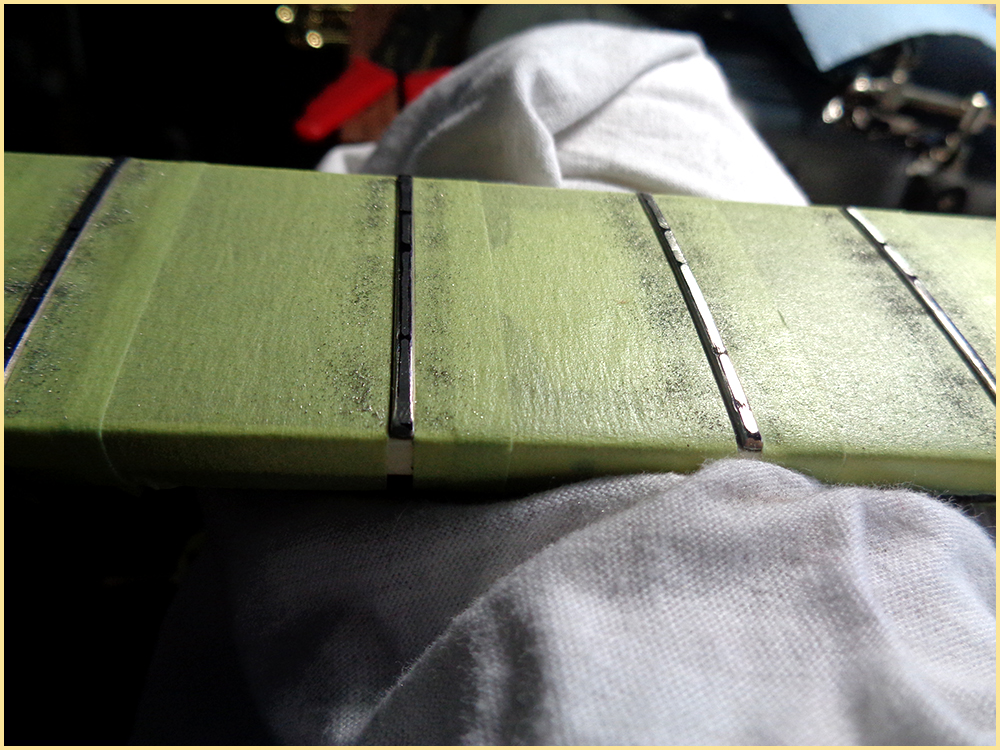 And right before polishing: 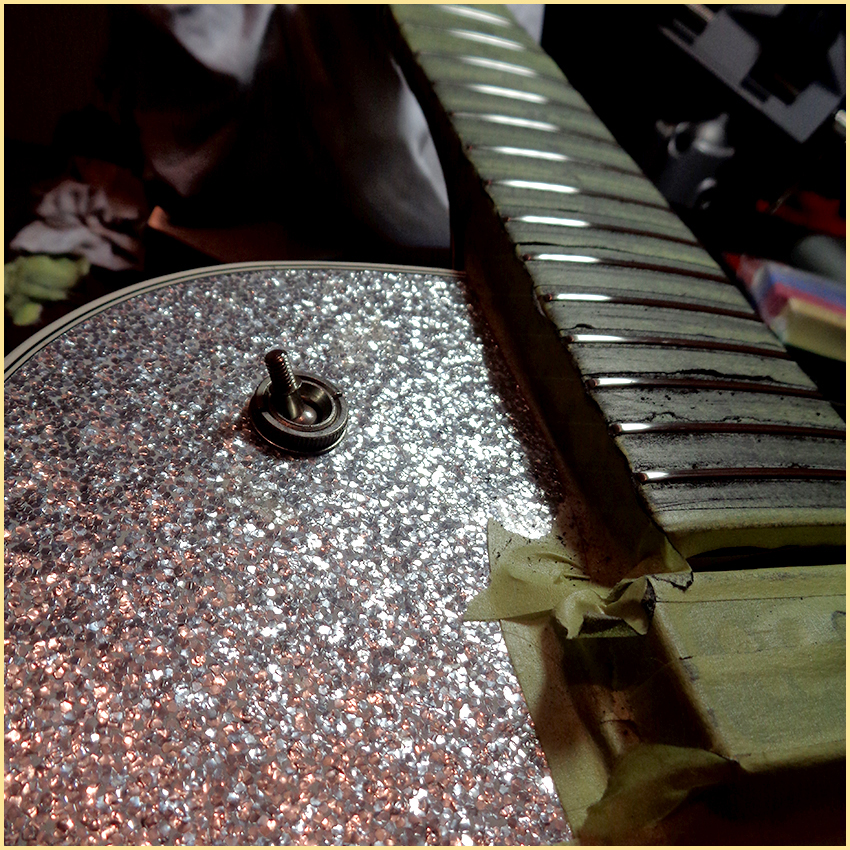 Sore fingers but well worth it! 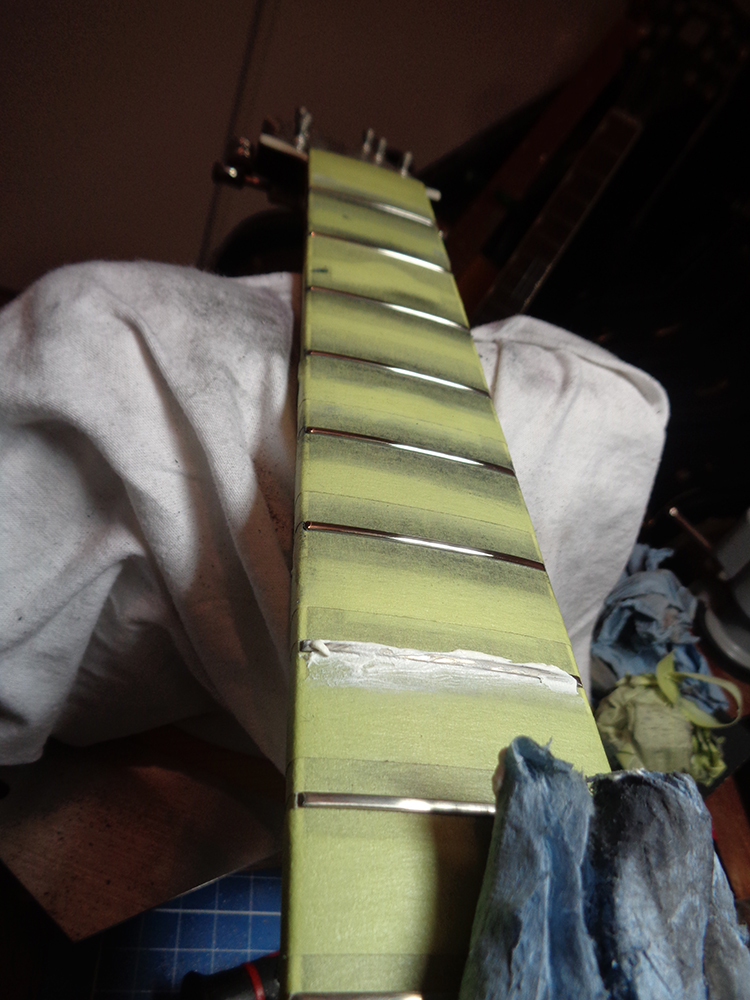 Starting to look good! Especially since this is my third attempt ever at a fretjob. I learned a lot on my two former projects and felt confident enough to start working on my Gretsch guitars.

Nice job. Thanks for sharing.

I've been playing the guitar for 50+ years, and I'm still nervous about doing anything more to frets than polishing them. My hats off to you, Mike, for having the courage to work on your own frets. Thank you for sharing your project and experience with us.

Many years ago I decided to level frets on one of my guitars. I still have it somewhere. :)

Great to follow both your projects and the progression of your skills.

Thanks guys! I've always been somewhat affraid to work on my guitars apart from small adjustments and 'mods'. Over the years I acquired quite some guitars, and I found it too expensive (though it's well worth it) to bring them to a professional luthier for setups and keeping them in working order. I played all my guitars until they started to wear, then I played my 'in better condition' guitars. I always had it in my mind to learn how to do guitar work myself, and now, not playing in a band anymore, I can find the time to learn this as wel as getting into guitar building. Youtube is a big help and I've got some books about the subject.

At the moment I can't seem to get my pictures uploaded to Imgur, so I'll try again later.

Told you it was gross... 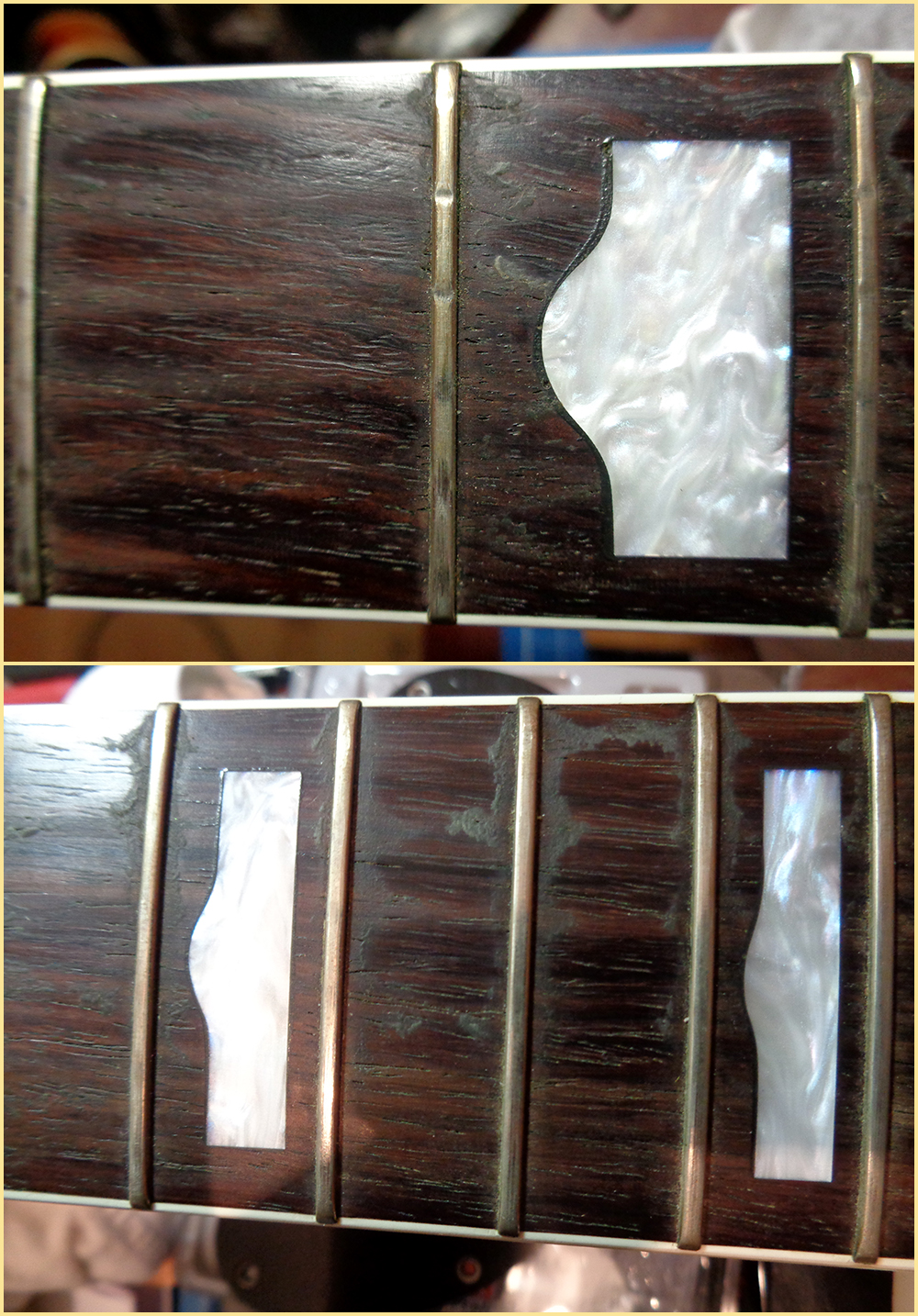 I Cleaned the fretboard before the fret leveling 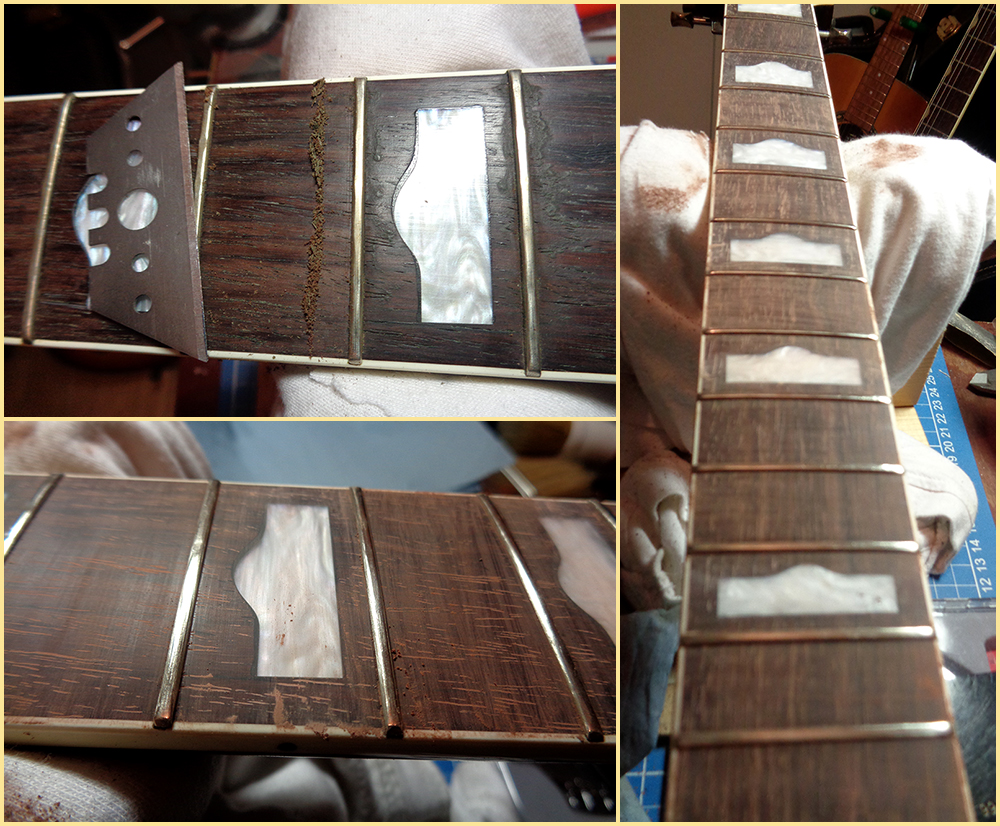 Scraping and a little sanding, it's cleaning up very nice!

Any idea how thick the inlays typically are on a Gretsch?

Since this is the first time for a redux, not an issue at all. My old Epi has been refretted enough times that any future work will require new inlays...they are like wafers.

I've only done my own fret work on my little Martin, used the Stew Mac "Eraser" kit...came out great.

I don't know how thick the inlays are. The sanding I did was starting with 800 grit to 1000 to 1200, so there's not really a lot of material coming off. I guess when it's time to refret then there will be more sanding involved with a radius block etc. Doing inlays is also something I want to learn, so I'll do that in time on a from scratch self built guitar (a project I'm starting at the moment).

I used sandpapers and one eraser on the frets, and the eraser worked great so next time I'll probably use more of them.

After the cleanup I conditioned the fretboard. 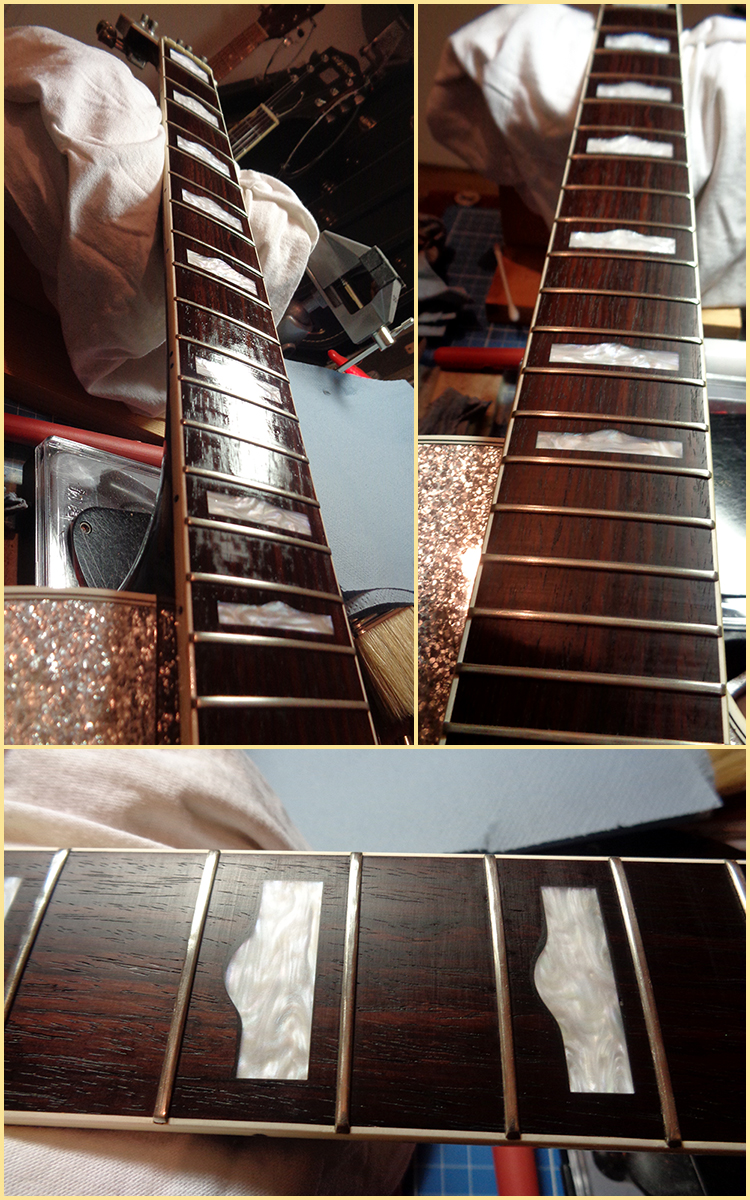 I'm happy how this is turning out so far!

Just tape everything off well, find your nice consistent stroke, and keep count!

You'll figure which grit is removing material at the preferred rate based on the amount of your fret wear, then just do all the frets the same, going finer grit until satisfied.

I'd use them just before the polishing stage. Taping everything of is importantant, also the pickups. You don't want any metal particles being caught by those magnets and ruining the pups. I might try thicker or sturdier tape the next time, the eraser made a hole very quick so I had to replace the tape. Probably because it was new with sharp corners.

Now, the main reason why the guitar hasn't been used for years... The output jack is broken, the slightest movement of the guitar would cause a lot of loud KRRRRZZZPP. I ordered a new output from Stewmac and connected it to the guitar. My soldering skills need to get better/cleaner but for now it works. My first time to do this to a guitar so I made sure to protect the finish with a piece of cereal box cardboard. 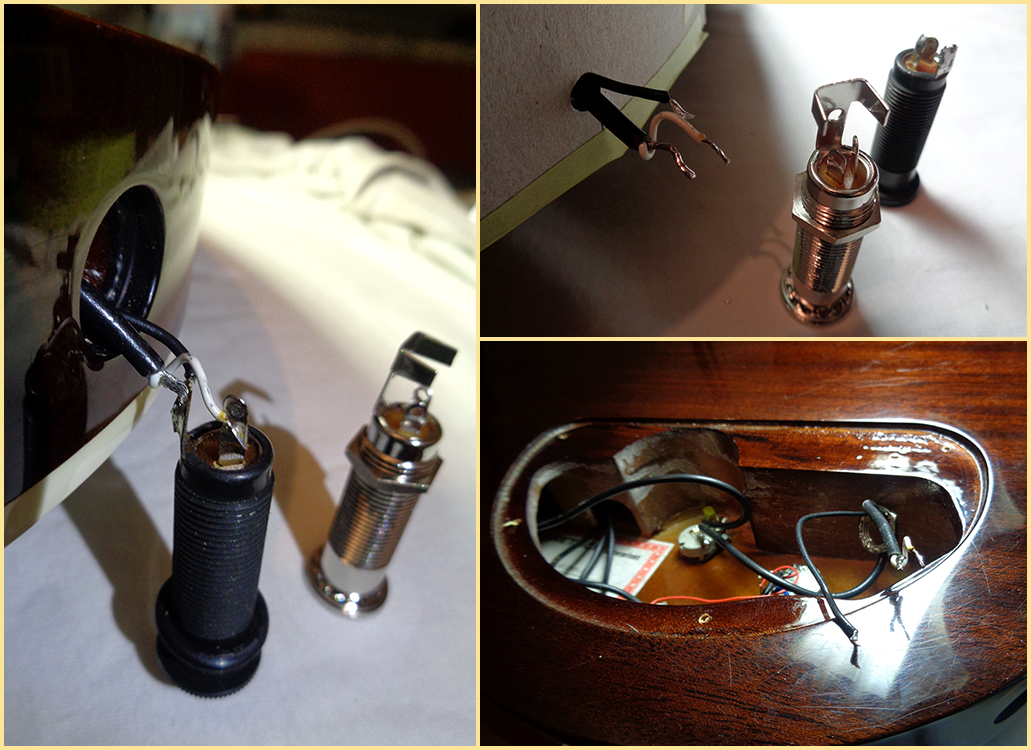 Out wit he old, in with the new! 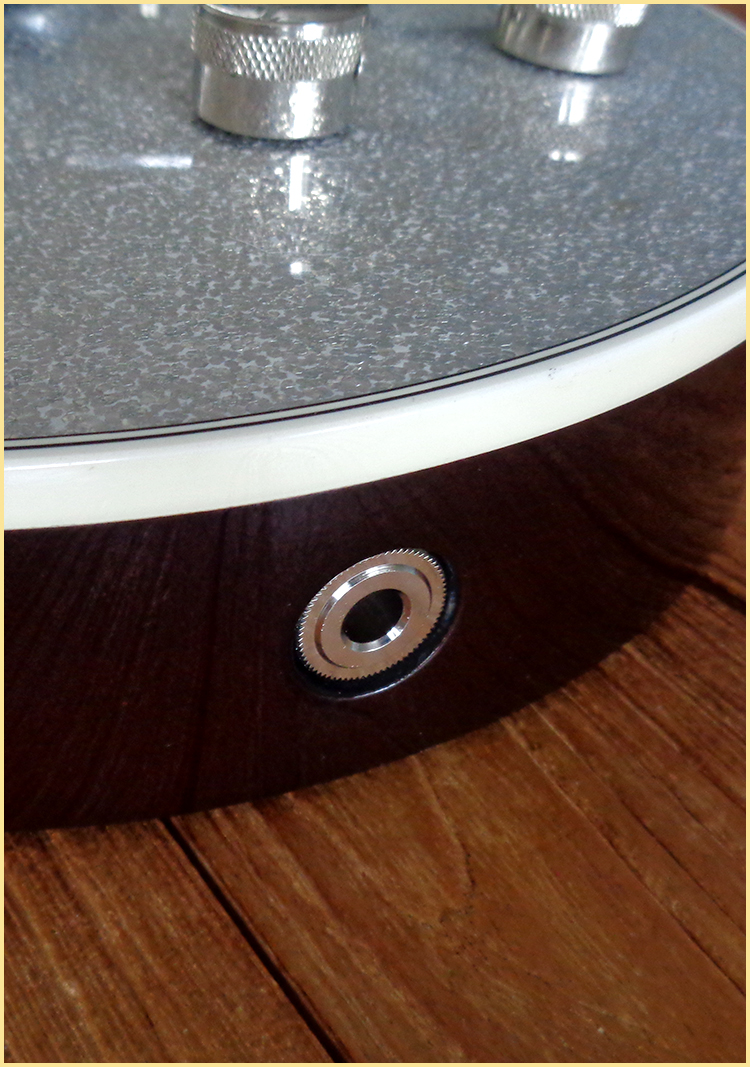 It feels great to finally play and hear this guitar again. But it still needs some work so on with the next step in this project!

When working on the frets I accidentally bumped out the nut. I barely touched it with the sanding beam but it fell right off. The original nut wasn't cut neatly so I had to work on it anyway. As it came out I might as well put in a bone nut so I ordered a bone nut blank. While waiting for that to come in the mail I started on the pickguard.

I really like the look of a black pickguard in stead of the original silver one. I had a piece of plexiglas which I've saved for many years, I always knew I wanted to make a custom guard for one guitar or another. I didn't copy the original guard but tried to design a more vintage shape. By examining many pictures on the net I came up with this, slightly different and slightly bigger then my original one. 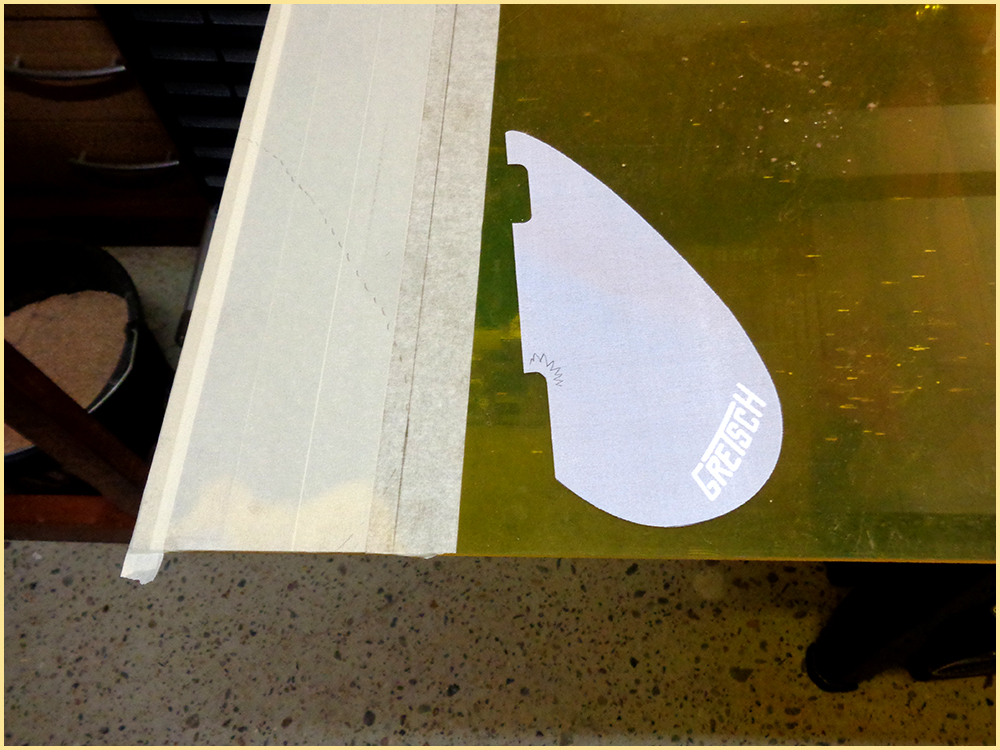 Once cut and fitted I stuck on some black vinyl sticker on the back. Ofcourse I wanted it to have a more vintage design Gretsch logo on it in white lettering... About 45 minutes of handcutting the logo and it was done. 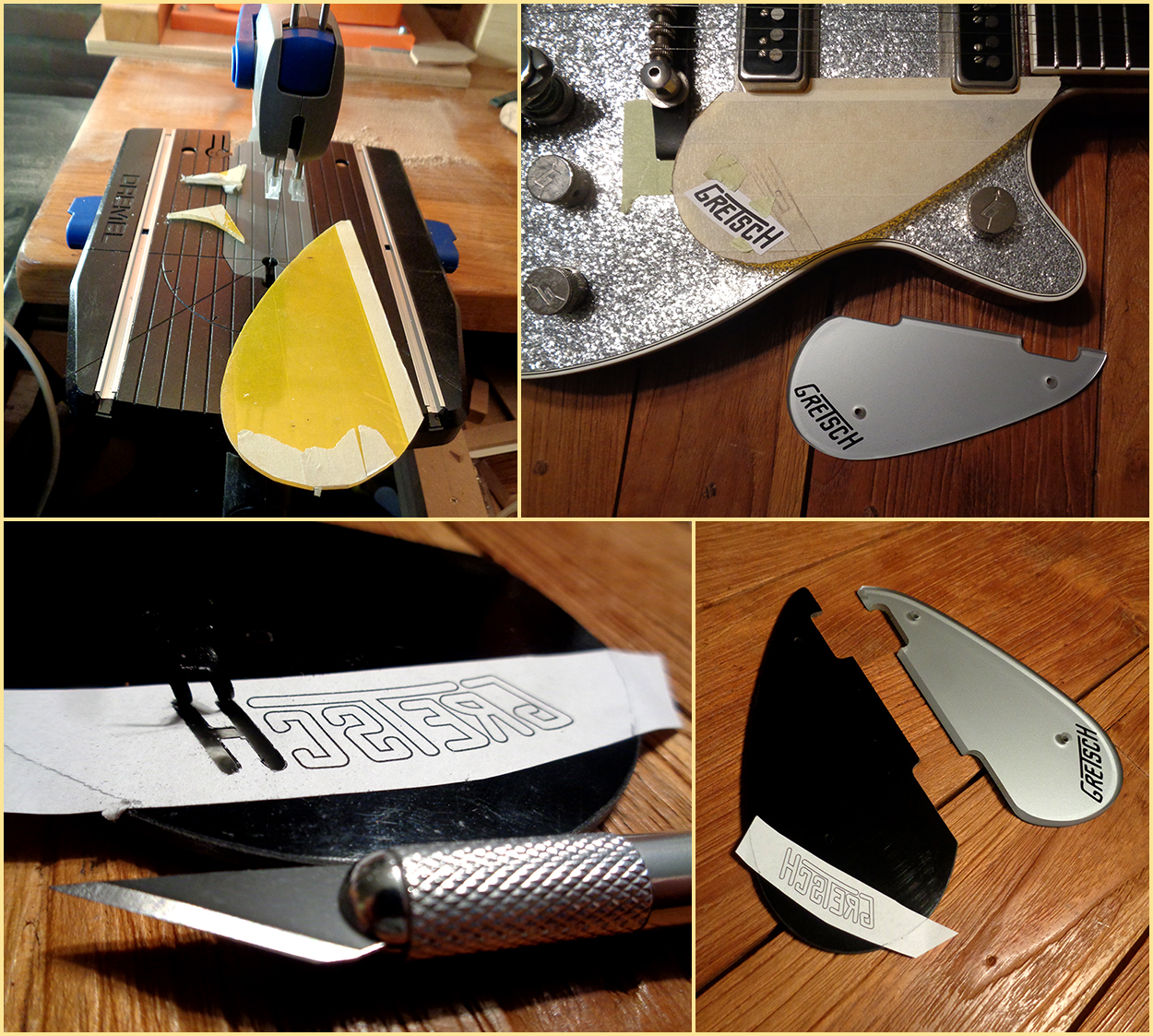 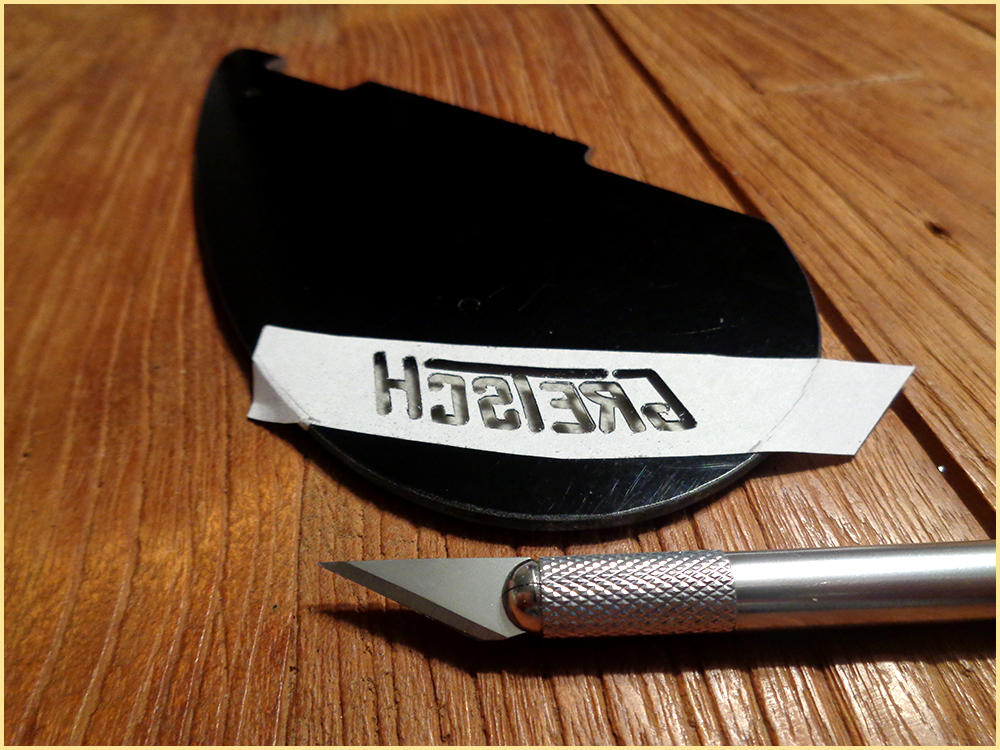 To make the letters white I stuck some painterstape to the back. 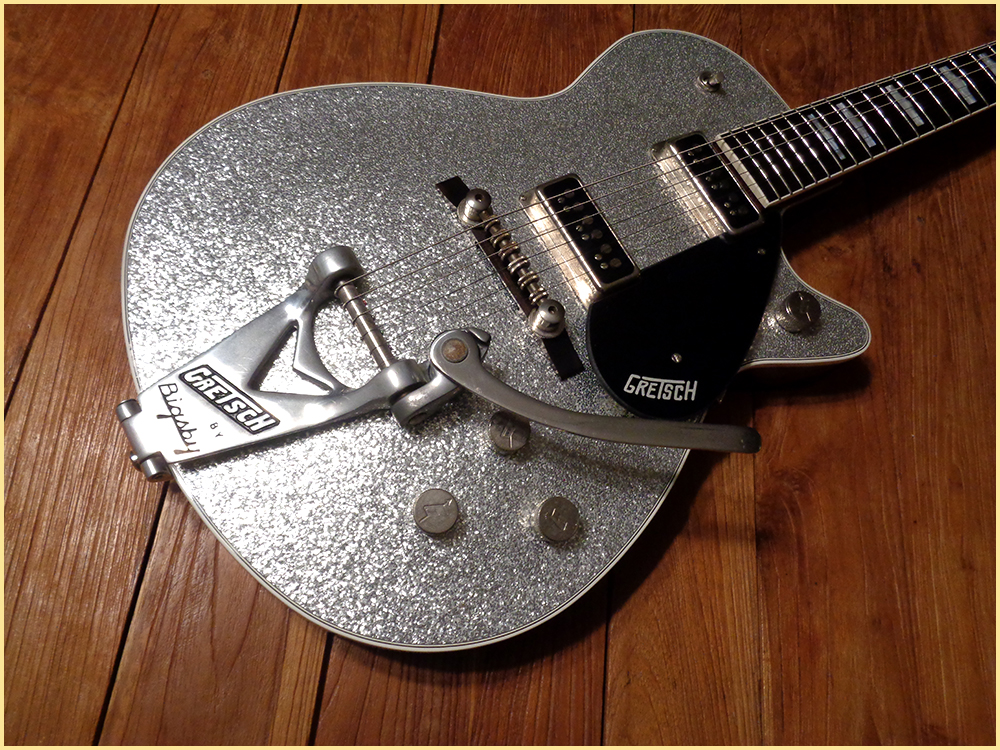 It looks great from a small distance, up close there are some air bubbles visible under the vinyl.

You should be happy with all this effort...every guitar eventually needs a good once-over.

Yes I'm totally happy with it, and have enough guitars that need some work lined up. It takes time to learn the skills needed to do this, but it'll save me money for not having to bring it to a professional (though would be money well spend).

Next step, cleaning out the nutslot. Going slow and keeping everything straight, trying not to cut into the wood. 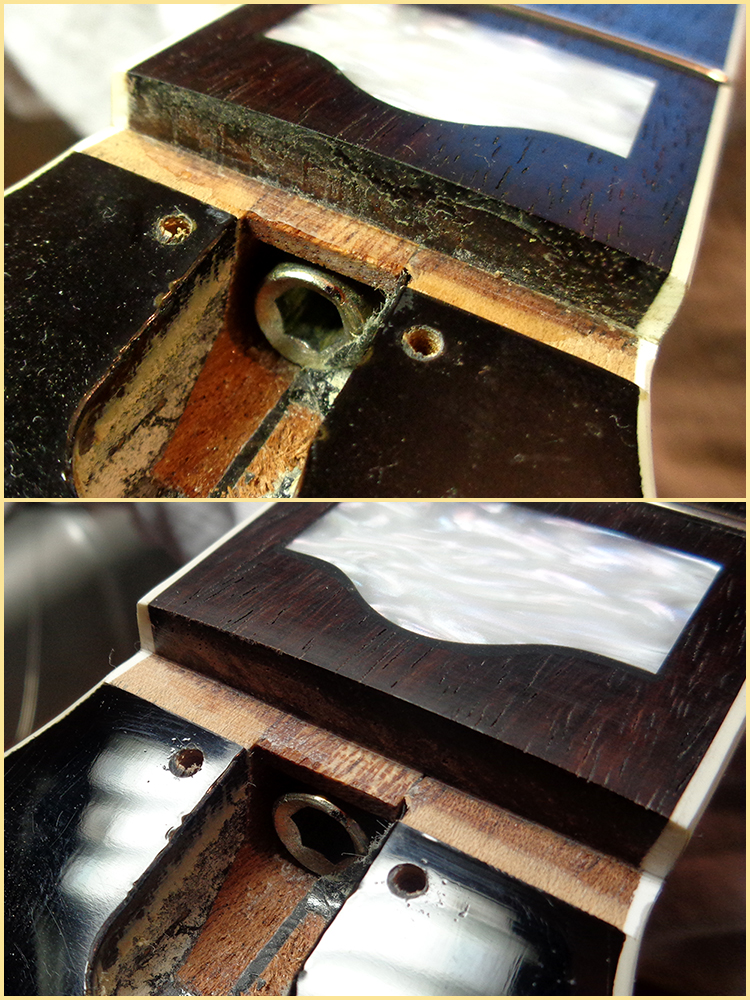 As I said earlier the original nut popped out. Also it isn't cut very neatly even though when I bought the guitar I took it to a luthier to give it the works. It cost a bundle and the guitar played very well when I got it back. But now looking at the nut I think it can be done better. The nutslots were cut into a V-shape so the wound strings had some room under them, not sitting flat on the bottom. I'll try do do a better job seating the strings. 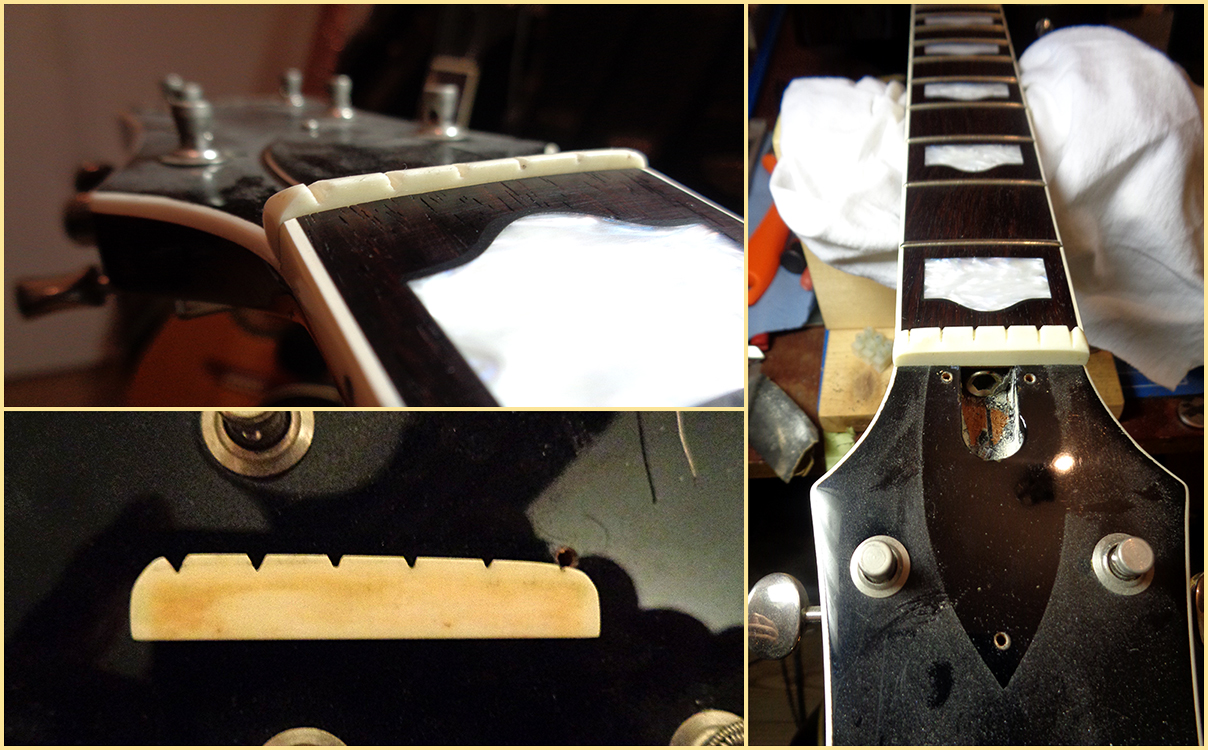 It might be worth a look into the GraphTech pre-Slotted nuts.

Makes for easy fitting as one only needs to correct L, W, and H. And for most makes of guitar, that is very minimal effort.

I've always been taught that slots should be U or Square in shape. Still trying to understand the V that came back from your Luthier.

I'm pleasantly surprised by the thickness of the fingerboard.