Lore has it that jazz great Johnny Smith used to remove the pole pieces from his floating mini humbucker to improve clarity.

I like my HSFs but find them a tad woofy on the low strings. Thinking of removing a pole piece or three per pickup to see if I can get more snap, less woof.

Has anyone tried or heard of this?

As always, all comments, thoughts, ideas welcomed and appreciated ...

on pickups that use screw polepieces with bar magnets beneath the bobbin,(like most humbuckers and mini hums) removing screw can help balance volume across strings...

with dynasonics..the polepiece is the actual magnet...removing one would be far more dramatic!!! i don't quite get that?? only thing dyna has going for it is that it has elaborate elevator spring system...which contributes to magnetic output

overall, you'd probably be better off just getting a weaker magnet pup..like an alnico III or alnico II

Toxo experimented with this exercise - various combinations - so hopefully he'll chime in and add some perspective.

Bahaha I believe Mr Zoom is 'taking the piss'

I don't know about removing all the pole pieces. I find that having a floater pickup (with adjustable screw poles of course) on am acoustic guitar with acoustic strings requires (at least in my instance) one to remove the B string pole to achieve a balance between the wound and unwound strings.

I think lowering your pickup gives you a more open less aggressive sound which is likely what removing pole pieces would do too.

I've only tried removing pole pieces entirely on humbucker pickups and it was removing one set (one coil) of polepieces which thinned out the sound alot making the pickup sound a little more like a single coil. It's a reasonably common modification. I generally find humbuckers too thick and muddy sounding for my taste.

Give it a try, best way to find out and easy to do.

OK, I removed one line of pole pieces from under the E/A/D strings on each pickup (6 pole pieces in all). This resulted in a volume discrepancy (of course), requiring some small adjustments to pickup heights. After several iterations I found the sweet spot yielding a pretty well balanced sound in all 3 pickup selector switch positions with better snap from the low strings while retaining the complex jangle of the higher pitched strings. Overall, I am quite pleased with the result, although this early success won’t stop me from tweaking further (already thinking about putting the D string poles back to accommodate the occasional melody note played on that string LOL).

tox-"Bahaha I believe Mr Zoom is 'taking the piss'"

that was my initial thought as well..but u never know with bz!!! haha

My Deluxe Chet's pickups. I did this because I like Hilotrons...which puts me firmly in the minority. I like the filtertrons this way. 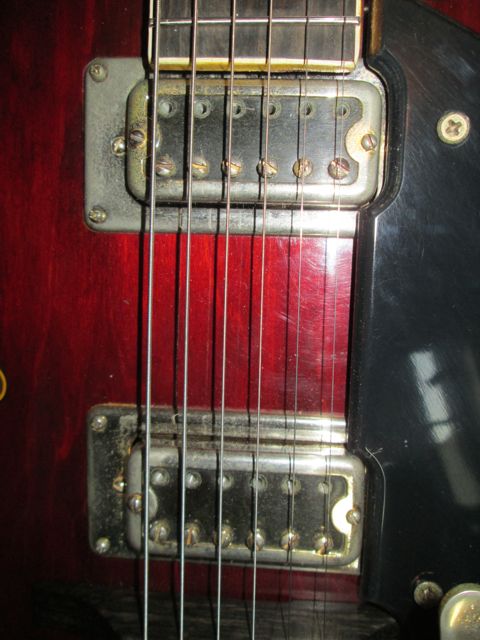 I have experimented with doing something similar (but less drastic!) to what Jazzhands has done with his Filter'trons. I love my twang, especially on the bridge pickup, so have sometimes lowered the bass string polepieces on one side and raised them on the other. The effect is subtle but discernible - you can slightly improve bass string clarity by doing this.

I leave the treble string pole pieces at equal heights because they sound great like that anyway. With my current set-up I have all of the polepieces at the same height as their partners, but do have the bass string pairs higher than the plains. The D, for example, needs to be higher than the G if you want to hear similar output (with a plain G).

tox-"Bahaha I believe Mr Zoom is 'taking the piss'"

that was my initial thought as well..but u never know with bz!!! haha

ok...wasn't thinking all...but dearmond was known to remove a magnet or so...haha