Before purchasing my 2018 G6118T-135 today, I read a lot about the pinned bridges on the Gretsch guitars. When I hear (and read) pin bridges, I think of exactly that, pinned and no movement. What I read on many forums is the same thing, the hex screws fit into a dimple in the bridge to prevent movement and that intonation should be spot on from the factory.

Well when I got my guitar the intonation was off on the 3 high strings. I looked at the bridge and noticed it was parallel to the bridge pickup which looked weird. I thought, maybe the bridge slipped off the pin so I loosened the strings and tried to move the bridge. Well, each side of the bridge had fore/aft travel to certain points. This caused me to take the bridge off the guitar for a look see.

Well there are two hex screws in the body protruding about 1/8". But the underside of the bridge there are 2 elongated slots the pins ride in. This sure is not looking like what I read about how the bridges are pinned on Gretsch guitars. So my question is, since Gretsch started pinning the bridges, has the bridge always had slots to allow movement or is this something new for 2018?

Kind of sounds like a good idea if it is a new thing! I have a 2017 53 jet with the pinned bridge, and there is a slight amount of wiggle room when you loosen the strings, but the holes in the base are round and it still fits on there pretty snugly.

It's by design, and I think it's been that way since Gretsch began pinning them. The idea is that you can fine tune for different string gauges, but not knock the thing completely out of position.

It's a great idea. I didn't know this is how Gretsch is pinning their bridges. Whether the bridge is pinned or not becomes a non issue.

They didn't always have slots:

I had my luthier pin the bridge on my '72 Super Chet & my '98 Gibson Country Gent. She put the small threaded screw into the top and a small circular hole in the underside of the base feet. Nice and snug.

Another advantage of pinning the bridge is to make allowance for the fact that a significant number of bases do not fit the contour of the top properly, accounting for the tendency to 'skate' on the top. Pinning anchors the base/bridge in place relieving you of having to sand down the base to fit flush with the top. It also allows the base to sit properly if it moves during string changes.

ALL my bridges are dead parallel with the bridge pup, which to me is as it should be, as long as the bridge is a bar which doesn't have individual string adjustment for intonation. Both my guitars have AOM's which function just fine.

I am putting a new set of strings on tomorrow and I will take a pic of the bottom of the base and post it.

I've never seen a Gretsch base with a slot - and I buy them by the dozen. (Though not, of course, the ones Terada uses at the factory. Rather, I get Gretsch stock items - which I would presume - but can't prove - are the same bases Terada uses.)

This could well be a new design that just hasn't made its way into open stock (though I've received bases since January for which I had to wait, suggesting FMIC was out of stock and got new inventory).

Or it could be something that was done on a particular guitar when the divots on the bottom of a bridge base weren't in the right place to provide correct intonation on the locating Allen screws - which may have been drilled in the "wrong" location here.

There may or may not be much difference, but I doubt that having two pins into the top makes up for a poor fit otherwise. For best transmission of string energy to the top, it's still best that the underside of the bridge base be (however laboriously) closely fitted to the guitar top.

ALL my bridges are dead parallel with the bridge pup, which to me is as it should be...

"as it should be" as in I like symmetry. If you have a bar bridge I can see the angling of it to give a degree of intonation. Either one of your serpentune bridges or an AOM with a decent saddle adjustment shouldn't need to be canted off on a tangent! My '41 Synchro has the Art Deco base that's lined up dead perpendicular with the guitar's length and the bridge has the saddles offset for the intonation and it's fine in that position.

I agree with you Tim regarding seating the bridge base - solid or with feet - properly on the top and I've done that with mine on the SC & Gibby Gent prior to pinning. As you pointed out, the sound won't transfer as efficiently without a completely solid contact.

Well, this is a first. I've voted down my own post. Don't listen to me, listen to Proteus. He knows WAY more about it than I do.

But that does leave the mystery of why it's slotted and how it got that way.

I know nuthink but what passes through my hands. It could well be a new spec; no one at FMIC or Terada confides their plans or protocols to me!

Just saying I haven’t seen slots in bare bases - but I haven’t been under the hood of any recent factory guitars.

One of the most predictable things we have going for us is our predictability.

I guess it is called semi pinned

I unpinned my Duo Jet's bridge base in order to use a vintage aluminum compensated bridge I had lying around. It had slightly wider string spacing, which I like, but the strings weren't centered.

To my surprise, the pins were about half an inch long!

Does the Gretsch melita bridge base fit onto the pins of the 53 VS jet?

Does the Gretsch melita bridge base fit onto the pins of the 53 VS jet?

Almost certainly not. I don't think the Melita base has divots, and if they did I doubt they'd be in the same place as on any other Gretsch base.

Pinning is used over screwing them down as the screwheads aren't visible and you can use small hex screws for the pins which create a smaller hole in the top.

Here is a 2018 pinned bridge (underside of base plate. notice the slots) 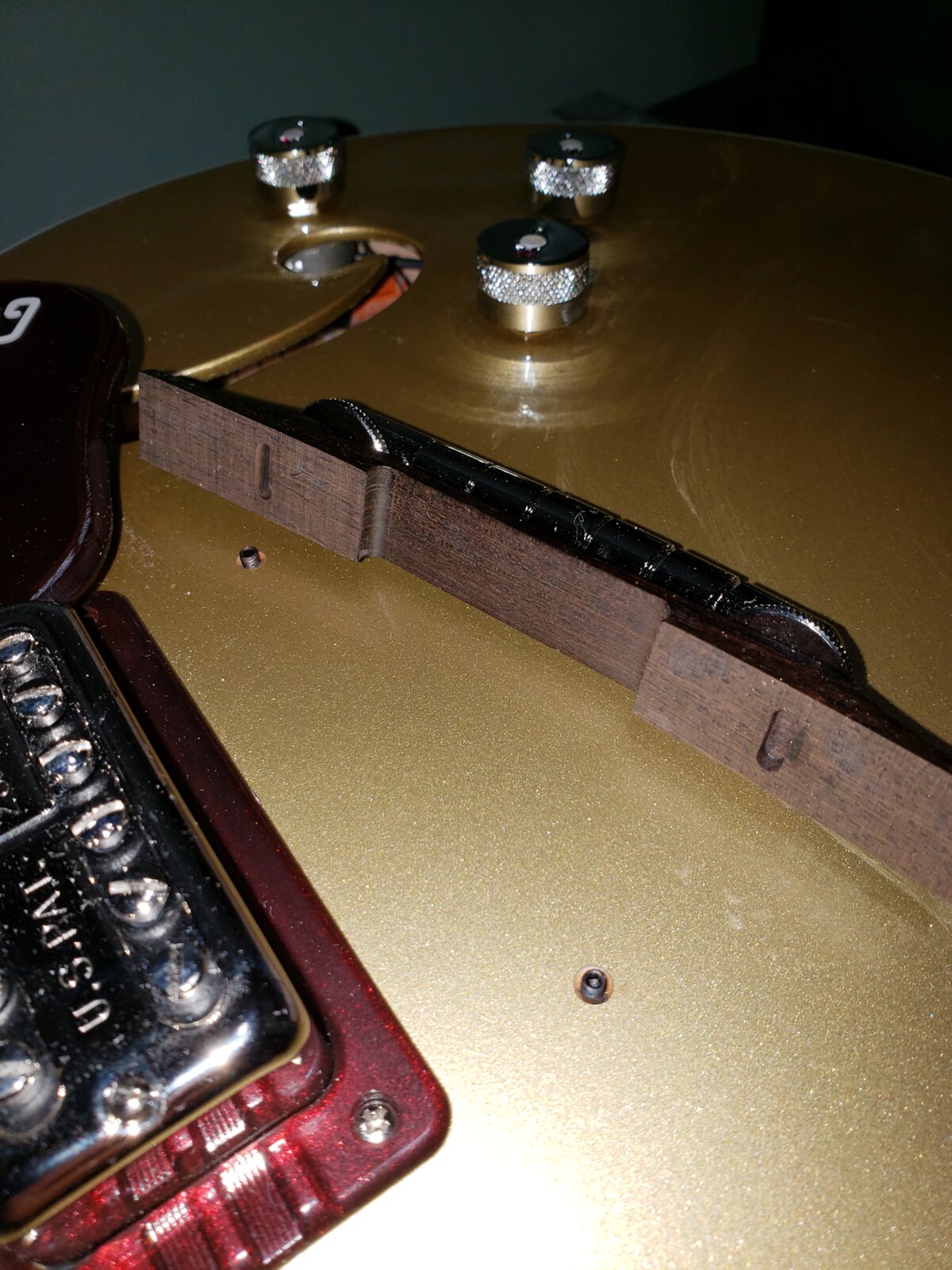 The strings are off right now as i intend to set up.

I can say the bridge on mine feels glued. No exaggeration. I couldnt wiggle it at all. I admit i did not force the issue until i asked around here.

Thats what brought me to this thread.

Should i use a little umph? Is that required? Even occasionally?

The bridge-mounting posts themselves are screwed through the base and into holes drilled in the top of the guitar.

You wanna take that sucker off, you gotta unscrew the posts. And they're long. But no "oomph" required.

All this means you aren't easily going to change the position of the bridge base - and its unique position is the reason I've had to develop an equally singular compensation profile for the Tru-Arc model that fits the 5420.

Most fun I ever had. (Not including root canals.)

The bridge-mounting posts themselves are screwed through the base and into holes drilled in the top of the guitar.

You wanna take that sucker off, you gotta unscrew the posts. And they're long. But no "oomph" required.

All this means you aren't easily going to change the position of the bridge base - and its unique position is the reason I've had to develop an equally singular compensation profile for the Tru-Arc model that fits the 5420.

Most fun I ever had. (Not including root canals.)

That kinda info is why i like it here and why you and i will end up doing business.

I just need to discern my preferred material. Brass or steel?......hmmm

Thanks Proteus it is good to be in the glow of such wisdom ( i mean that by the way,no sarcasm)

So to remove the bridge from the base?

I assume i run up the thumb wheels but i would rather learn the right way.