After about 15 years on this site, this will be my first post on this particular forum... so be gentle boys!

I'm aware that the modern Gibson lacquer has some plasticizers in it. So as I desire to coax a finish crazing/checking out of a reissue LP Special project guitar's finish, I'm curious what advice the craftsman on the site my have?

My original intent was to freeze the surface (canned air) and let nature take it's course as it thaws. But if it's not going to give me an authentic look, I may be stuck refinishing the guitar with pure nitro and going from there.

Any thoughts on this would be appreciated. Here's the desired affect I'd like to emulate.

I remember reading something about putting a newly sprayed solid guitar body into a refrigerator overnight for that effect but don't recall the details. Pretty sure it was someone here though.

Hi Ed, I can help you if it's nitro. But I have never done it to a guitar with a modern finish so I have no idea. But good luck!

Tonyb could likely tell you how to tackle this project.

Geoguy is right. Tonyb would be the man to give you advice. Hopefully he'll chime in.

Thanks guys... I may have to track down Tonyb for his advice on dealing with a modern Gibson finish. If the consensus is that I have to refinish then I'll be seeking your guidance Danman!

I have a Tonyb'd Blackguard Telecaster and it looks (and plays and sounds) fantastic.

THere's a stewmac tutorial where the fellow puts faux crazing onto a tele. The canned air trick (which I've used on modern nitro) produces a more super fine crackle grid-like crackle, looks okay but quite unlike what happens naturally. Lot's of people emulate the real type with an olfa blade type knife. You have to study some real examples first and then ideally some practice on a non guitar surface would probably be useful. I haven't tried that method but that's what many people that 'relic' do.

I used to try to induce my dates to check my lacquer, and usually just got slapped for the effort.

Ed, On Fenders, they usually freeze them and that gives you very fine checking often seen on Fenders.

But Gibsons have those long lines from side to side that curve and interact with one another. I know for a fact that the "pro" relic guys "draw" that on using an X-acto knife with very light pressure. I did it on a Les Paul once and it turned out really good. I printed out a hi-res photo of an old Paul to use a guide.

THere's a stewmac tutorial where the fellow puts faux crazing onto a tele. The canned air trick (which I've used on modern nitro) produces a more super fine crackle grid-like crackle, looks okay but quite unlike what happens naturally. Lot's of people emulate the real type with an olfa blade type knife. You have to study some real examples first and then ideally some practice on a non guitar surface would probably be useful. I haven't tried that method but that's what many people that 'relic' do.

I used the upside down spray can. The thing is that if you keep it too close you get the very fine crackle, which looks fake. You need to keep some distance and that way you can control it and it looks more natural.

You first have to make some damages in the lacquer. That way you get natural looking crazing leaving from those damages... I did that by throwing a bunch of keys at it. You can aim to focus on an area but still it's random. And that looks more natural than when people damage parts with a screwdriver or whatever. I think.
Then you use the upside down spray can and keep it at a distance (not close) and very slowly let things happen. You can see it happen and you go by feel.

I used the cutting technique using an X-acto knife before as well. That was to create the stress lines in the refinished area between the neck and the headstock of an old Annie. In the beginning they look created but after a while they continue and wear in and now they look very real.

Great discussion... so if I had the X-acto knife affect done then hit it with the canned-air (my source says about 4-6 feet away) would the "scribe" lines serve to manifest greater crazing? In other words, would additional crazing emanate from the scribed lines, or perhaps would those lines get more pronounced? Thanks for opinions!

Hey Josh.. that's pretty much exactly what I'm going for!

Hi Ed, the image you show also has damages aside from the checking. I would try to damage the lacquer a bit before trying the checking. Often the crazing lines start from a damage. And yes, doing some X-acto work first and then the spray can could definitely work. Like I said: Damaging the lacquer a bit with a handful of keys works surprisingly well.

Thank you Ed. Yes, if you combine all of the techniques described here, it should work out great!

Btw, here's the link to Tony's Goldtop makeover that started as a LP Studio! Lots of pics and info. http://gretschpages.com/for...

pic of the front 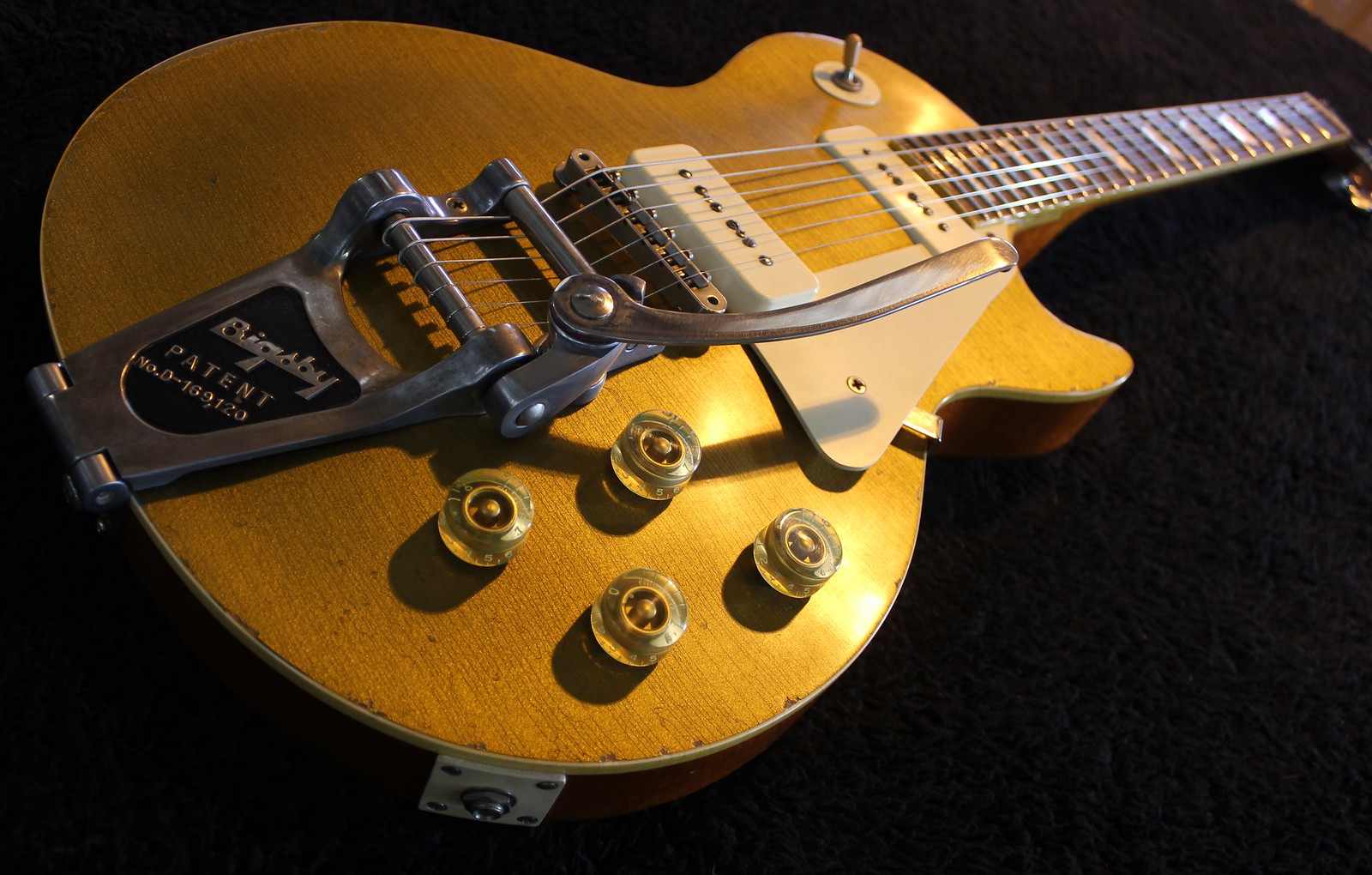 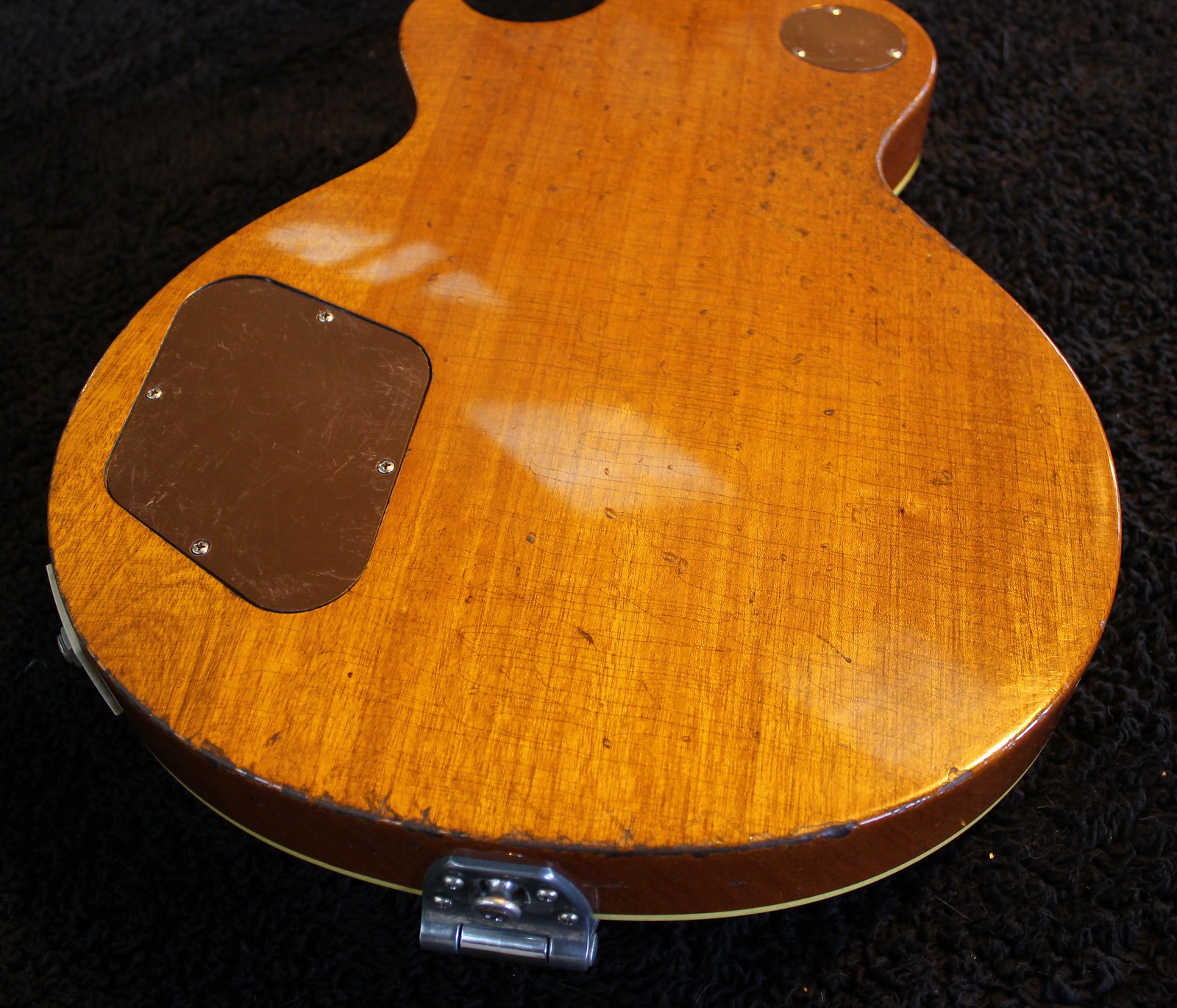 started out as this 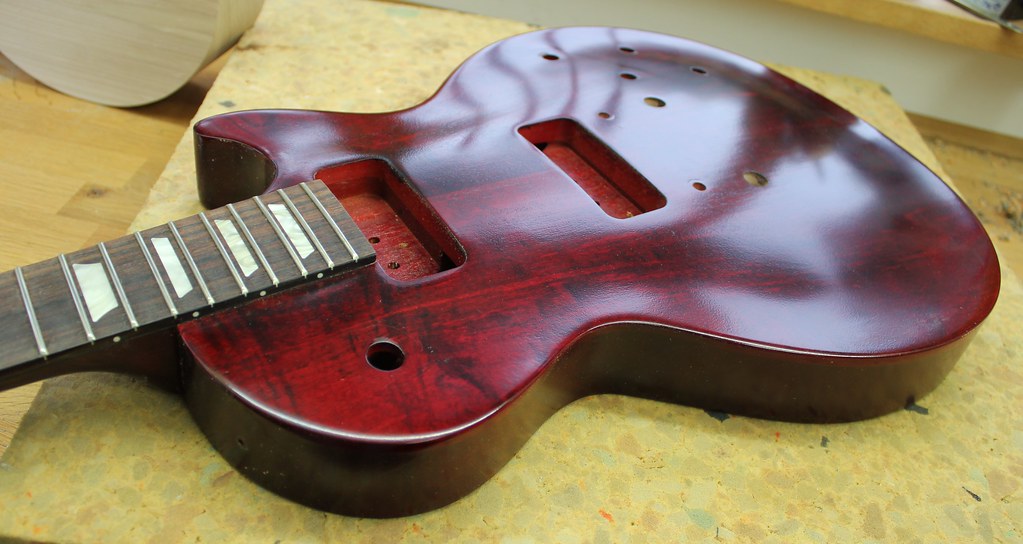 Crazing on my Tele that Tony refinished.

Btw, here's the link to Tony's Goldtop makeover that started as a LP Studio! Lots of pics and info. http://gretschpages.com/for...

pic of the front

started out as this

Wow... Tonyb's Goldtop project turned out amazingly well! It REALLY needs a vintage B7, but is otherwise fantastic! Thanks for posting the pix and link Sascha!

The key to Tonyb's results is the fact that he refinished the guitar (with pure nitro lacquer I imagine) prior to introducing the crazing/checking. That may be the direction I'm headed too... dunno yet.

I have some lacquer that doesn't have any plasticizer in it.

Hi Ed. What guitar are you doing? If it's a modern Gibson, yes, too much plasticiser to get it to check by freezing. Your options are; manual, with a scalpel (swivel knife is a good cheap investment) Or, strip down & refin with proper nitro. The good news is you can try it with scalpel/Xacto, if you don't like it, then take the second option. I've never liked the look of compressed air/plumbers freeze spray, too crazy paving & I doubt it would work on a modern Gibson finish anyway.

It's much easier if you have a nicely checked vintage guitar to copy. Failing that pull something from the web & blow it up to actual size. Have a practice on cheapo guitar first. I like to put a few dings on with a bunch of keys or similar, in areas of the guitar that would naturally get dinged. Then you can work from the dings, cracks usually form a little ring round the dings & radiate out from them. Work some gunk into the cracks then dull down with micromesh or fine steel wool. Then you can do some scrapes & stuff to expose some wood, then dirty up the wood accordingly. Finally wax & buff up. Hope this helps.

Thanks for jumping in tonyb! You've summarized my feelings, in that I might have someone take a run at the X-acto knife approach (using a photo of a gloriously checked example as a guide). If that doesn't work out I'd just have the guitar refinished with pure nitro lacquer and go from there. In either case, I'm not the person doing the work. I'm just not talented at this stuff. So I'll be looking around for someone to commission on this project. The guitar in question is a 2005 Gibson LP Special.

Just to further explain my plan for this LP project... those humbuckers are on their way out! Instead, I'm going to have these installed.