Thinking of putting a Bigsby (and T-Armonds) on my Cabronita Thinline....

[I have changed the title of the post, as I have decided to not mess with the Vibra-mate]

I know I'll need a B5. My concern is how to replace the American Std. hardtail bridge.... I've seen pics of Cabs with Bigsbys that have a hardtail 3-saddle tele bridge, but I prefer the look of the TOM... (which is how Bigsbys are installed on Les Pauls/SGs...) which brings me to my idea...

How difficult would it be to install 2 posts to put a Compton/Tru-Arc bridge on? I think that would be pretty badass.... 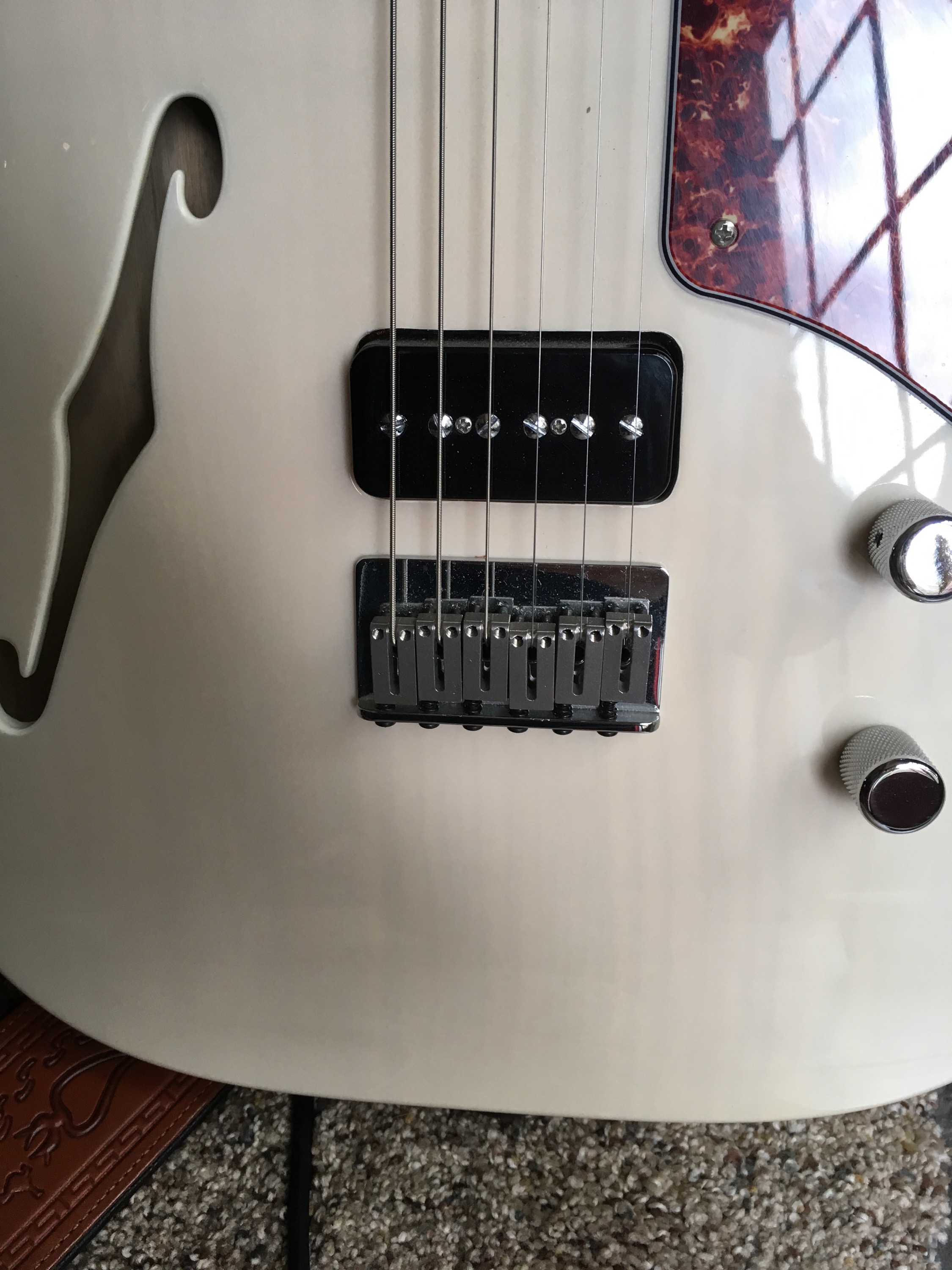 Well, holes are kinda hard to get id of if you change your mind?

Of course, I was just wondering if the Vibra-mate was a "better" idea for some reason, or if it's more trouble than it's worth... just want to make sure there aren't any weird issues with Vibra-Mate.

OK, some research says to use a TOM style bridge, I'd have to increase the neck angle. Not doing that, that would make it NOT a tele to me. So that's gone...

I guess the "kit" from Bigsby is really my only option... I'll just have to not use the pickup plate, and install the bridge to the body. Then, see where the old holes fall, and figure something out to keep them from being unsightly... maybe a little pickguard cover....

I'd change the bridge to something like this (a Callaham) and get a B5. I wouldn't bother with the kit.

Installing posts isn't hard - you're just drilling two holes. But you want to be sure to locate them exactly where they need to be for best intonation.

We (Tru-Arc) already make the "SerpenTele" for B16 installations. It's a SerpenTune in your choice of material and radius, but with hole spacing and diameter to go on the studs for the Bigsby Compensated bridge that comes with the B16 kit. It's been very well received by guys who have it.

I don't have a self-contained solution for the B5, which uses the same bridge configuration as a Jazzmaster or Jaguar. (IE, a bushing in the body which receives an internally threaded tube fastened to the underside of the bridge - which itself has a smaller screw threaded though its bottom with which you adjust height via holes in the top of the bridge.) So the only way to use a Tru-Arc with the B5 would be to have the mounting posts on studs in the top.

While we're here, a pretty thorough synopsis (from TDPRI, 11 years ago) of the difference between the B16 and the B5 on a Tele, from a poster named RomanS. (Everything from here on out is a direct quote.)

As somebody who has built Partscasters with B5 and B16 Bigsbies (check out my gallery pics, and look here: http://www.tdpri.com/forum/...), let me list you some pros and cons:

B16
Pro:
• softer action (feels more like the Bigsbies on archtop guitars)
• With the unavoidable sympathetic ringing of the strings behind the bridge, you'll get a bit of a Gretsch vibe/tone out of your Tele.
• easier for changing strings

Cons:
• B16 tremolos are EXTREMELY finicky when it comes to body specs - the body measurements have to be inside very small tolerances for the B16 to work correctly and cover the pickup route (and it doesn't mean a thing whether you have a "real" Fender body or not) - read a bit more here: http://www.tdpri.com/forum/...
• B16 is more expensive than B5; even more so, because you can get licensed versions of the B5 (Bigsby B50 & B500, Duesenberg Bigsby-clone, cheapo no-name clones), but not of the B16.
• With a B16 you have to shim the neck pocket a lot (at least 1/6" (4mm) at the back end of the neck pocket).
• Those sympathetic vibrations from the strings behind the bridge will drive you crazy when practicing without plugging into an amp.
• The stock "bowtie" aluminium bridge that the B16 comes with is compensated for string-sets with a wound G-string, not for modern unwound G-strings. I used a TOM-sized roller bridge (but using a TOM leads to a whole set of different problems, like the mounting studs having to fit inside the oal cut-out on the B16).

B5 (used with a vintage-style 3-saddle ashtray bridge with notches in the back lip, not with the Jazzmaster-type bridge form the Fender B5 set!)
Pros:
• less expensive
• no shimming of the neck necessary (if you are using the notched ashtray bridge)
• practically no change in tone/twang from a Bigsby-less Tele (again: if used with a notched ashtray bridge)
• no problems with body dimensions; very easy installation
• The pressure bar on the B5 dampens all sympathetic vibrations of strings behind the bar, so you won't hear annoying overtones when practicing unplugged.
• If you have an ahstray bridge with compensated saddles, you won't have intonation issues like you would with the bowtie bridge that comes with the B16 (I rcommend the non-slanted compensated saddles, as found on the Wilkinson bridge sold by www.guitarfetish.com - with slanted saddles, I'd fear that the strings move sideways when usin the Bigsby).

Cons:
• Vibrato action feels stiffer than a B16 or a Bigsby on an archtop guitar (but still way smoother than a Strat trem!)
• Changing strings is more difficult.

Overall, unless you already play an archtop with a Bigsby and absolutely have to have that soft, smooth action, or want to change your Tele twang to a slightly more Gretsch-like tone (softer attack, more complex mids & overtones, less direct punch), I'd say the B5 (with a notched ashtray bridge, NOT the Jazzmaster bridge from the set!) is the better option.

I'd change the bridge to something like this (a Callaham) and get a B5. I wouldn't bother with the kit.

For a stock cabronita, this is really the easiest, most stable, best looking and cleanest solution. Rutters will do a bridge like this too if you ask.

The Callaham bridge is the way to go, plus you get the benefit of notched, compensated saddles; spot-on intonation and the string spacing maintained during aggressive strumming. Adding the Bigsby did not make any discernable difference in sound to the pickups already in my home-built Tele. Mind you, I originally built the guitar as a top loader, with no provision for string-through. No shimming of the neck was required. Just line up everything and drill. The B5/B50 is a bit stiffer in action than a B6, but you get used to it. I did add a 1" Bigsby spring to position the arm where I prefer it, and also for ample clearance above the stacked potentiometers. Just make sure that if you go with a Callaham bridge, get the right one. They make one with 2-1/16" spacing and another with 2-1/8" spacing. It is a clean installation and at least will cover the footprint of your existing bridge.

I also went with an import B50, as opposed to a USA-made B5, only as the former is slightly shorter in length than the B5 and ensured no overhang at the lower bout (for my guitar, the B5 would have; YMMV).

Compared to the look of the stock bridge on the Tele - or the bridge on a B16 - the Callahan/Rutters flat plate just looks unfinished and ad hoc to me. (Not that it isn't perfectly functional.)

But then the JM-bridge look of the Bigsby B5 kit doesn't "look right" on a Tele either.

And to complicate matters, the whole rest of the B16 - all that Rube Bigsby hardware dominating the guitar from bridge pup to butt - doesn't appeal to me.

Still, when I play any Tele I miss the Bigsby. Gotta do something.

It's almost like Leo made his guitar as unfriendly to his dear rival's signature product as possible.

I like the Callahan bridge better than the other 3-saddle installs I've seen, which are the ashtray bridges that have been modified with "scoops" (you make them with dremel) for the strings to pass thru:

The reason I like the Callaham is that minimalist/unfinished/hot rod look, especially considering the busyness of the original, six-saddle top-loader bridge that was on it. Mind you, I built this one as an untraditional Tele. (I have traditional covered by a very traditional, 50s black guard reissue Tele actually built by Fender).

Someone over on GT said to use a Mustang bridge... I LIKE!

(disregard the pickup plate for my use):

You can get aftermarket ones in 9.5", that's what the poster over on GT did.

Actually, it might be a Jazzmaster/Jaguar bridge, which is the same thing as a Mustang bridge, but 9.5"

the bridges on the current American professional Jazzmasters/Jaguars have Mustang style saddles and are 9.5" radius, yes. But the prices I've seen for that as an aftermarket parts would almost get you the Callaham bridge, and that's a much easier/cleaner install you wouldn't have to drill your guitar for.

I just lopped off the tension bar.

How does THAT guitar sound? It's crazy clean. Classics? Or Classic and a Classic Plus?

Did you have to shim the neck on that??? Because the archtop-style bridge is so high?

the bridges on the current American professional Jazzmasters/Jaguars have Mustang style saddles and are 9.5" radius, yes. But the prices I've seen for that as an aftermarket parts would almost get you the Callaham bridge, and that's a much easier/cleaner install you wouldn't have to drill your guitar for.

I just like the cleaner look of the Jaguar bridge over the larger Callaham.... but I have some thinking to do, as it'll be one or the other....

Alot of it may depend on the open holes showing (not just the bridge mounting holes, but the 6 string-thru holes... but I was thinking a nice piece of matching pickguard to cover those maybe...)

Don't worry about those. They're for ventilation, to keep the guitar from catching fire when you're burnin' it up. People will believe it.

Also weight relief, to get exactly the right body weight for optimum this that and the other thing (insert guitar-speak terms).

It's an elegant solution when one feature serves two important purposes.

Since we're talking about screwing bridges right to the body (over in Proteus' thread), the TonePros ROLLER bridge looks like a cool Bigsby solution as well....

How does THAT guitar sound? It's crazy clean. Classics? Or Classic and a Classic Plus?

Classics. It sounded just ok. I never warmed up to it. I sold the Classics but haven’t yet decided on replacement pups. I should have put a switch and maybe a volume/tone setup rather than the two volume knobs.

Did you have to shim the neck on that??? Because the archtop-style bridge is so high?

The body was made for me by Jayce Mumford. He cut the neck pocket high so there was no need for a shim.

Callahan makes great parts, I've used them on other guitars.

I've done about 5 of these using graphite saddles and everyone tells me they're amazed how well they stay in tune. A guitar tech that was in charge of the guitar in the picture along with 10 others said he plays had this one ready because it was always in tune.

EDIT: I thought I saved his quote. The bass played player/tech Scott Schoenbeck said "I thought it was perfect...felt good stayed in tune great!! I always had it ready to go as a backup if he broke a string on one of his other guitars...I thought it was his best guitar".