For sale is my 1960 Fender Vibrasonic, a brownface era amp. I've enjoyed this beauty for some time and really don't mind hanging on to it for longer, but I need to pay down some gear debt. I currently have it up on my Reverb.com Surfysonic store listed at $3000 but with a 15% off price of $2550 + $200 shipping. The shipping estimate is an approximation - PM me with your location to try and get a more accurate estimate for both US and Int'l folks. Local pickup most welcome, too.

A few caps have been changed, see photos and there are photos of the transformer numbers. Overall a very clean example of the rare Brown Tolex Fender Vibrasonic. Sounds great!

Note about the tremolo - it takes a little time to warm up and I do not recommend it being in a room with humidifier as the humidfier can negate the tremolo. I've experienced this first hand. If you do have a humidifier, it's OK to use it and have the amp in the same room, just turn it off for a day if you want to run the tremolo on the amp. I guess the tremolo needs to run in a dry environment.

3-Prong Plug installed for safety and at this time, I cannot locate the original 2-Prong Plug - if I locate it, I will update the listing and include it in the sale.

Sorry, I do not have a cover for the amp as it did not come with one in my purchase of it.

I have a single-button RCA footswitch for the Tremolo. 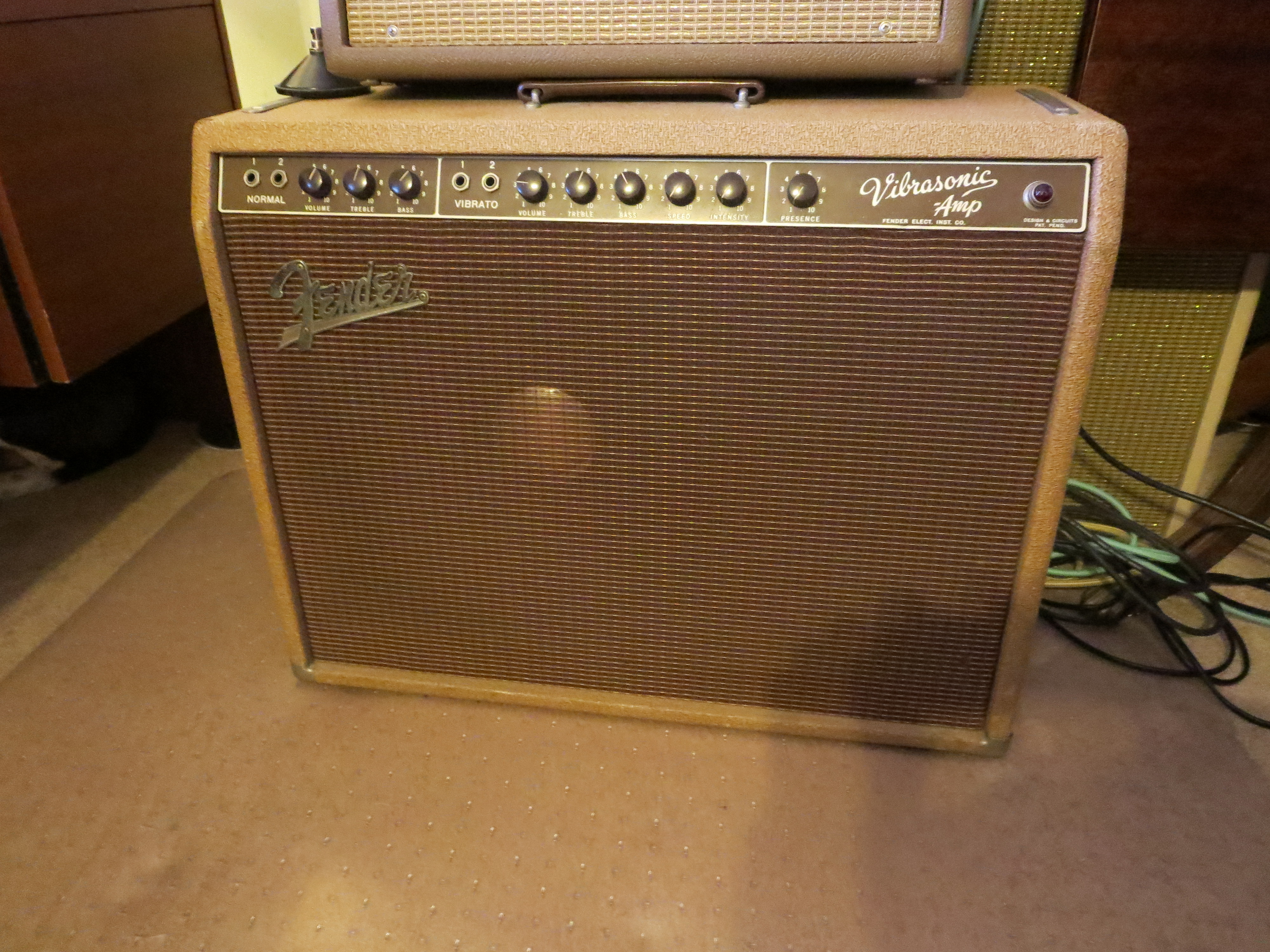 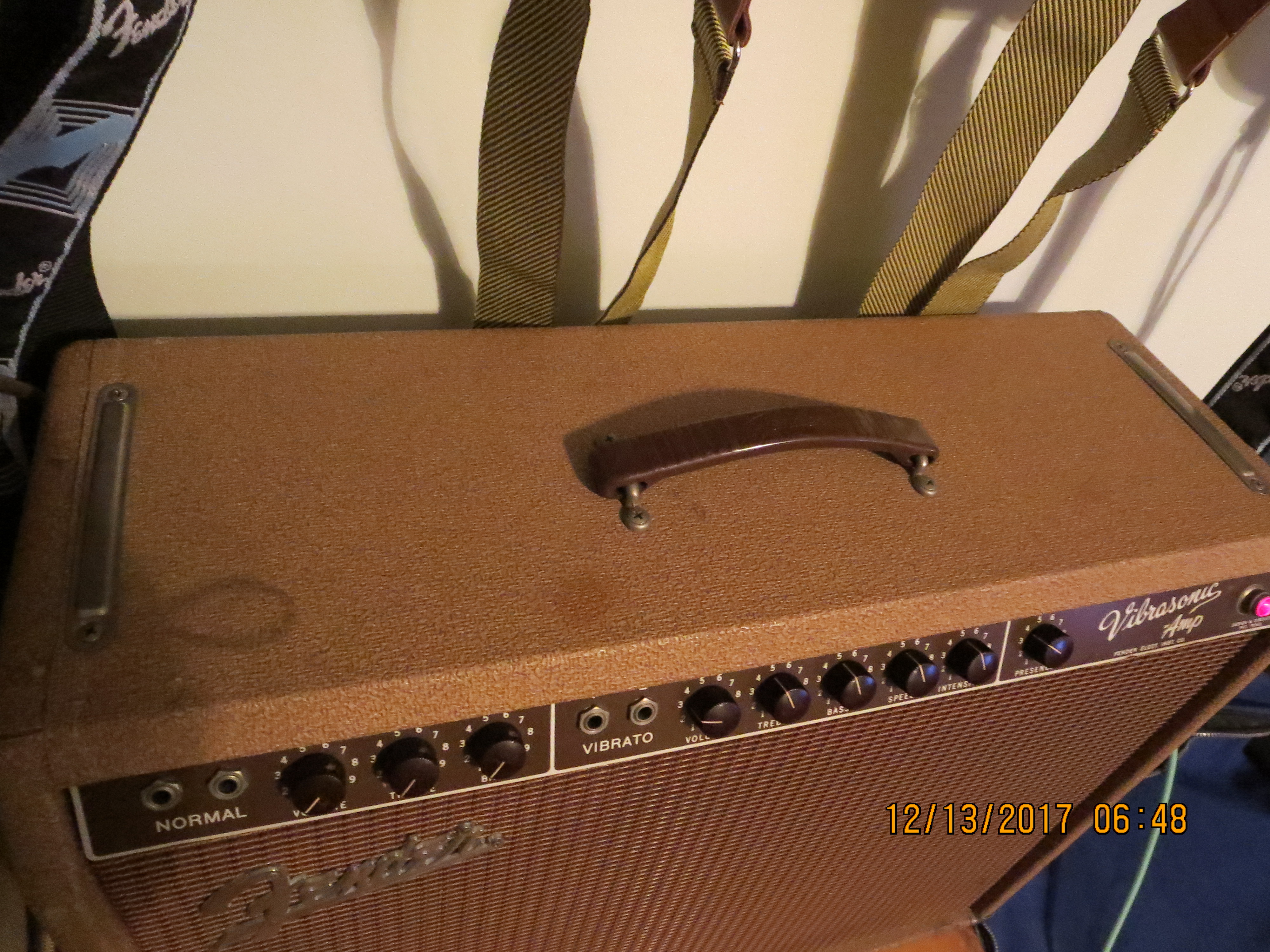 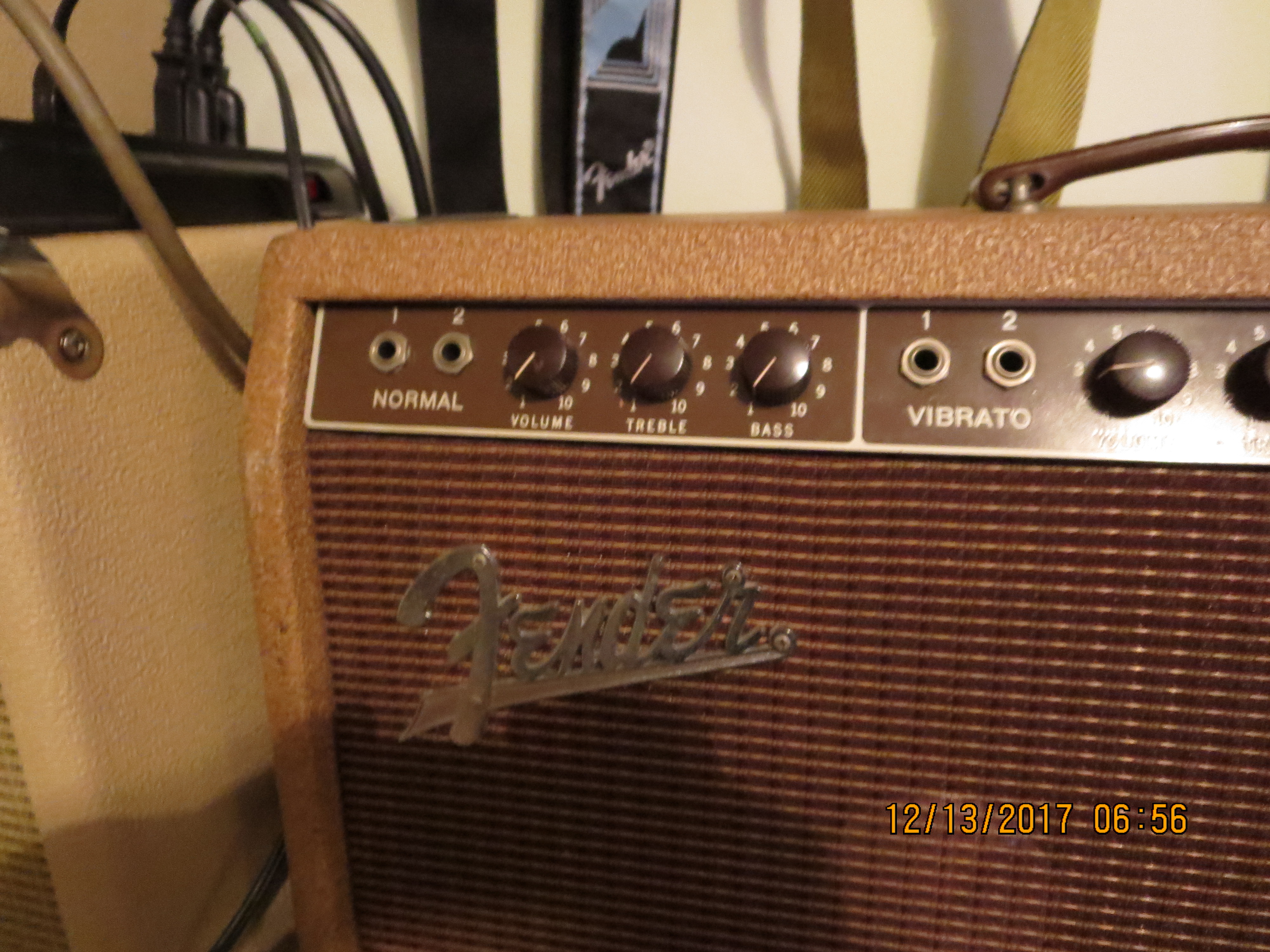 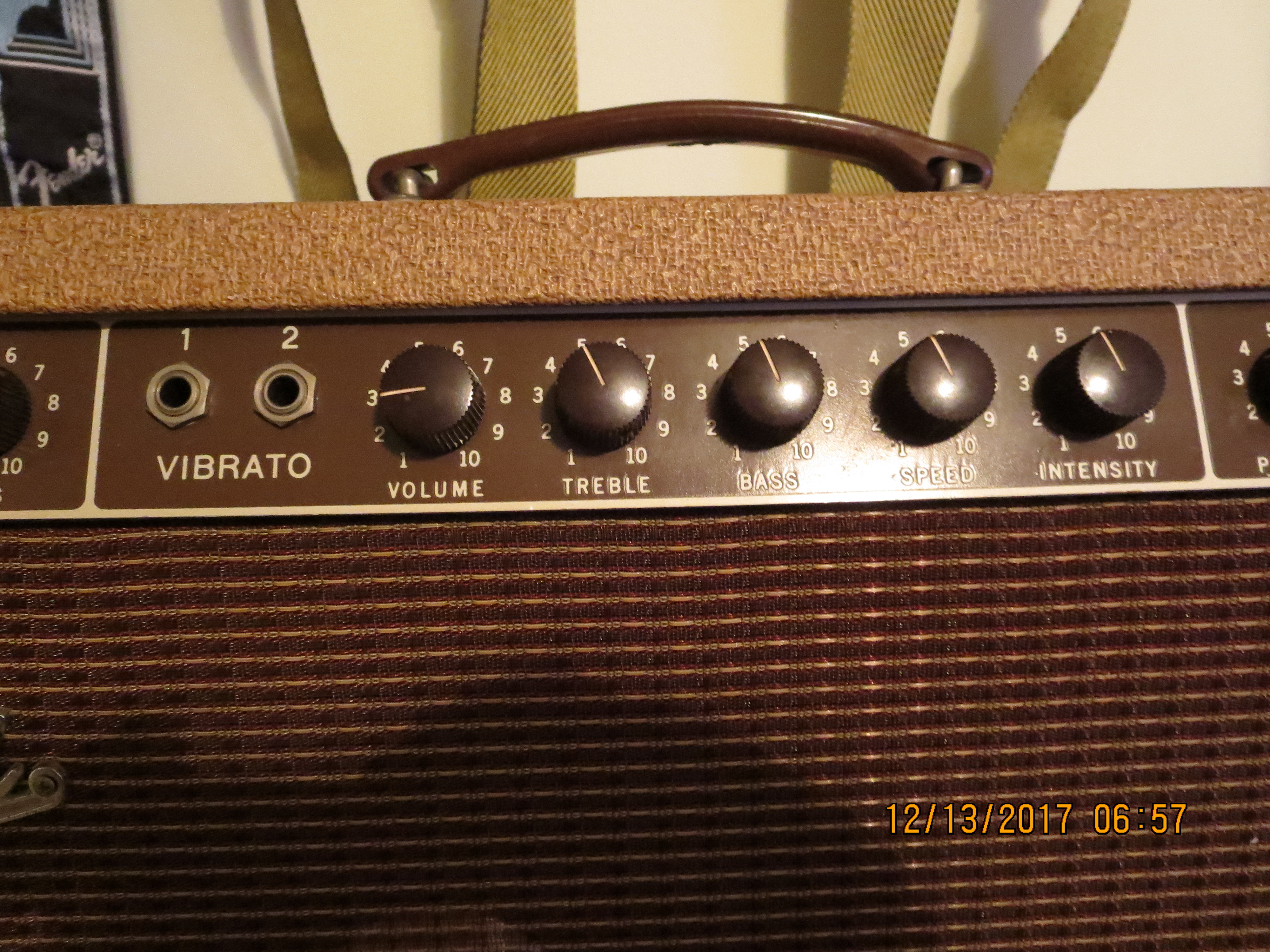 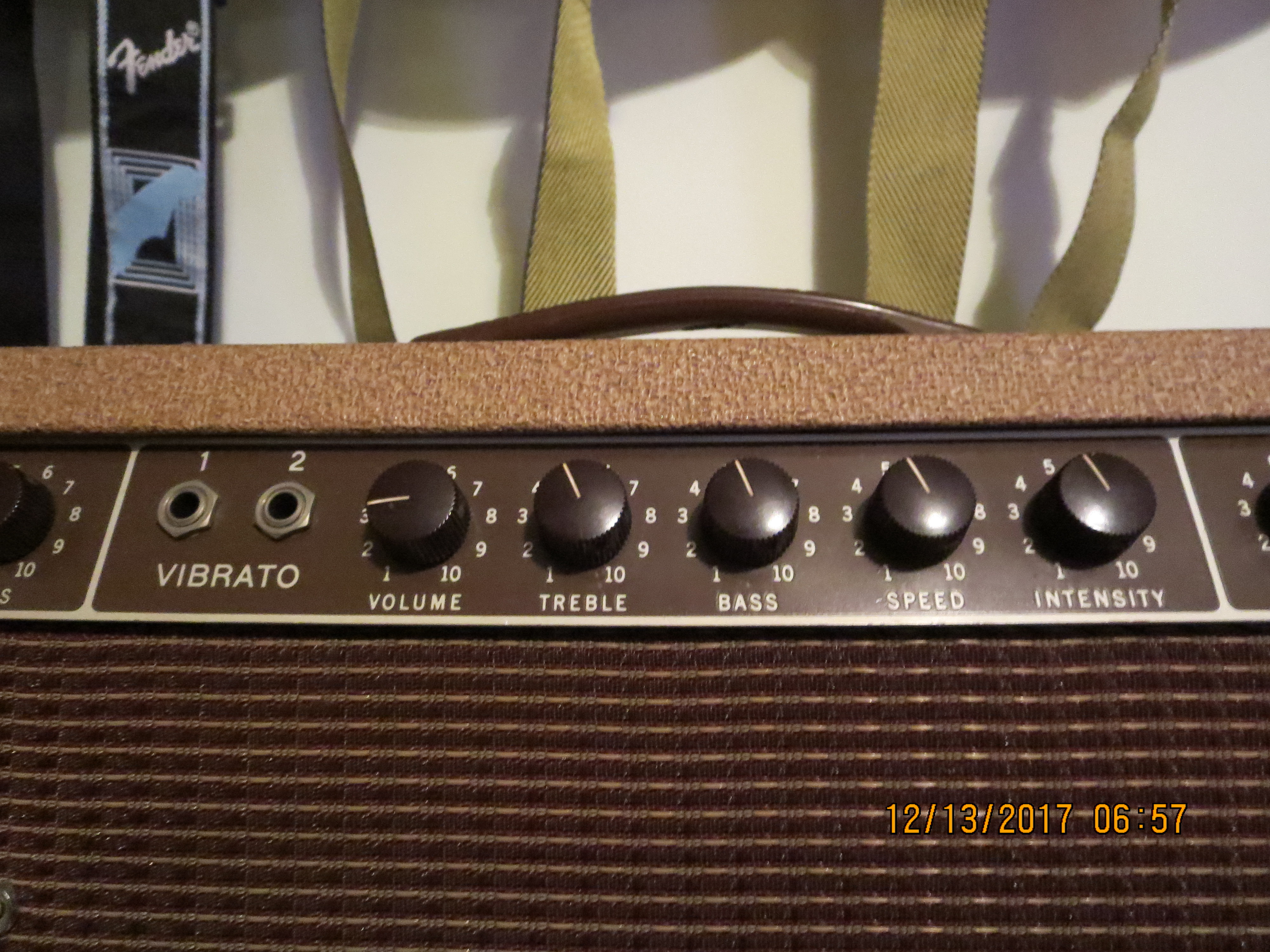 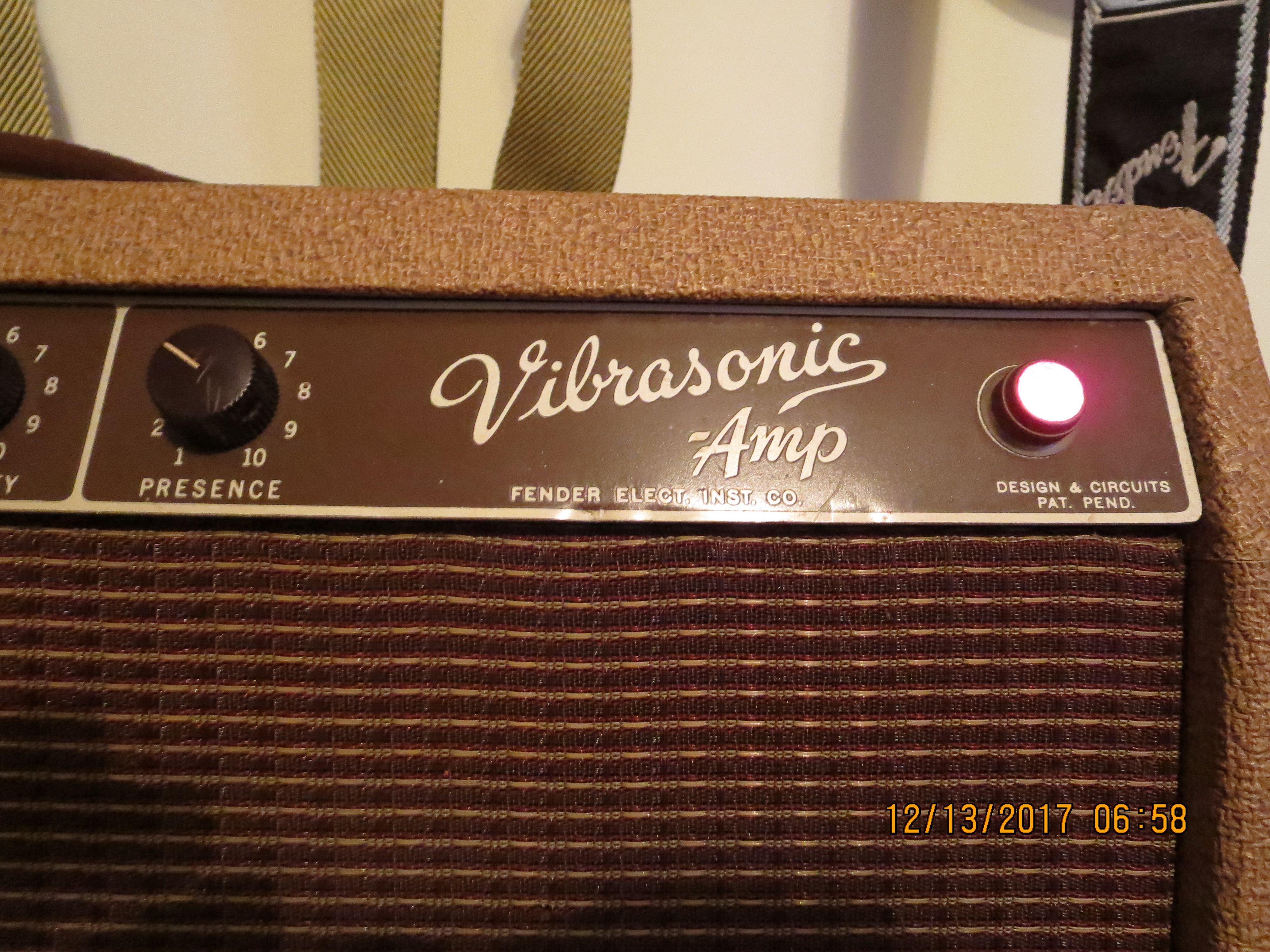 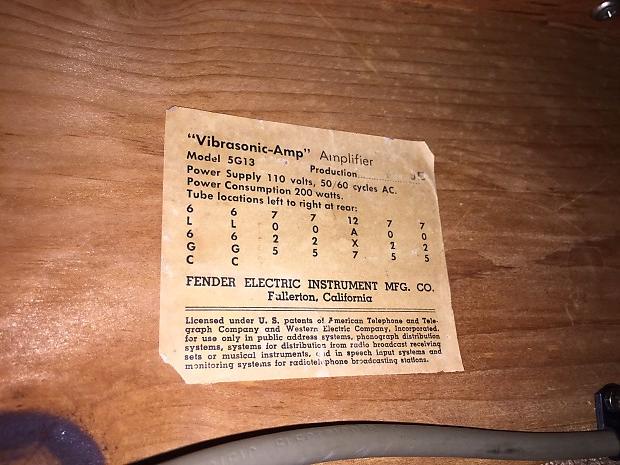 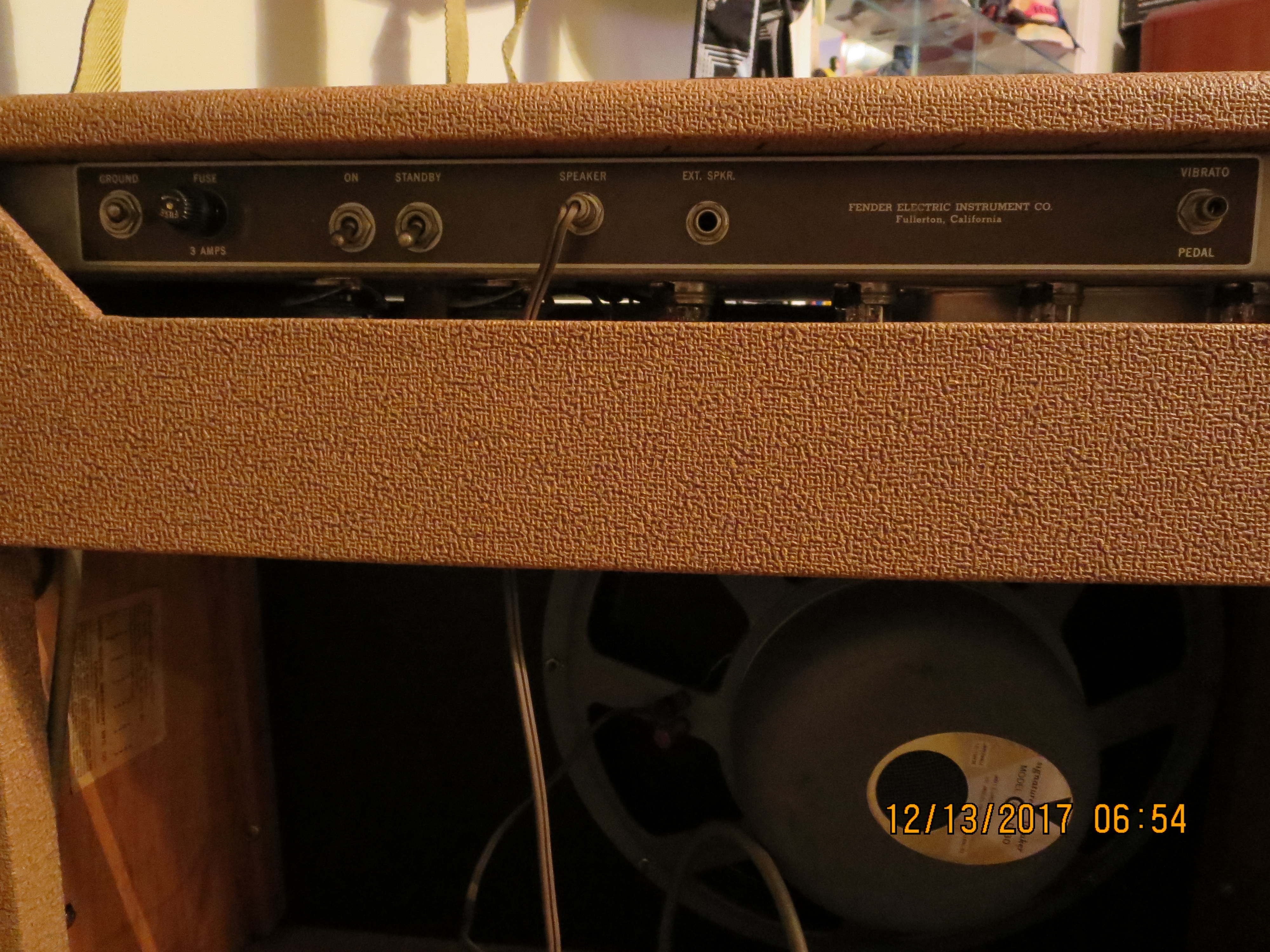 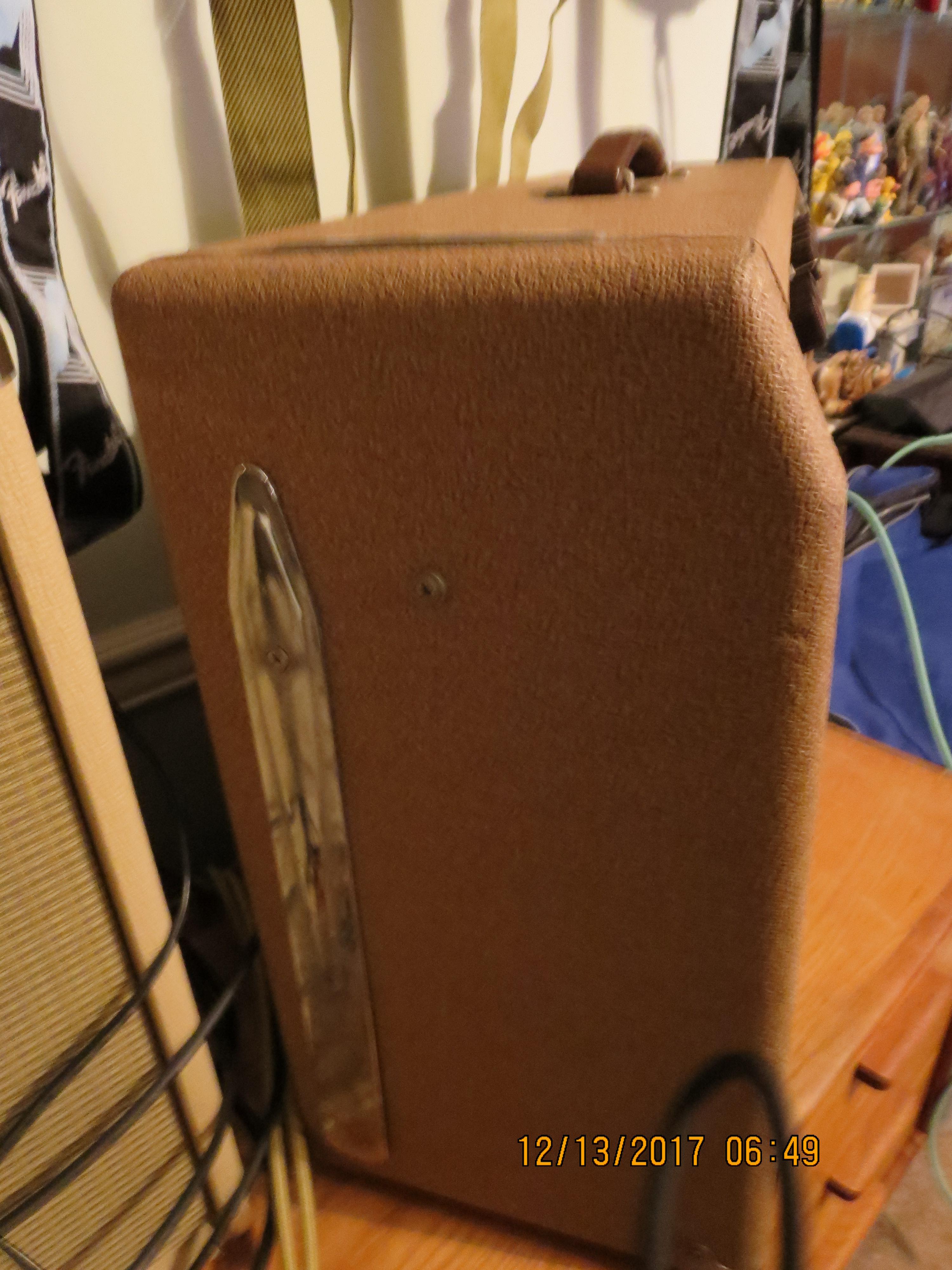 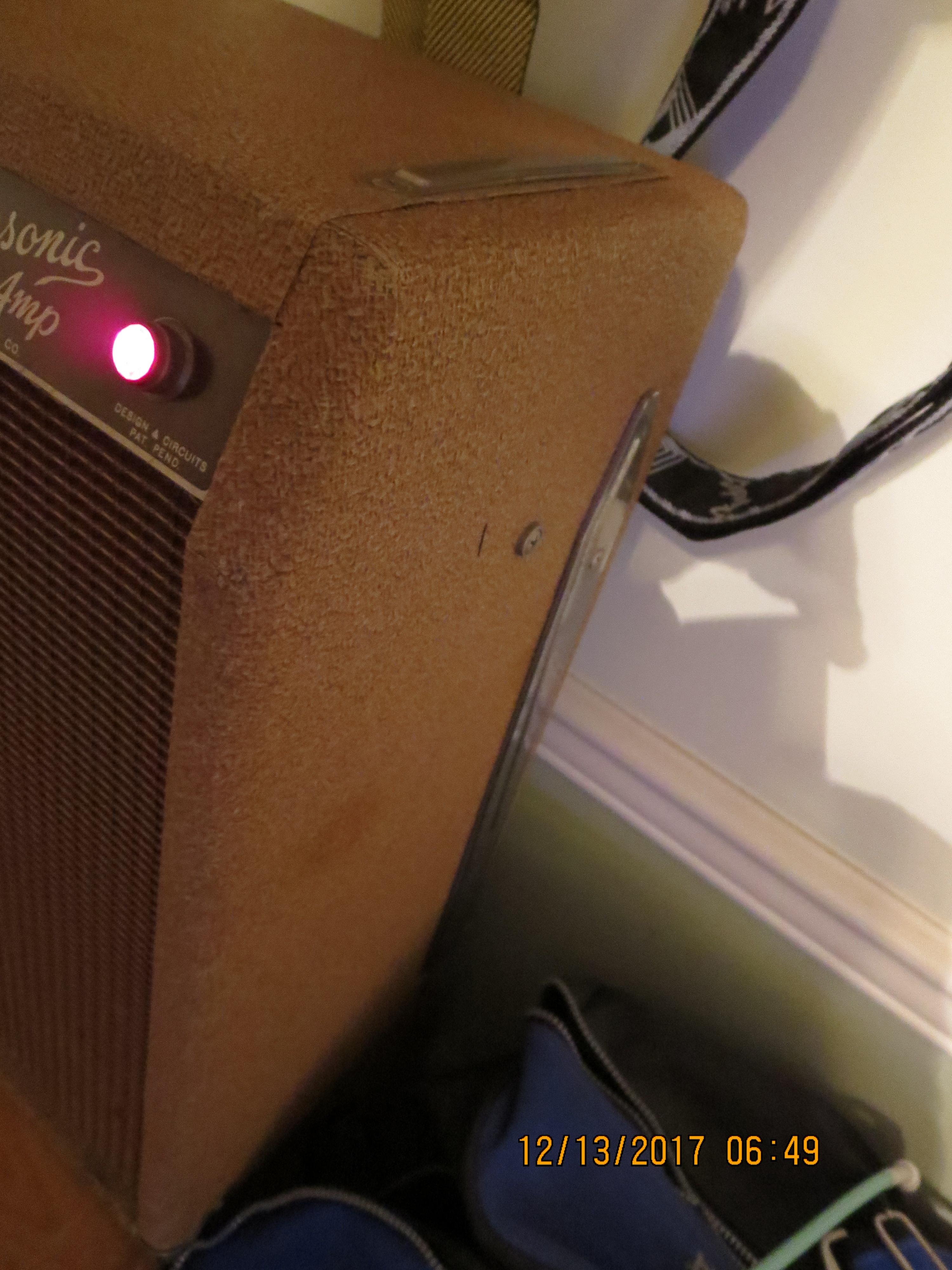 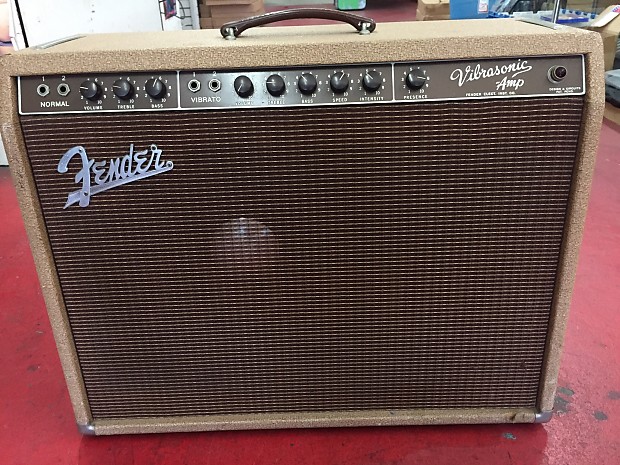 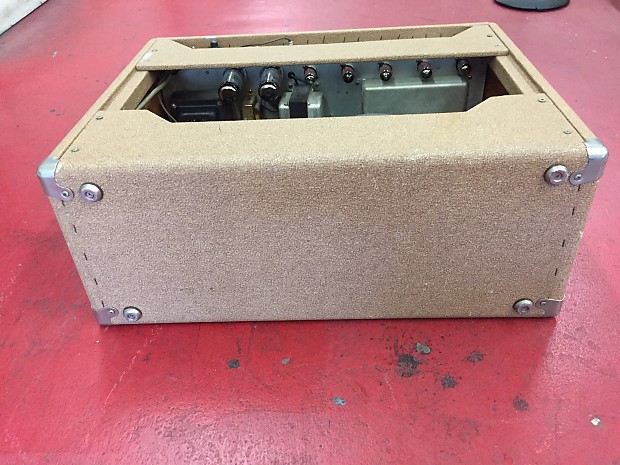 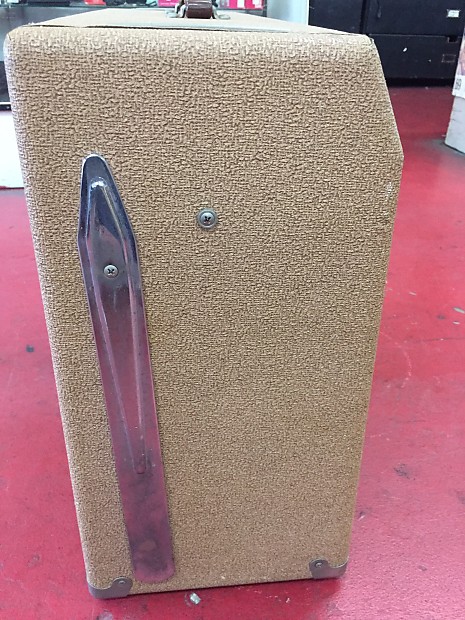 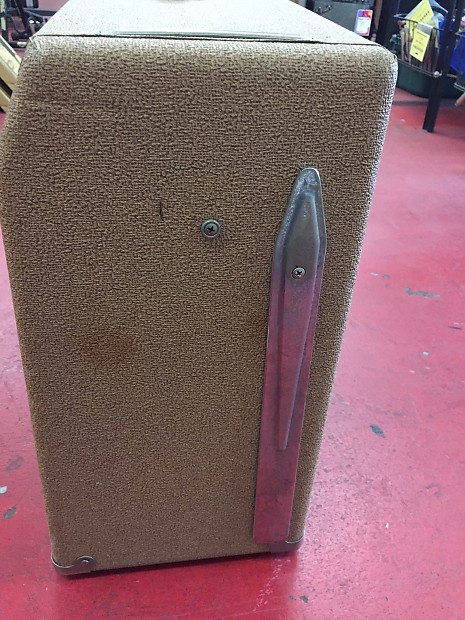 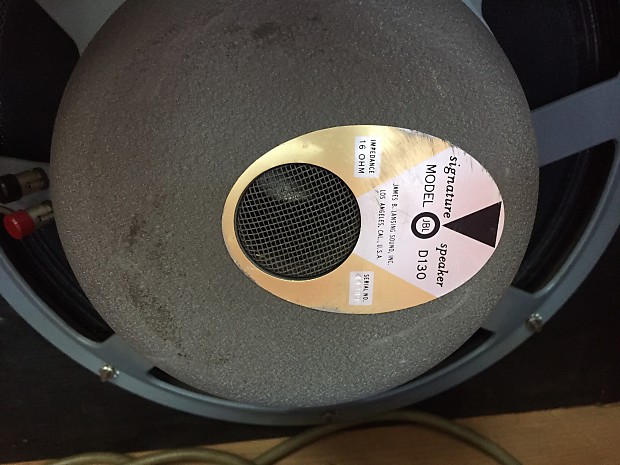 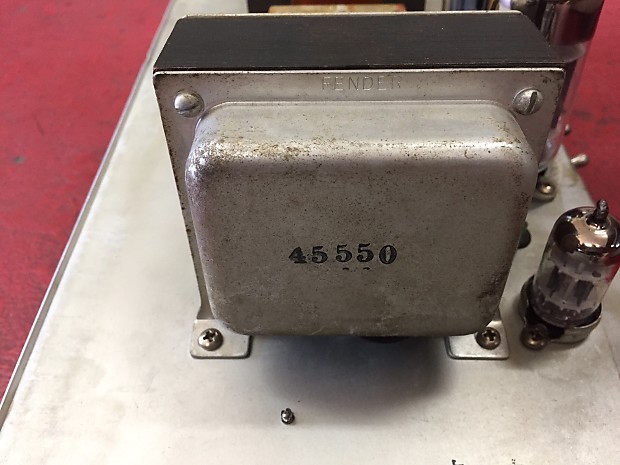 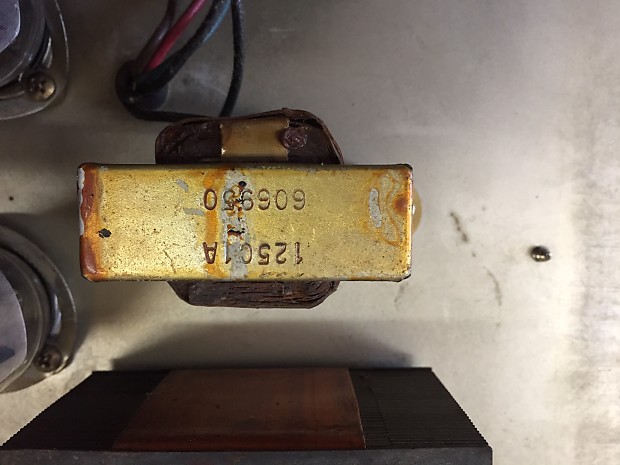 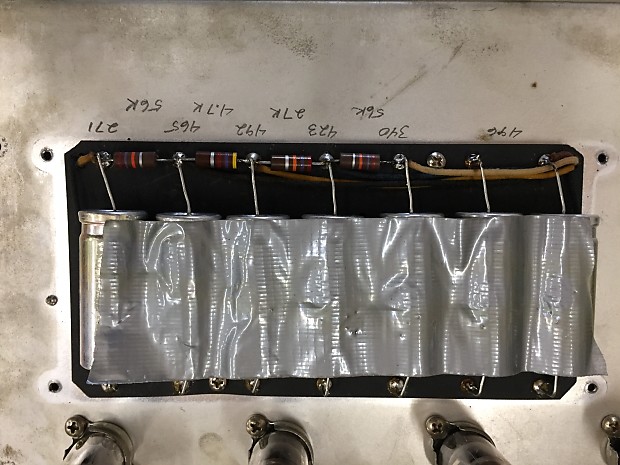 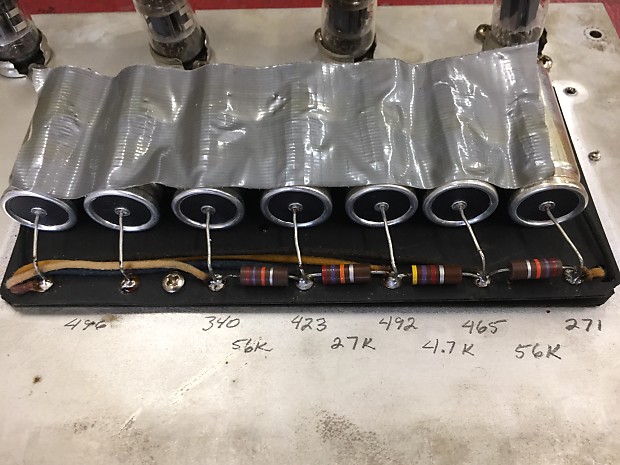 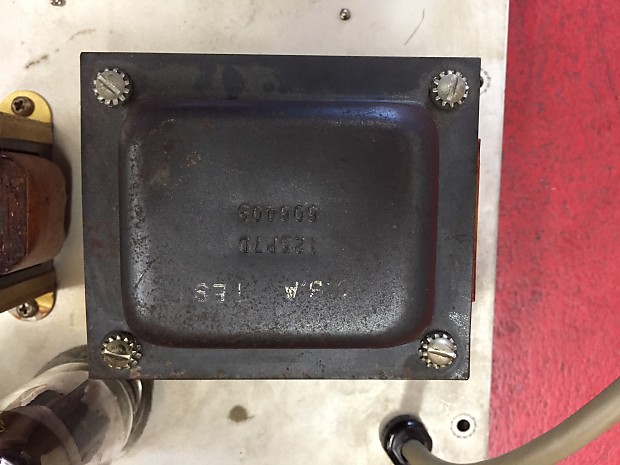 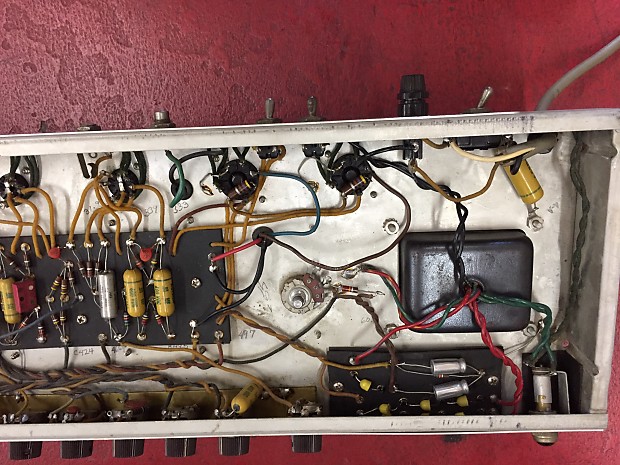 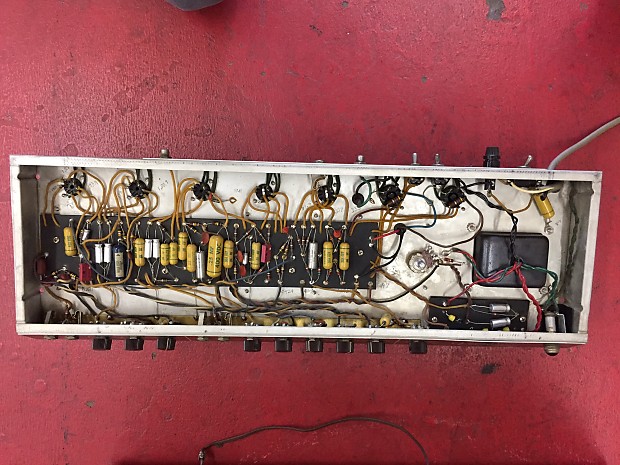 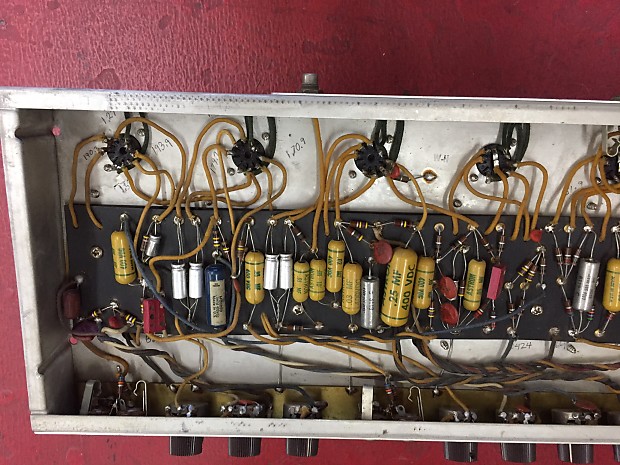 Best viewed on YouTube for the linked timestamps if you don't want to sit through the entire video.

Slightly over 40 minute demonstration of my 1960 Fender Vibrasonic amp that is up for sale on Reverb. I'm using my Fender Vintera '50s Telecaster, Fender Vintera '50s Stratocaster Modified, and Gretsch G6228 Players Edition BT (Broad'Tron) guitars along with a variety of pedals and a 1964 Fender Reverb Unit.

My apologies for the first 2 minutes of the video as the camera wasn't in focus but then automatically focuses at around 2 minutes 14 seconds. Also, the "B" Roll video of the pedalboard was slightly behind by a few seconds...d'oh!

It was the top of the line, most expensive amp with the 1960 new post-tweed models. Magnificent . Even more than the rare white Twin-Amp

Definitely a grail piece there, and in impressively nice condition. If only I had:

• a remotely defensible need
• the circumstances to play it at 3-5 on the dial
• the space to stow another example of big old iron
• disposable funds to fund such an investment in light of negative answers to all the above.

But it's a beauty, and I'd sure like at least to play through it some day.

I'm thinking bigloudheavy tube amps are like V8 classic cars: we're headed toward a culture where they're admired and given worshipful lip service, but seen and heard only on increasingly nostalgic, historical, and finally anthropological special occasions. I can imagine a possible future in which gasoline and tubes are so constrained - and the unburned hydrocarbons of one and electrical inefficiency of the other (not to mention the volume of both) - are considered so inimical to the common good that either will almost require a special permit to operate. (Or, I should say, "demonstrate.")

Anyone go to tractor shows to watch traction engines from the early 20th century run? That's what I'm talkinbout.

I still maintain a small herd of both (amps and cars), but with increasing frequency I wonder why.

Your knobs are in the right order, Nubie!

Bluecap. That is one of the prettiest faces I’ve seen - behind my wife of course. ( being sincere she won’t read this) Has that intense & intelligent beauty that is always so attractive to me. Who is it? And why does she want our tru-arcs...? I’m guessing a Gretsch player..?

Glorious. I had a silverface ome, which isn't close to yours, but I do love a JBL equipped Fender combo .

When tubes are outlawed, only outlaw recording studios will have tube amps? Dunno.

Wish I was in the states . They never come up for sale here :(

Wish I was in the states . They never come up for sale here :(

On the bright side Frank, if that "intelligent beauty" (she has an economics degree but can't distinguish between a city in England and economist John Maynard Keynes) has her way, no one will be able to buy that amp anywhere.

I'm terribly sorry Surfysonic for the slight derail. Lovely amp; I just sold my Super from the same month this past January. GLWTS.

On the bright side Frank, if that "intelligent beauty" (she has an economics degree but can't distinguish between a city in England and economist John Maynard Keynes) has her way, no one will be able to buy that amp anywhere.

I'm terribly sorry Surfysonic for the slight derail. Lovely amp; I just sold my Super from the same month this past January. GLWTS.

She’s a fan of the Jam? Probably just a memory slip like when I call my wife mum.

Just looked her up.. Will follow her on FB. May be a while before I understand the meme re the tru-arc though

Maybe we could leave the politics out of my for sale thread? Thanks.

The VibraSonic was the same as a Concert Amp, but 8 ohm with 1 JBL D-130. Only the output transformer & feedback resistor are different. It was Fenders Pedal Steel Amp....clean, full range.

Great amps! Mine both had the knobs backwards...Bass, Treble, Volume.