I just thought that chinese lefty fake was classic. I'm very surprised that Goodwill caught on about it being fake but they blamed it on the F holes in stead of all of the other actual obvious reasons, to us.

Afire -- I am STUNNED! I thought I was the only one in the world who sought out vintage Gruen watches! There have been a LOT of interesting ones on ebay, including parts, mostly watch faces/dials. Vintage Gruen watches from the 1950's were extremely well made!

Afire -- I am STUNNED! I thought I was the only one in the world who sought out vintage Gruen watches! There have been a LOT of interesting ones on ebay, including parts, mostly watch faces/dials. Vintage Gruen watches from the 1950's were extremely well made!

I could tell you were a gentleman of distinguished taste! I've been hunting Gruens for 20 years now with as much fervor as hunting Gretsches. Well, much more fervor in more recent years, actually. Just when my G(retsch)AS started to subside, my G(ruen)AS swelled up to fill the void.

My tastes lean a little earlier. Mostly pre-Curvex tanks from the "Guild" era, especially Quadrons. But the one I spotted on Goodwill was a later one, a two-tone Pan Am 10k gold fillled with yellow body, white lugs, and steel back. Not great condition, but kind of cool, the kind of thing I'd get just to have it for a little while and inspect it and pass it on. I think it ended around $150, which was about right. 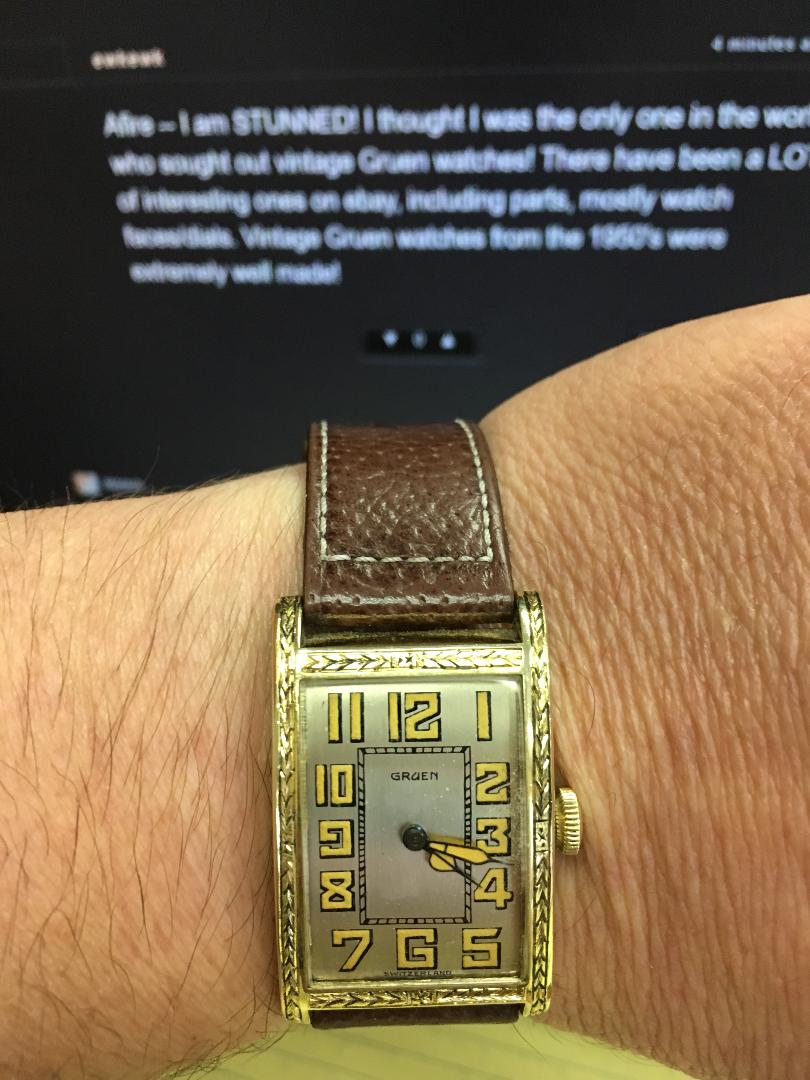 It's the only example I've ever seen and appears never to have encountered a buffing wheel, which will quickly ruin these intricate engravings. I actually scored this one early in my collecting journey, but sold it not long thereafter. A few years ago I posted a picture of it on a "the one that got away" thread on a watch forum. Turns out the the person I had sold it to 15 years earlier was on that forum and still had it and we worked out a trade to get it back to me.

Check this one out Sam. Nice Gretsch Snare drum.

Did anyone here end up with this?

She's a crusty ole gal but she just needs some love. JD? I 'can't believe the price, so far.

That's an early one. A Brooklyn Roc Jet.

Well this is strange.

Well this is strange.

Oooo, check This lapsteel out.

Very unique. Wish I had a little more disposable cash.