The problem with a zero fret is that not all guitars are available with them. I never had one until now because they only came on guitars with Filtertrons and the trade-off wasn't worth it. I think all guitars should have them. I tried to get them to put them on the BZ models.

The person I'm aware of that has a real aversion to the zero fret is Brian Setzer. I suppose TV Jones could fill us in on exactly why that is. I don't think I've heard an interview with Brian that specifically asked the question, but he has gone to great lengths to have them removed from is arsenal of vintage 6120s.

Seems I remember it said that he was having trouble keeping it in tune - i think it was his tech talking about his '59. I don't really understand that but he also used pretty light gauge strings. .009 for high e, right?. I'm not a Setzer expert by any stretch but this is what I recall.

I like the consistent feel of fretting a note that you get with a zero fret guitar.

I actually like the concept of the zero fret, and the original '60s 6120s I used to have worked ok with them. But every new Gretsch I have had with a zero fret wore quickly and the dreaded pinging was realised. Drives me crazy. No pinging with a regular nut.

I don't mind adjusting stuff when I buy a new guitar but I'm not buying a new guitar only to take it straight to a repairer to fit a SS zero fret! I am happy filing nuts, bridges, adjusting this, changing that - as long as it's something I can do myself. If zero frets didn't ping when I bent a g string at the second fret I wouldn't have anything against them. But they do, at least for me.

for a lot of folks Jimmy. That's the main reason you don't see them a lot, I think.

I have recently experienced that phenomena you guys talk about where bending the string makes it slide on the zero fret. It isn't a problem yet; it only happens if I try to make it happen, but I can understand how it coulld become an issue. Maybe they need a setup closer to the ZerO Glide Nuts where there's hardly any space between the fret and the nut. Perfection is a journey, not a destination. BZ

ha bz..reminded me of this...i used to pass this sign nearly every day…when nyc still had industry that is…eagle electronics factory

"perfection is not an accident" 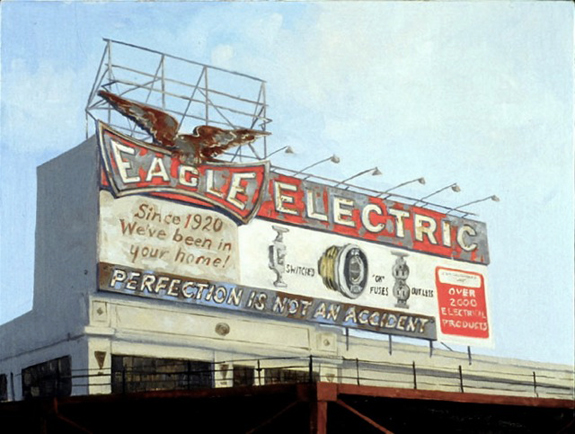 As long as the guitar (action) is properly set up and there are no buzzes, pings, or ghost tones, I really don't care one way or another. Though I will admit that to my mind, a guitar that does not have one, has one less thing to worry about, re maintenance...

As long as the guitar (action) is properly set up and there are no buzzes, pings, or ghost tones, I really don't care one way or another. Though I will admit that to my mind, a guitar that does not have one, has one less thing to worry about, re maintenance...

That's interesting. Re maintenance, to my mind, having a zero fret lessens maintenance by virtue of ensuring the slot depth in the nut isn't a factor for proper string height. Of course the slots need to be wide enough so they don't bind and ping when tuning but I enjoy the simplicity a zero fret offers.

Mainly, I'm thinking that a nut is a simpler, easier element to change out or modify to a specific setting. In a pinch, you can do it yourself. Also, I believe that changes in the curvature of the neck is less likely to have an effect on general playability on non zero fret instruments. Note that less means just that. The degree of "less-ness" is of course, debatable. I'm definitely not against zero fret craftsmanship, just slightly more wary or pragmatic about them...

So weren't zero frets on a lot of cheaper guitars in the 50s and 60s? Is that where the aversion comes from? I know there's a video on youtube where Chet talks about the 6120 and he's holding an early Dyna sonic model and he talks about upgrading the later ones with zero frets. If it's good enough for Chet...

I do know a lot of Gretsch popular opinions of the last 25 years or so have been shaped by things Setzer has done. As a guitarist when I run into another Gretsch guitarist today 9 out of 10 are playing a 6120 and it's probably because of Setzer. I think when Setzer says he doesn't like zero frets a lot of people listen to that and make the change. Same with larger frets and pinned tune-o-matic bridges. Ideas I don't agree with.

So weren't zero frets on a lot of cheaper guitars in the 50s and 60s? Is that where the aversion comes from?

They were, but I'm not entirely sure that the zero fret was there because they were cheap. Zero frets seem to have been popular with European builders in general, regardless of price range. And of course, back in those days, most European guitars were relatively cheap (at least compared to today). But many of them were very nicely built fine guitars.

I like the concept of a zero fret, and would love a 59 LTV, but I've never been able to try a guitar with a zero fret to see how I'd like it. I bend strings a lot around the first few frets, and all the stories of wear occurring in the nut and forming pings scared me away from them. I just didn't want to drop a lot of coin for a guitar only to have to worry about replacing a zero nut soon after.

Zero fret is simply "not" the standard. That's the reason it seems players may have something against it, but really don't. I honestly have never played one, because I don't seek them out, but will now.

Wouldn't the only way to actually test the Theory be having two alike Guitars, one with zero fret and one without ?

I just recently got my first zero fret guitar. I've always wanted one because it seemed like such a good idea, but they never put them on guitars with decent pickups. So now I have a zero fret and great pickups. I understand what peope are complaining about, but I think Gretsch just has their nut too close to the fret, which is easy to remedy. I've actually thought about changing it to a ZerO glide nut. Maybe I should change all of my guitars to ZerO glides.

OK, but that must take a while and what would be so hard about having a luthier install a new one, maybe even a stainless steel one that would last? I guess I have a lot of guitars but I never wear out frets. I can't remember the last guitar I had to have refretted because of wear!

I had 3 zero frets in my MYI and I just couldn't take it anymore. I probably should've put in an SS zero fret but honestly I was done with it. It took no time at all for the fret to get a groove cut into it. Last one I replaced I must've rolled the fretwire 1000x to harden it. Within a month it was driving me crazy again.

Once more with feeling, Billy.

Once more with feeling, Billy.

I practically never bend any string. What I particularly like about a zero fret is that it ensures that all strings are an even height above the fretboard. With Chet designing Gibson's Country Gent I'm very surprised he didn't ask for that feature.

I had zero frets on both of my Anniversaries, and had them pulled. I used to do a lot of gigging with my '69 Annie, and had to have the zero fret replaced a few times as I do a lot of string bending, and am pretty heavy on the Bigsby, so the zero fret would wear out pretty quick. It became too much of a pain to keep taking the guitar to the guitar doctor to have it replaced, so I had the thing pulled. The second Anniversary I bought, I had the zero fret removed right off of the bat. I couldn't be bothered spending money on something which needed replacing so often. I can actually understand why Setzer has the zero fret on his 6120's yanked. Pretty sure he uses 10's or 11's on his guitars too.