I've been on looking at various Electromatic Jets for some time now. I wanted something that can be a bit more of a 'daily driver' than my 6120.

And just when I had settled on getting a blue DC Jet, THIS thing shows up on my Youtube recommendations. I fell head over heels for the color and ordered it the same day at Gear 4 Music, who had posted the video. In less than 48 (still agonizing) hours a van showed up with a box... 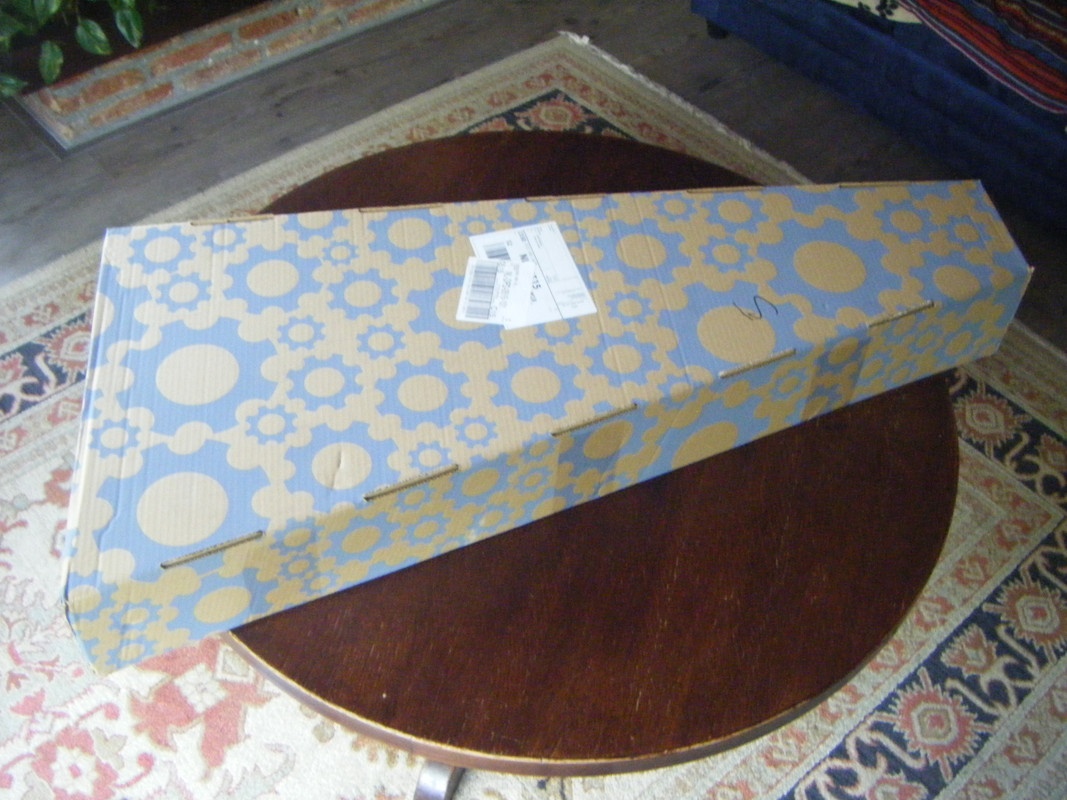 With another box inside... 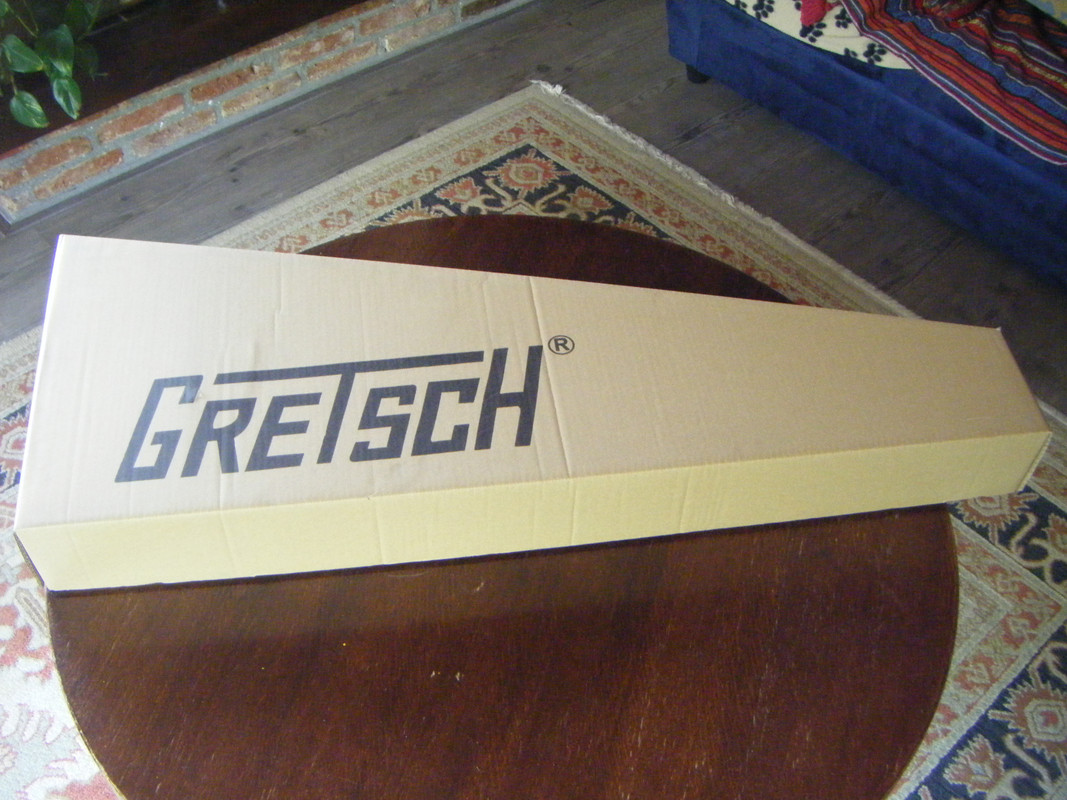 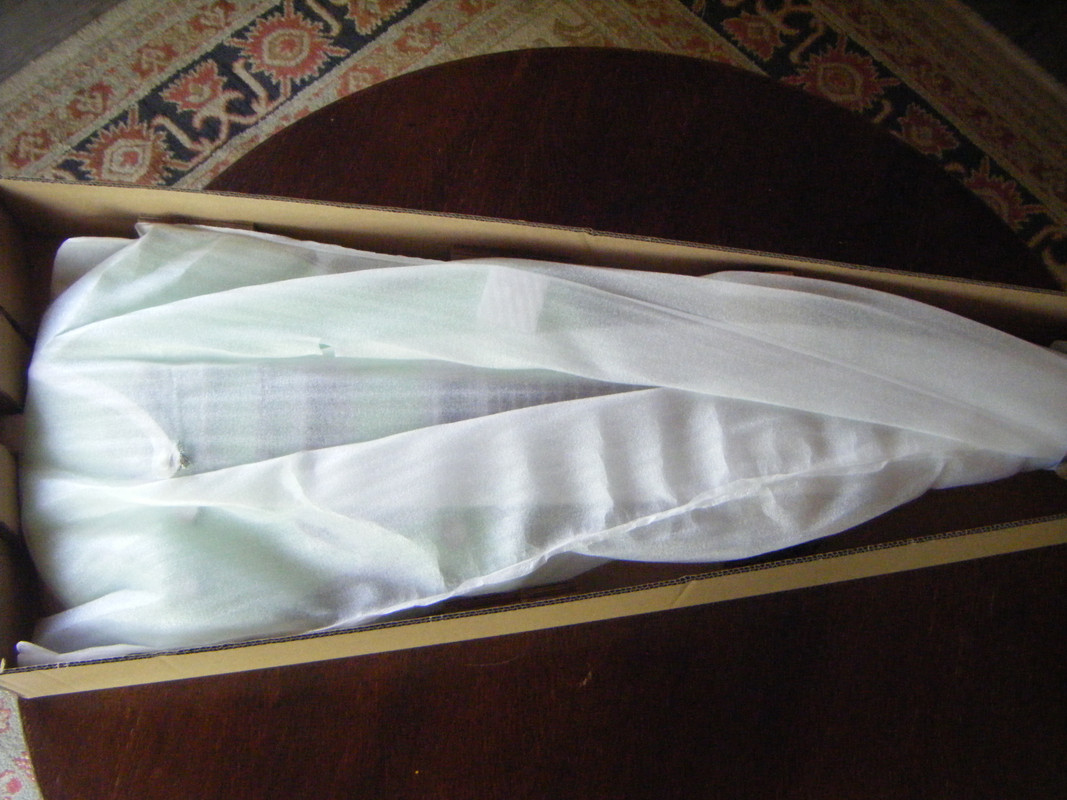 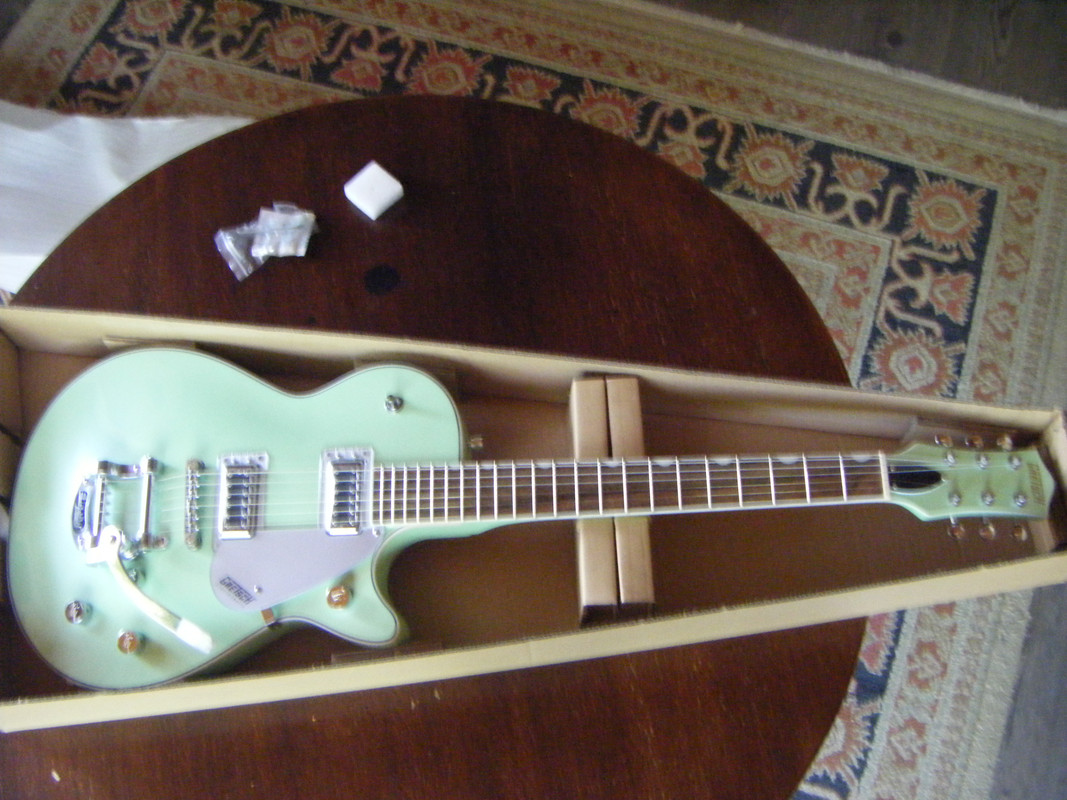 Let's get all the protective stuff off and see what it really looks like in part 2. 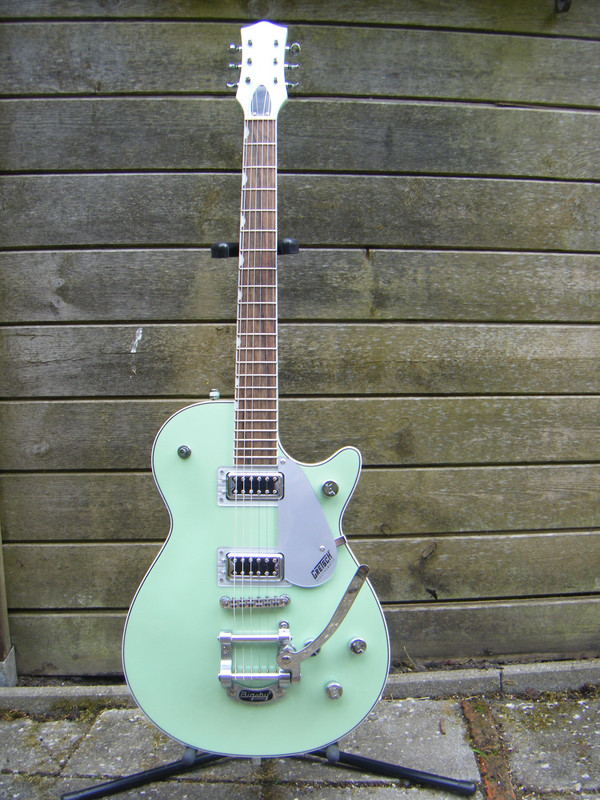 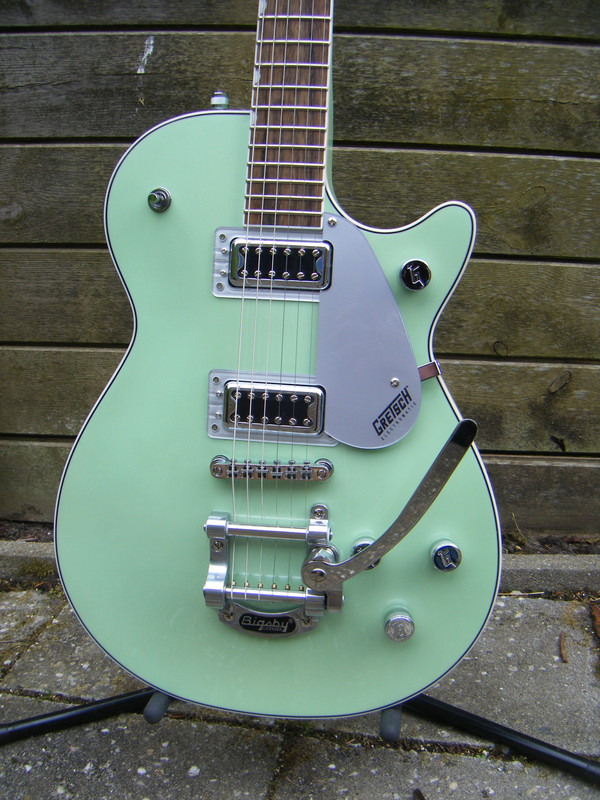 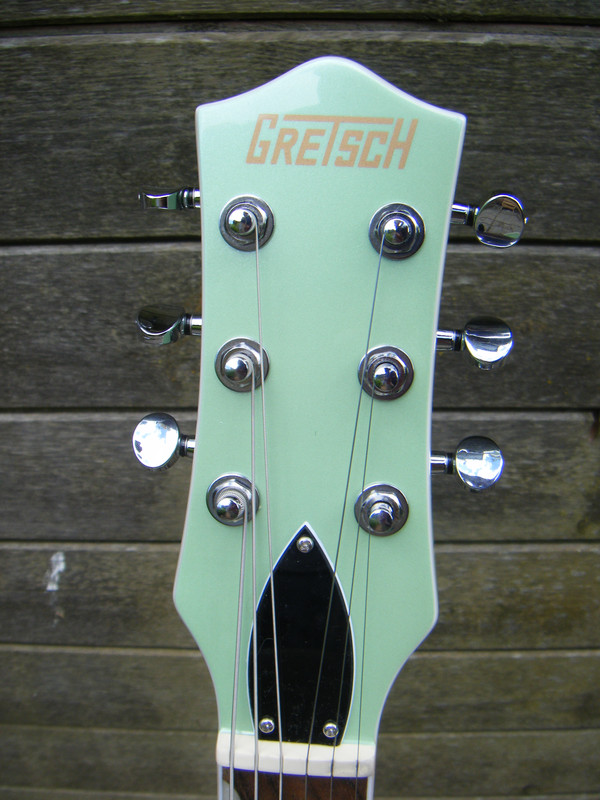 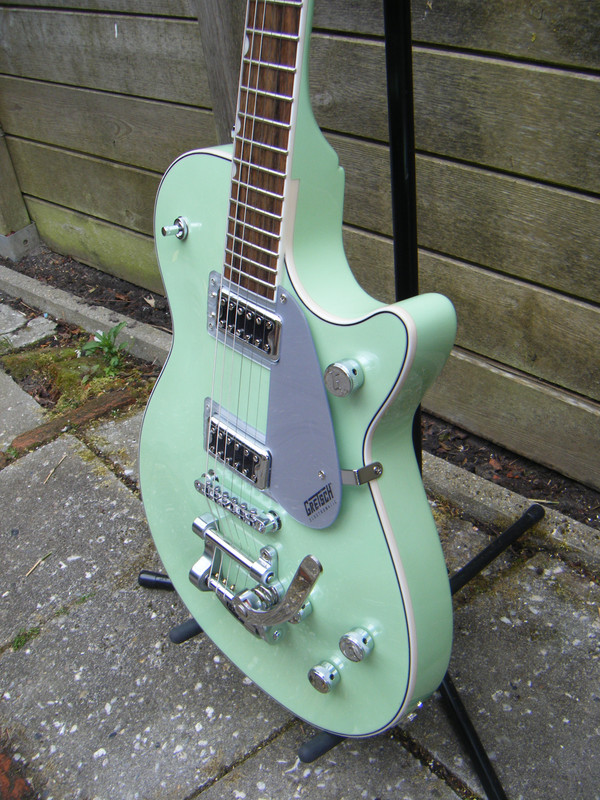 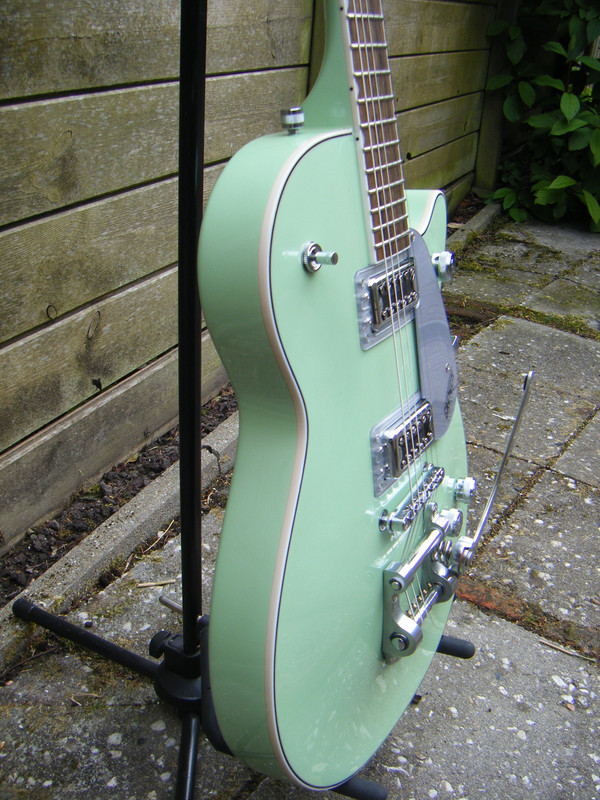 Let's start with the finish. It's very well done, there's a fine white/silver flake in it that's almost pearl-like. There's a bit of clear coat build up in a couple of corners, other than that really well applied.

The neck is really comfortable, fretwork is flawless.

The pickups are definitely filtertrons but they have their own flavor: they're a bit snarlier and a bit more nasal but not in a bad way, a bit tele-ish. I like them a lot. Notes just fly out with little effort. Combine that with the super nice neck and you have something that feels and sounds like a pro level instrument.

Oh, the three way adjustability is a wonderful feature that should be seen more on high-end instrument.

Are there bad things? Yes, there are. Action was setup way too low and the nut pinched the B and E string. The tab in the jack needed a little bend for better grip. The pots were bit scratchy from sitting idle and there was rust on the threads of the strap buttons.

In short: a stellar guitar, certainly at this price point but needed some setup and mild tech work.

Definitely a great looking guitar....the color (seafoam green?) is killer!!!! So very tempting with this post......you'll have to check in with first impressions.(quick edit: Just saw you posted the visual inspection so tone is next!) Congratulations!!!

Yeah, that color looks great, especially in the second photo!

Love it. Color-matched headstock and all-around binding are the business. Enjoy!

That's purdy! I'm pretty sure it needs a Reverend soft spring for the Bigsby - Electro solidbodies always whammy way too stiff for me.

And I just can't think what else it might need.

Dig that finish! There was an Electromatic Double Jet not too long ago that had that top finish w/white back and sides .

Thanks for the detailed initial analysis.

Every year around this time I start to think of getting something similar in color. Very nice. Congrats

Thanks for all the comments. For now I'll live by the 'if it ain't broke don't fix it' mantra. The spring is indeed a bit stiff but I don't mind.

There are plenty of clips and demo's out there and anything that doesn't have tonnes of gain in it, would be a fairly accurate representation.

If I had to describe the tone it would a 'romanticized fifties rock 'n roll'. Compared to regular filtertrons these blacktops put a bit more emphasis on the higher mids. They're still very clear sounding and very lively with a Telecasterish snarly twang. I wouldn't change them unless you have something very specific in mind. For who's interested in the numbers, I measured the DC resistance at the jack: both pickups measure 4.27K.

The tone knob is a bit strange. Normally it would roll of the highs but this does something in the mids. Almost like a wah.

What else can I say? It's pretty, it's well made, it's comfortable, it's plenty versatile, it's enjoyable to play. Apart from the minor issues I mentioned, it's way better than I expected for a guitar at this price point.

Congrats, she's a realy beauty! Some years back, I bought a Gretsch G5436T White FSR Pro Jet with Blacktop Filter'Trons. Played great, looked great. My only issue with it was that it weighed like a boat anchor. I moved it on as I couldn't abide with the weight.

I weighed it on my kitchen scale and it read just short of 3.9kg.

Nice, not bad! Thanks!