well... he's tryin one out, but its still a cool picture of our Twang'meister hero.

That Strat looks so small against Duane's body. I think he looks much better with his regular axe in hand!

I thought you were talking about this guy :) 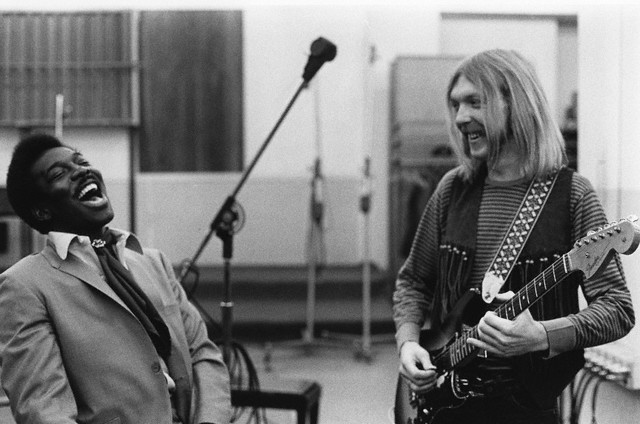 Rosewood neck so it had to be 1960 or later for that pix of him. Cool pix

I think he stuck with the right choice.

Okay, now that Duane himself been outed, I can finally admit it - I own a Strat!

well... he's tryin one out, but its still a cool picture of our Twang'meister hero.

My eyes! My ears! Say it aint so! Aaahhhrrgghhh!

super cool pic...but the real story was, that he was only there to pick up one of those accordions on the back wall!!

and notice the groovy bongo's on top shelf!

Its a really great picture , but having spent much of yesterday beseeching ' Alexa ' to play Duane's oldest hits . There is still the feeling that it would be perfect if supplanted with his trusted ' Gretsch ' !

Deed once told us the story of an occasion where Duane and Buddy Holly tried out each others' guitars. They swapped instruments, strapped them on, and both immediately laughed at how ridiculous the other looked with the 'wrong' guitar.

Daniel, an excellent jape. Wilson Picket gets it.

I forgot where I read it, but DE did own a strat, a 59 I believe, that eventually ended up in Vince Gill's collection.

but the real story was, that he was only there to pick up one of those accordions on the back wall!

Accordion to Billy Zoom, they would have a 'Filtertron' sound, so Mister Duane, he say no.

And further to Billy's remarks, we may now also consider the recent Gretsch fixation with 'Squeezebox' capacitors in an entirely new light.

What a cool picture! Duane Eddy is a personification of "Cool" anyway I suppose. He could be holding an ice cream cone in this picture and still look cool.

What is he doing so high up on the neck?

Great question Buddy. It looks like he may be playing the intro of Movin' N Groovin'. A very fresh Carl Wilson, just out of shot, is listening carefully and suddenly has the Great Idea to play the same figure on his Fender for the intro of Surfin' USA.

Speaking of people not usually associated with Strats playing Strats, check this out:

Okay, now that Duane himself been outed, I can finally admit it - I own a Strat!

Well, as long as you have more Gretsches, it's all good!