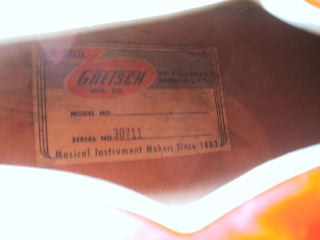 Here is an oddball serial number:
SN 10241 (no serial number on back of headstock) on a 6125 single annie green, "Great GRETSCH Sound" Label, with thumbnails and hilotron
ebay link

WOW you guys have been busy. Thanks! I just added these to my logs, and will try and get them online this weekend.

Joe, I'm going to try to get to adding some more guitar models soon, but I don't know if I'll get to it until after the holidays.

Good news is I paginated that chart, so it's a lot easier to get around now.

Think of the harmonic convergence here... two guitars, potentially constructed next to each other 48 years ago... and are up for auction within a minute of eachother! Cosmic!

Pretty cool actually! It also is a great example of batching. You can see first hand two guitars from the same batch with the same specs.

Hi Joe,
Surfing the net recently and turned up an interesting 6119 example. It's S/N# is 45715, and is listed as having painted on f-holes and 2 Hilo pick-ups.. clearly an example of the Electrotone body (second generation Tenny design). Looking at the on-line logs I notice that the latest example of the 6119 hollowbody (original Cherry red design) has a S/N# of 45470. I guess that might indicate that #45715 is from a very early, perhaps even the first batch of Electrotone Tenny's. Agree?

Hmm...I think the log is wrong, I may change it. 45470 should be an electrotone body. This is a wiered thing:

406XX batch has cherry finish and filterTrons, and I believe it to be the last batch of filters. But I have seen 40146 and it was a electrotone body with double pickups that were replaced by Gibsons. Right not I am not possitive of where I had seen it. I am almost wondering if the serial number was recorded wrong...Gasp! 419XX should be the first with HiLos.

I still have a problem with the 1965 6120 above, but the owner says it is all real. I have spoke with him in the past. It is an annie size body (which was the same as the single-cut 6120) with a real mortise and tennon Chet neck (notice the side dowel?), and not a dove tail. The side dowel was not used since 61, and never on an annie body. In 65 it would have had the back dowel, if any at all...again, not on an annie. If it was made in 65, they would have adheared to the back dowel on a mortise neck.

Did it come from the factory in 65 this way? Gosh, I just don't know. I suppose it could have. Could this actually be a 61 Chet Atkins that went back for work and got re-labeled? More likely to me. If I had to guess, that would be my answer. Heck, that would double its value over some modified or custom order 65.