Don't know if the full interview exists elsewhere. This is from March, 2020.

Bass legend Carol Kaye: “98% of bass parts cut in Hollywood in the '60s were done with a pick on flatwound strings”

McCartney plays with a pick - he did OK.

she should know, because she did all of them!

It depends on the song. Sometimes I play with a pick, someone's I don't.

Carol has a few more recording credits than he does. He's good, but she's the mistress of the bass.

Fingers, thumb pops, picks---whatever works for you is fine.

Whatever suits the song. I'm 99% finger, but sometimes you just need a pick to get the right sound.

Those 60's recordings do have a certain uniqueness to them and a lot of that comes from the picked bass.

the flatwound strings are an important a part as the pick!

plus carol hooked up a mute under the pickup cover to dampen any overtones...pure thud 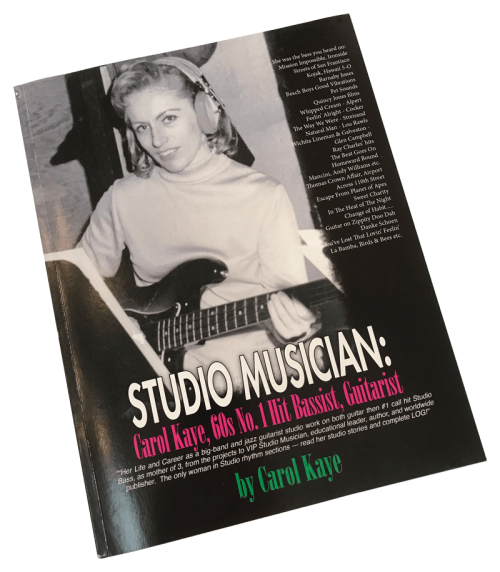 Some very well-known bassists used big heavy felt picks, others used standard guitar picks, while others (hello James Jamerson!) used fingers exclusively. It's all about what sounds "right" in the end, no?

Hux Brown, the legendary guitarist with Toots and the Maytals (who also played on many classic recordings wth other reggae artists) said that the studio bassists always put a piece of foam under the bridge so the strings wouldn't ring out, but by the later 70's and 80's, that practice seemed to have fallen away. Robbie Shakespeare, Family Man Barrett, Richie Daley of Third World, and many others never used a foam insert when I saw them play live.

The song should lead what gets played, what to play it with and how it's played. The only limits an artist should place on themselves are self imposed boundaries that ironically increase creativity. No artist should listen to rules that others place on them unless they are commissioned.

"It's music theory, not music fact and there are no rules." - Eddie Van Halen

At 3:45 in this video Eddie Van Halen talks about playing slide guitar on a nylon string.

I have to agree about the 60's bass 'sound'. With the graffiti band, the only way I could come close was with a very large, triangular bass pick and some palm muting to achieve the brief "thump" a lot of those songs had.

"Sleepwalk" and others required finger picking, but at least I did not have to adjust the tone.

I should think the point of the flats and the muting was to keep unintended and unwanted frequencies produced by the bass from muddying and obscuring the soundstage in recordings, resulting in greater clarity as other parts of the mix could shine through. Picking the bass gave definition and an audible higher transient to the less sprawling and resonant tone which resulted - a note which would be heard through transistor radios.

Clearly the combination worked - but it’s not necessarily something that would translate to live performance, where the greater range of an unfettered bass tone would fill out and energize the proceedings.

This was going around Facebook a while ago. Even tho I don't use a pick -- it's a legit way to play, yes to Mc Cartney, etc. Even the original killer bass solo in My Generation sure sounds like a pick... but I don't know for sure./

I began playing the bass as a guitarist, meaning I used a pick all the time. I got schooled by a real bassist in the 80's, and I've been predominantly using fingers ever since. There are instances where I will use a pick, especially when covering a song where a pick was used on the original recording. Other instances where I might use a pick are when the bass part calls for very fast staccato lines, and my fingers just can't pull it off.

So I'd say it's O-Kaye to use a pick when necessary. It's actually a "to each their own" kind of thing, and if it's working well by using one all of the time, go for it!

I had a lot of fun kicking back and playing the bass for three years in a rock band. It actually helped me as a guitarist, because it made me far more aware of what the drummer was doing. Locking down the low end rhythm (with the drummer) is a thing of real beauty!

Being a six-stringer first, I played bass with a pick for a long time, until I realized I was guilty of playing the dreaded "lead-bass". After that(and maybe about the same time as I took up fretless) I started in with the fingers. What I discovered with fingers is I have to think about what to play, and my parts got cleaned up considerably.

Wanna hear textbook lead-bass? Chris Hillman did a lot of it in the Burritos, and a lot more with the Byrds.IMO Lead-bass does indeed have a niche in rock, particularly three-piece power stuff, where there's a lot of space needs filling, but otherwise, less tends to be more. All that said, I have found that holding a "phantom" pick and picking with the RH index- finger nail, gives a credible simulation of a plectrum when that feel is called for. YMMV

Despite my evergreen love and appreciation for Chris Squire - who not only picked the sucker, but ran Ricbass output to a Marshall stack to capture high end - I've never thought I should play bass with a pick.

Not that I've generally been much of a bassist anyway...but I just never had the instinct to make it a (very) busy lead instrument. I have gotten better over the years: playing bass on my own stuff in the studio, working out what I consider appropriate basslines for some of my songs, and a bedrock appreciation for the low end of the rhythm section have helped. I've also been attracted to the sound of particular basses, and getting those basses has inspired me to develop a more complete bass approach. (And yes, one of those basses is a Ric 4003.)

I'm endless fascinated by the variety of textures and tones available with different right-hand digits - even parts of those digits. My favorite tone, especially on the majestic White Falcon bass, is produced by the side of my thumb. On the Ric, fingertips produce better tone (to my ear). Fretless/tapewound and 5-string bass call for different articulation.

Occasionally I'll see how a good stiff pick sounds, and I guess I'd use one for parts needing that crisp articulation. But in general, I'm not pick-y.

In fact, I seem to be going the opposite way. On the 8-string guitar (which goes down to the F# just a step above the low E of a bass), I often find myself using bass finger techniques on the low strings (especially on what are clearly bass-function parts), somehow switching to pick or fingerpicking for more guitaristic bits on the rest of the guitar. For lead-ish runs that extend over the span of the instrument, I will of course pick the low end. But my tendency on the instrument has been to use the low end as bass counterpoint to the rest of it - rather than to djent along with 8-string open-4th metal juggernaut chords.

I love plectrum bass tones, especially on Black tapes, just ahead of the pickup...keep a crisp attack angle, get a nice clear thump.

I agree "plectrum on flats" helped a lot to make better recordings before technology changed to 8, 16, etc. multi-track. No different than flats being used on guitars to reduce finger noises and lots of extra retakes.

I'm a frustrated lead guitar player at heart, and I take it out on the Electric Bass with smooth Black tapes.

I've always played bass with a pick. The again, most of the bass parts I'm playing or emulating were played with a pick. And I only do flats on a bass.

I love plectrum bass tones, especially on Black tapes, just ahead of the pickup...keep a crisp attack angle, get a nice clear thump.

I agree "plectrum on flats" helped a lot to make better recordings before technology changed to 8, 16, etc. multi-track. No different than flats being used on guitars to reduce finger noises and lots of extra retakes.

I'm a frustrated lead guitar player at heart, and I take it out on the Electric Bass with smooth Black tapes.

Always a fan...you would be familiar with the Hot Tuna "Burgers" album...I like that one a lot.

chris hillman was great because he was a prodigy mandolin player...way before taking up the bass for the jetset/beefeaters/byrds...his picking skills and melodic sense were already intact!

Casady is my single most favorite musician ever. hearing "Somebody to Love" was what made me want to play a stringed instrument. he didn't use a pick much, though. Phil Lesh did with the Grateful Dead...his whole sound is based on roundwound strings and a heavy pick.