A group portrait of the deep end of my stringed instrument excess,

wherein I try to spin this subset as a defensible and rational toolbox which covers every so many basses with virtually no duplication.

There are only six of them, but they represent...

One family member's whereabouts are unknown: a white Westone Spectrum assumed to be somewhere in Bloomington, IN, in the loose custody of my son. It covers the one gaping hole in this picture, ie a single-pickup more-or-less Precision instrument.

Otherwise, I am a little envious- I only have one.

I did have a "bass guitar" once upon a time ago, looked like a normal jumbo, but bigger- in every direction.

Hey man gotta be a Gibson mudbucker in there

I knew that would come up. The little Ashbory can be eq'd and played so that it is sonically indistinguishable from same. Though it looks a little Spinal Tap Stonehengy when you try to ride it.

I only have one.

Which is one more than I can really do justice to.

Hey man gotta be a Gibson mudbucker in there

While I (think I) get it, I've never been an enthusiast. Jack Bruce excelled in spite of that instrument. They all have tone controls, and can do a fair imitation, at least for recording purposes. And come on...a neck bucker on a Gretsch with a mud switch? Pretty dark!

I do cop to the lack of a Beatle bass, and maybe a J-Bass (which is ever my favorite Fender bass, but I don't seem to have any business playing one).

Looks like the Ashbory is ready for a "Church" gig!

Looks like the Ashbory is ready for a "Church" gig!

Ha! It did at that. Thanks to JustStrings.com and Road Toad Pahoehoe uke-bass strings, a temporary indisposition.

Well then both! Mixed denominational...

Well, I know that's a numerical prefix play, but it's also true. I played in the band for a kick-(sanctified)-butt Pentecostal choir for awhile. From a recording, you'da swore it was a black church - but it was mostly white.

The musicians were terrifying. They knew more songs than I knew there were songs - or maybe they could just play anything on demand. To give the key of some richly chorded jazz-blues-soul-funk inflected adventure we were about to embark on, one of the keyboardists just threw up some number of fingers - which was the number of flats they intended to play in. They were drawing from a deep and wide mostly black-church repertoire I previously knew nothing of.

Any band (or choir) member caught looking at sheet music would probably have been excommunicated - or at least seriously prayed over. It was about the most elevated musical setting (in every way) I ever played in. I gave up following all but the root chord (and I could usually find the 5th), which sufficed for funk descant rhythm chops. Mostly I dropped in my best imitation of Eric Gale lead commentary. Man, they made me sound good.

One of the features was a sanctified B-player, one of those guys with a funk soul rolling in grease - who improvisationally punctuated the sermons with organ emphases. He and the preacher worked like a jazz duo that way. He was a carefully coiffed and spiffed-up flight attendant, evidently gay, who flew in weekly from wherever he was to do Sunday morning.

Voices? Man. You could tap any overweight, crown-of-glory-bunned saintress in the congregation with a stick, and she'd rise up wailing like Mahalia Jackson. You know the church service in The Blues Brothers? That wouldn't be much of an exaggeration, except this church was three times that big, and located on the edge of a decaying smokestack Ohia town.

They honest-to-God forbade the saints from bringing their own tambourines; it's all but literally true that ushers would confiscate them at the door. But there was a supply behind the altar, which would be distributed to known rhythmically-competent indiwiduals.

Music was such a major part of the proceedings that there was only a loose "order of worship." The music directors chose a couple of tunes to start with, and they'd run as long as they needed to, till the preacher felt the need to appear, turn down the music, and lead on. But he was a musician as well, and a great singer. One Sunday the music started...and just never stopped. One song into another on an emotional flow that seemed never to end. It was fairly levitational. After a couple hours the preacher announced that this was the service, that nothing he had prepared mattered, and that anyone who needed to leave, could. Not many did, and it went for another hour or so. When we finally did leave, I'm guessing everyone felt as drained, purified, and energized as I did.

It was the durnedest thing.

(Now since this was over 30 years ago, few to no recordings are likely to survive, and all the principals involved have dispersed, these memories may safely trail a few clouds of glory, and it's possible they might have expanded a little beyond strickly gospel truth in the intervening years. On the other hand, this has all been emotionally accurate reportage with minimal embellishment of the core truths. And my artistic license is paid in full.)

A 7 string is missing.

I would have loved to have been able to go see Little Richard when he quit Show Business for the Church Business in the late 50's.

If you collect ‘em, who needs to worry about proficiency. That’s a mere technicality.

Nice indeed, but you most likely need something like these:

So that I don't respond with unnecessary considerations, please define "play bass."

These three seem to do it for me. Peavey T-40 (both humbuckers and single coils), Electra P-bass copy (with Badass bridge), and Epiphone Jack Casady Signature (semi-hollow; the top doesn't touch the center block, low-impedance pickup with three settings). 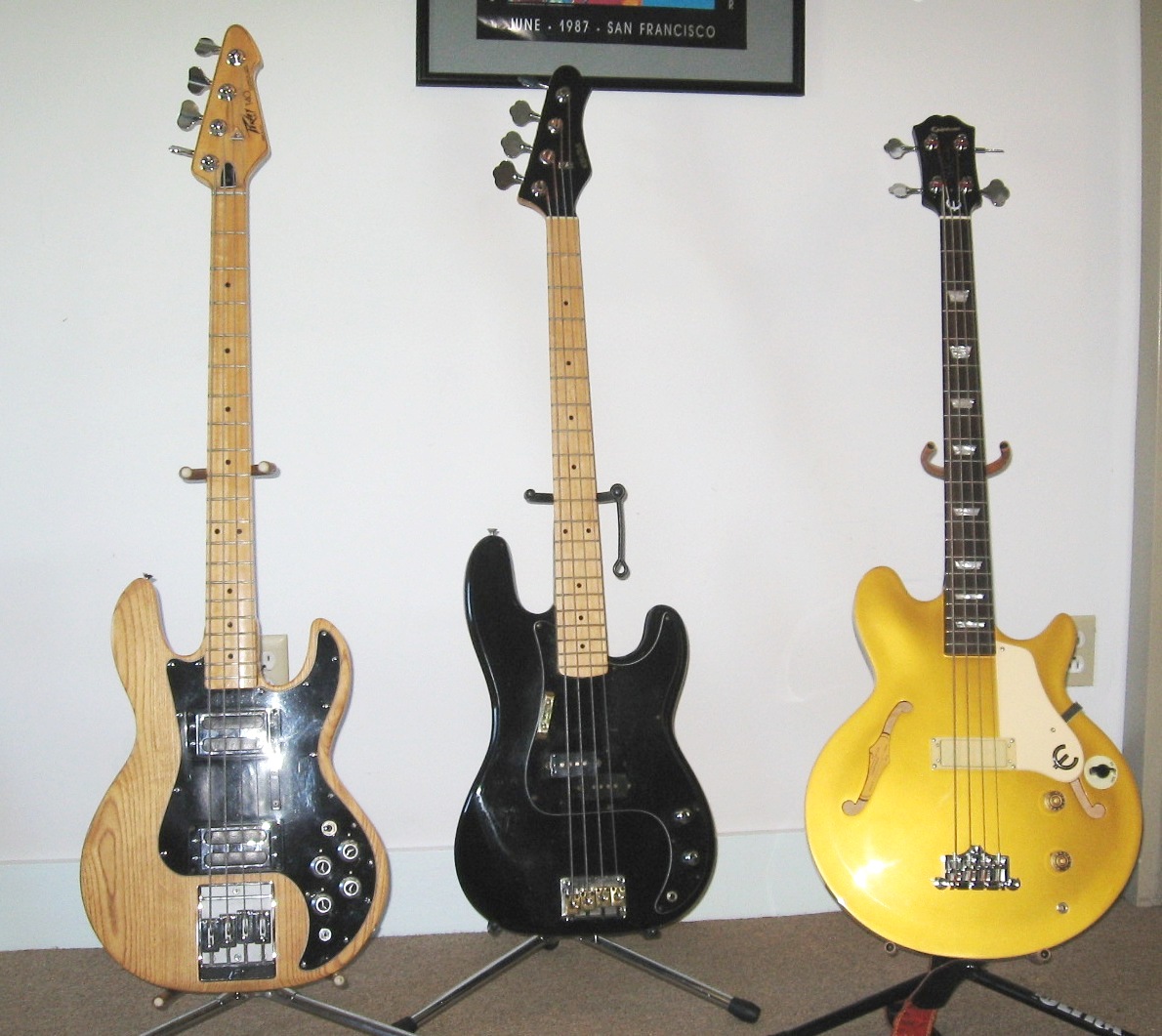 All three are long scale, but so far I haven't been happy with the sounds made by short scale basses in my hands. Except the Kala U-Bass. And I have no illusions that I could do justice to a 5-string. If 4 strings are enough for Casady, Jamerson and Jaco, I can manage too.

I have the guitar counterpart to the Casady bass, in the same gold, with the low-Z pickups. A very interesting guitar. And I used to have a T-60. We haunt a lot of the same instrumental price-and-value territory.

The 5-string bass was a target of opportunity at a price no one could refuse. I'd never gone looking for a 5-string. Pedagogical wisdom says the real benefit of the extended low range is not the low notes (that B is really flappy), but the more efficient fingerings it makes possible higher on the neck. As I'm a fan of education and the advice of the learnéd - in everything except my own musical adventures - I've spent zero time looking for those ergonomic efficiencies. I just like the 5-string for the occasional lower-end excursion. The low D gives an authority it otherwise lacks to a key whose available root on most guitars and basses is kinda in the midrange.

And I'm a sucker for lugubrious, foreboding Bm things, which are perfect for both baritones - and the lowest low on the 5-er. It not only haunts, it threatens with the certainty of doom.

Nice indeed, but you most likely need something like these

Oh, excellent set, GG. (Can we call you Jeege?) I did admit to the lack of a Jazz Bass, which might someday compel me toward at least a Squierly version - but when I think of J Bass, the J always means Jaco...and then I think "man, that would impose some expectations."

I love me some great (preferably clean) extended-range listening, like Sticks and Warr basses, particularly when driven by the likes of Chapman himself, Tony Levin, and Trey Gunn. The idea of piano-complete range and the harmonic/contrapuntal possibilities is liberating. But every time I've tried one, it just becomes obvious I lack either the hands (in size and finger independence) or brain for it. I don't seem coordinated enough to follow all the simultaneous lines across the intimidating plane of that fretboard. Kinda like a young driver's first exposure to a 12-lane highway.

Yeah, upright. A magnificent beast, but I would never develop the physical facility to tame it. I also - literally - don't have room for it. The Ashbory will have to suffice.

Your 3-piece collection does cover more range than my six, though. I guess my needs concentrate in the guitar part of the "bass guitar" conjunction.

Thanks Proteus. GG could have been for Gretsch Guitarist, Great Guitarist, Great Guy, but no, it stands for Gérald Garon. That gives you more optionsm, but "JeeGe" is O.K. I agree with your statement about Jaco, the founder of electric jazz bass. I might look foolhardy with my Marcus Miller signature jazz bass, but I don't pretend I will ever play like him, and I don't event try. I just find this is a very goof bass. I have also been attracted by the Chapman Stick, but, just like you, have been intimidated by the skill requirement. I do appreciate talented and skilled players like Tony Levin. I started playing the upright while I was younger (about 25), so this is a bit easier, although my old fingers do suffer a bit. Granted, my collection does not cover more range than your's. But I save a lot of space by having the 7 string cover it all. It can be played like a 4, 5, 6 and 7. I normally tune it like a Bass VI + low B. 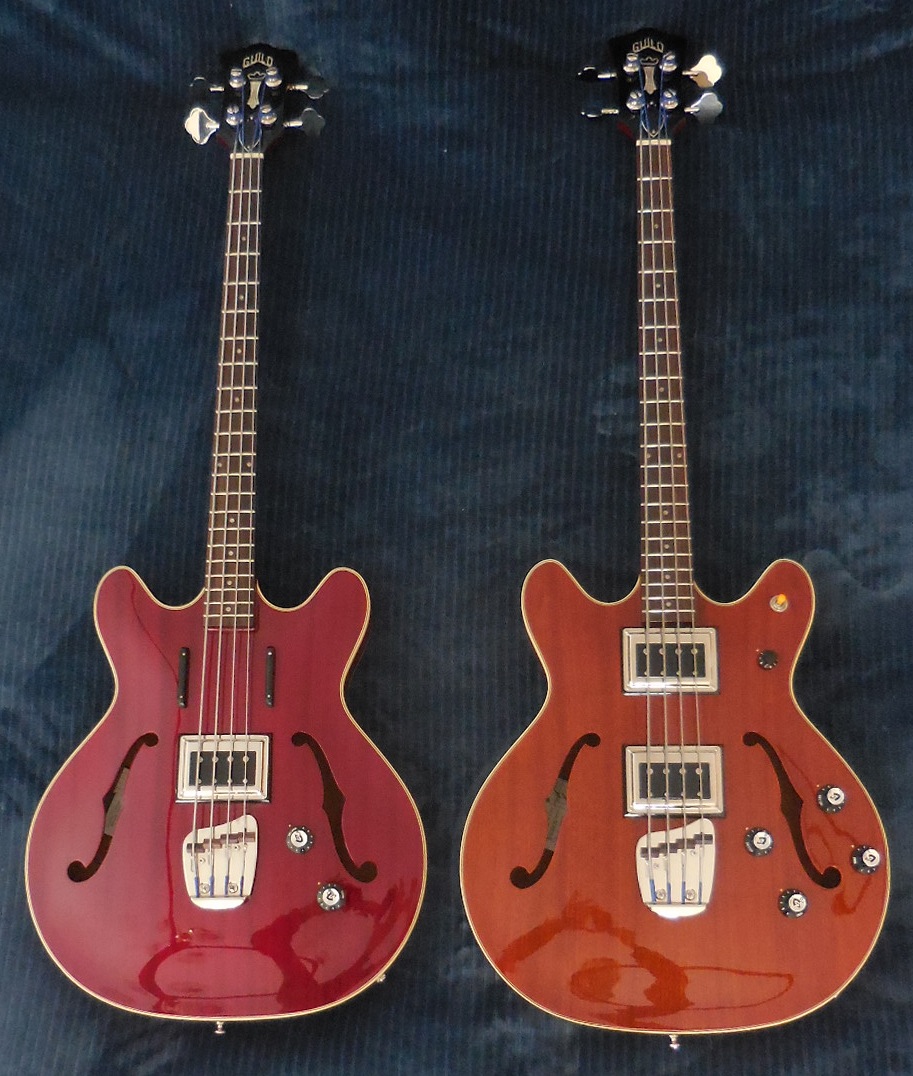